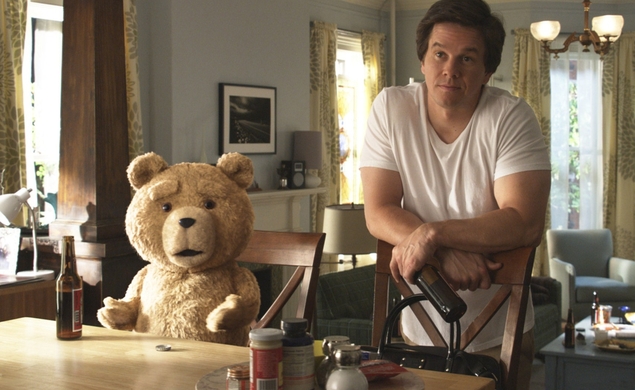 Grantland’s Wesley Morris eviscerates Ted 2:
“You never expect a movie to hurt you. Disappoint? Dismay? Depress? Fine. But when a movie has a field day asserting the humanity of a fake toy bear at the expense of your own, it hurts. I was led to believe, in part by the posters, that I was getting a movie about a character who’d be masturbating or urinating with his back to us. They should’ve turned Ted around since the emissions are aimed at the audience…As a filmmaker, MacFarlane makes a show of how easy it is to assume a black affiliation and cherry-pick from black cultural and political history. America just rode a wave of speculation and revulsion over Rachel Dolezal, the white woman who’s been living for years as a black one. With MacFarlane, the appropriation is both too much and not enough. Dolezal has remained committed to her performance. She believes she is what she says she is. But MacFarlane doesn’t appear to believe in anything. He just likes to mess around with things that still have value without seeming to get whether that value is greater than his jokes. It’s as if he doesn’t really know what he’s laughing at or care what race and sexuality and gender are. It’s as if he doesn’t know women or black people — just white comedy writers who love to make fun of them.”

The Guardian’s Damon Wise thinks Eli Roth’s Knock Knock is ushering in a new era of sexploitation films:
“In true Roth fashion, Knock Knock goes a little further than Fatal Attraction in its riotous second act (there isn’t really a third act, just a swan-dive into anarchy), but it is not the only film this year to deal with sexuality in a post-EL James era. ‘The fact that Fifty Shades of Grey is a phenomenon at all,’ says Roth, ‘just shows how mainstream it is, and it’s blasted the door wide open, saying sex is back in a big, big way. Now, sex has moved to the internet, and it’s on Girls, and that’s where people are getting it now. They’re not going to R-rated movies for titillation; you can get it on your phone. But that kind of subject matter is coming back in a big way.’ Indeed, Roth talks spiritedly of the ‘sizzle and charge’ of 80s erotica, citing the early films of Adrian Lyne and Paul Verhoeven as a reference. But if Knock Knock does proves to be our Fatal Attraction, just as Fifty Shades is our 9½ Weeks, there are a slew of imminent releases that go back even further, to the golden age of sexploitation. Generally credited to B-movie maestro Russ Meyer, who pushed the boundaries of the sex comedy with his near-plotless 1959 ‘nudie cutie’ The Immoral Mr Teas, the sexploitation genre reached its zenith in the 70s, when porno chic made Deep Throat a cocktail-party talking point and Sylvia Kristel’s X-rated Emmanuelle yielded seven sequels.”

Hopes and Fears’ Matthew Schimkowitz provides an epic history of the movie trailer:
“Movie trailers of the silent era aimed to give you the most bang for your buck. In the absence of sound, they put the cast and crew upfront, along with some sizzling ad copy. In the trailer for Charles Hines’ The Live Wire (1926), the spot promises the ‘Crackling Sparks of Fun and a Flash of Its High Voltage Thrills,’ before a montage of the film’s most extraordinary stunts. A tightrope walk across telephone lines, a car racing a train and men scaling tall buildings without a harness were the space ships crashing into buildings of the 1920s. These early previews revolved around text and visceral action scenes. The trailer for Colleen Moor’s Irene promises ‘Dazzling costumes! Brilliant Musical Comedy.’ It delivers with scenes of dancing, music, modeling, and comical misunderstandings. Editors of the silent era did what they could to get the word out without getting a word out. They wouldn’t have to work around this for long, though.”

Over at Little White Lies, our own David Ehrlich pits Pixar against Studio Ghibli:
“To dig a little bit deeper, it could be argued that Studio Ghibli tends to tell stories that happen to be animated, while Pixar tells stories that need to be. While Pixar has established their brand on the strength of movies about insects, talking fish, sentient toys, corporate monsters, and cars who have giant eyes for windshields, Ghibli has often located their work within a more recognisably human realm. As a result, the effects and ends of their animation tends to be more subtle: consider how The Tale of the Princess Kaguya revitalises an ancient piece of Japanese folklore by using charcoal and watercolour drawings in order to express a timeless sense of living myth. Or how From Up On Poppy Hill and Only Yesterday draw tender connections between the past and present in order to express the fluency between them. Or even how Grave Of the Fireflies, which vividly recreates the firebombed wasteland of Tokyo towards the end of World War Two, visits profound emotional trauma upon characters too young for child actors to convey without experiencing it themselves. Of course, Ghibli has made their share of fantasy films as well, but the recent live-action adaptation of Kiki’s Delivery Service is testament to the idea that even the studio’s more high-concept favourites tell stories that could theoretically be put before an actual camera.”