Alison Brie and Jason Sudeikis are Sleeping With Other People 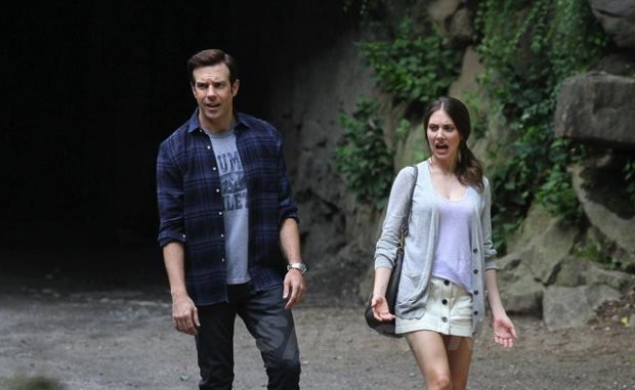 Multiple movies—No Strings Attached, Friends With Benefits, Casablanca—have been made about hot friends who decide to have casual sex just for funsies, who are utterly determined not to fall in love for whatever reason, and who then fall madly in love because how else do you end that story? Unsurprisingly, most of these movies are middling-to-awful. But, hey, here’s an idea, just bear with me—what if there were a movie about two friends who AREN’T sleeping together, because they’re sex addicts and want to preserve their friendship, but they have massive sexual tension, so they try to navigate that while rolling on ecstasy at a child’s birthday party together? Yeah?

That’s the premise of Sleeping With Other People, an indie rom-com that premiered at Sundance and actually looks pretty delightful and witty and smart, if not a little predictable. The inimitable Alison Brie and the slightly less-inimitable Jason Sudeikis are Lainey and Jake, two highly promiscuous people who lose their virginity to each other in college, then bump into one another at a sex-addicts meeting years later and decide to start hanging out constantly, sans sexual intercourse. Both are incredibly charming in the new trailer that dropped today, and as such I’m buying into this entire conceit, even if I’m really tired of movies wondering whether men and women can be friends when obviously the answer is no because baseball.

It also helps that SWOP (does that sound dirty or is this movie just really getting to me?) is written and directed by Leslye Headland, who helmed 2013’s caustic bacchanalia of bad female behavior Bachelorette. According to Headland herself, Sleeping With Other People is “When Harry Met Sally for assholes”—watch this trailer to find out if you’re one of those assholes (I am):

The trail of the tape
Title: Sleeping With Other People
Director: Leslye Headland
Screenwriter: Leslye Headland
Cast: Alison Brie, Jason Sudeikis, Natasha Lyonne, Adam Scott, Andrea Savage, Jason Mantzoukas, Amanda Peet
Release date: September 11, 2015
The entire trailer in one line of dialogue: “You gotta see the way I eat an avocado. You’d be like, ‘Do that to me.’ ”
The entire trailer in one screengrab:

Reviews out of Sundance cited Sleeping With Other People’s relative lack of bite when compared with Headland’s Bachelorette—Movie Mezzanine’s Charles Nash called it “a more conventional picture than Headland’s debut: sweeter, messier and far more determined to charm than to provoke,” while our own Kate Erbland, over at IndieWire, wrote that “the very amusing and genuinely sweet Sleeping With Other People turns down the raunch levels just enough to allow actual affection to enter the equation.”