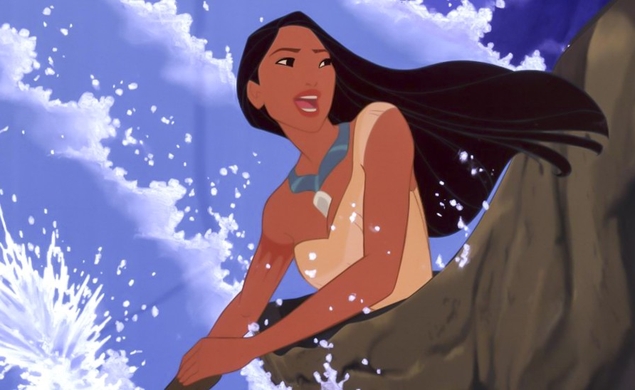 The Atlantic’s Sophie Gilbert defends Pocahontas 20 years later:
“When Pocahontas was released on June 23, 1995, the criticism it received for taking historical liberties with Pocahontas’s age and relationship with Smith largely overshadowed the fact that Disney had, for the first time, based an entire picture around an adult female, let alone a woman of color. It was also the first time the studio had produced a film about a real person. The movie might have fudged some facts to allow for a compelling romantic story, but it had a progressive attitude when it came to interpreting history, depicting the English settlers as plunderers searching for non-existent gold who were intent upon murdering the ‘savages’ they encountered in the process. The film also seemed to embrace an environmentalist message, with Pocahontas showing Smith the absurdity of relentlessly taking things from the Earth instead of seeing its potential. It was a radical story about female agency and empathy disguised as a rather sappy romance, and amid the controversy that arose at the time thanks to the subject matter, many of the film’s best qualities have been forgotten. But 20 years later, its impact can be seen in the new wave of animated Disney films like Brave and Frozen, while Pocahontas itself remains a graceful and well-intentioned entry in the Disney canon.”

Over at The Hollywood Reporter, James Cameron pays tribute to James Horner:
“When I was doing Titanic, he had just done Apollo 13 and Braveheart. I thought, ‘I don’t care what happened, I want to work with James.’ We had this very cautious meeting where we were falling all over ourselves to be polite. We laughed about it so much in subsequent years. But we developed a very transparent means of communication which made for a great working relationship. He totally committed himself to the movie. He blocked out his schedule and sat down and watched maybe 30 hours of raw dailies to absorb the feeling of the film. asked if he could write some melodies. I believe that a great score really consists of something you can whistle. If that melody gets embedded in your mind, it takes the score to a different level. I drove over to his house and he sat at the piano and said, ‘I see this as the main theme for the ship.’ He played it once through and I was crying. Then he played Rose’s theme and I was crying again. They were so bittersweet and emotionally resonant. He hadn’t orchestrated a thing, and I knew it was going to be one of cinema’s great scores. No matter how the movie turned out, and no one knew at that point — it could have been a dog — I knew it would be a great score. He thought he had done only five percent of the work, but I knew he had cracked the heart and soul.”

The New Yorker’s Richard Brody asks us to free ourselves from the Cult Of Marlon Brando:
“A new piece in The Atlantic by Terrence Rafferty, ‘The Decline of the American Actor,’ is immensely thoughtful and stimulating. Rafferty brings to light a crucial fault line in the history of filmmaking and film criticism: the cinema, since its invention, has been haunted by an inferiority complex in the face of the theatre. That complex was first exacerbated by talking pictures, and it shows up in contemporary times in the kind of acting that gains critical acclaim and wins Oscars—showy, theatrical, imitative acting. Rafferty wonders ‘why so many good American roles have been going to English, Irish, Welsh, Scottish, Australian, and Canadian actors.’ His answer is ‘technique,’ which is to say, theatrical technique…The best American actors have been overlooked, by critics and peers alike, and Rafferty, in repeating that error today, replicates the misjudgments of years past. As he laments the decline of training—along with what he considers a concomitant decline in ‘American culture,’ which, he says, ‘isn’t providing a high level of sustenance right now’—Rafferty invokes another spectre that haunts the current cinema, the cult of Marlon Brando. Imbued with serious theatrical training, Brando is cherished for his theatrical impersonations, as in A Streetcar Named Desire, On the Waterfront, and The Godfather, when, in fact, his greatness is in his person, and shines through most clearly and forcefully in roles that depend least on impersonation—Guys and Dolls, Last Tango in Paris, and the Maysles brothers’ documentary Meet Marlon Brando. Brando was great not because of his theatrical training but despite it.”

Film School Rejects’ Scott Beggs on why “consumer comedy” hasn’t yet infiltrated movies:
“The simplest definition of Consumer Comedy is that it operates as effortless reference to something else. Most comedy requires the audience to know something about X in order to make fun of/raise a point about/offer a new perspective on X, but Consumer Comedy only requires the audience to know about X to get the joke….In fact, the only obvious element of Consumer Comedy that has injected itself into modern, mainstream comedy movies is the pop culture cameo. Mike Tyson in The Hangover, Lou Ferrigno in I Love You, Man, Bill Murray in Zombieland, the majority of human characters with spoken lines in The Muppets. They work because they bring something recognizable out of its element and into a new, wacky one. The reason ‘spoiling’ these cameos is so hated is because nearly 100% of their effectiveness comes from discovering them for yourself. Knowing that Murray shows up in the zombie comedy changes his appearance from a moment of joyous recognition to the arrival of another actor you knew was in the film. The cameo, by definition, is used to get mileage out of something that’s recognizable. It’s also been done for a long, long time. Much longer than the current bout of Consumer Comedy hitting TV has been around.”