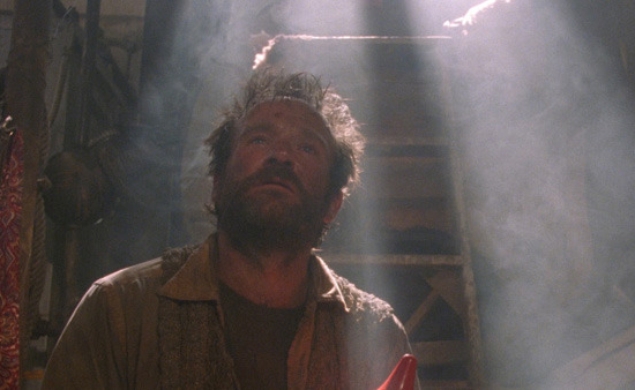 Over at Criterion, Bilge Ebiri looks back at Terry Gilliam's The Fisher King:
“If the Grand Central sequence is The Fisher King’s most notable set piece, it finds its curious opposite in another remarkable, though smaller, scene. Jack, Anne, Parry, and Lydia all go out to eat at a Chinese restaurant. In a surprisingly quiet, mostly static, eye-level master shot, we watch their evening proceed from initial awkwardness and suspicion to endearing slapstick and affection to, finally, Parry singing ‘Lydia, the Tattooed Lady,’ as the camera pulls back to reveal that they’ve closed down the place. The scene, marked by Williams’s inspired, almost Chaplinesque bits of physical comedy, is the most human one we’ve seen yet—far removed from the Dutch tilts, frantic pans, wide angles, and grotesque close-ups of the rest of the film. Instead, it’s a vision of patient bliss, the first time in the movie that anyone seems genuinely happy.”

Flavorwire’s Moze Halperin on what The Overnight and Who’s Afraid Of Virginia Woolf say about the evolution of marriage:
“Albee’s aim was to, poisoned bit by poisoned bit, destroy the delusions of the previous decade. In The Overnight, the couples, immersed in their era’s form of (normative) bourgeois liberal looseness (which of course has its own prison walls — though they’re made of a more supple material) are less desperate to meet perceived norms. They already have their spouses, they already have their (tangible) children. Rather, they’re interested in nonchalantly upending the relics of the Who’s Afraid era. Their increasing openness to experimentation, and the notion that it’s not a deal breaker but rather just a deepening of the conversation about what a marriage needs and what it lacks, leads them, through a very strange night, to constructive rather than destructive ends. When marriage isn’t a necessity — and when the end of a marriage wouldn’t be the end of the world — it might actually work.”

Grantland’s Dave Schilling has a “deadly serious” review of Lifetime’s A Deadly Adoption:
“A Deadly Adoption asks a deceptively simple question: How do people deal with tragedy? In the case of Robert, boozing and fornicating on countless book tours is his release. Sarah puts her energy into wholesome baked goods. Bridgette/Jodi deals with her grief by waving a gun around, pretending to be pregnant, drinking lots of coffee, and kidnapping little blonde girls. For some, stress eating is their cure for emotional turmoil. They ignore their promise, their potential, and their loved ones to stare blankly at the Domino’s Pizza Tracker (heavy metal theme, of course) as the status bar slowly switches from red to blue while ‘Nathaniel’ or ‘Margaret’ prepares the tools of their own self-flagellation. I bring this up only to remind you that sometimes what we plan is not what we achieve. Tragedy strikes us all equally. A Deadly Adoption posits the query: What will we do in the face of injustice?”

Vulture’s Kyle Buchanan on how Inside Out proves studios “shouldn’t fear” animated movies featuring female characters:
“This sort of team-up shouldn't be too much to expect from animated movies. Yet all too often, the people who make and market these cartoons seem fearful to push their female characters to the forefront. This year's CG-animated Home was a buddy movie that paired a little girl with a male alien; I'll let you guess which one of those characters DreamWorks hid from most posters. The charming teaser-trailer for Disney's upcoming Zootopia is narrated by Jason Bateman, who plays a fox, while the movie's actual protagonist, a female bunny rabbit played by Ginnifer Goodwin, gets nary a line. And after Disney execs changed the name of their CG-animated feature Rapunzel to the gender-neutral Tangled in the hopes that it would attract more boys, they pulled the same move with their long-in-development project The Snow Queen, retitling it Frozen and launching a campaign that buried its two female leads in so much snow that you could barely discern their gender (and then outnumbered them by adding three male supporting characters to the poster).”