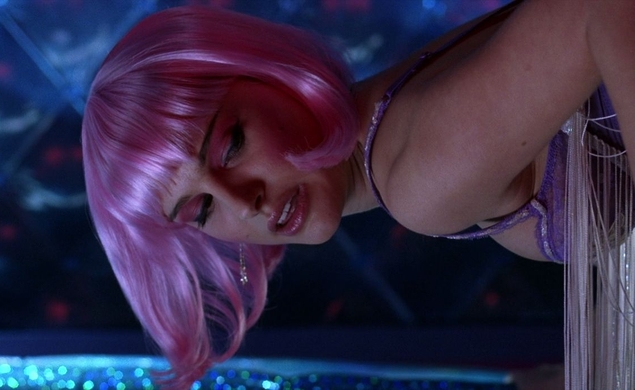 Let’s be straight: Patrick Marber’s Closer is no Glengarry Glen Ross. The stakes are smaller: sex instead of survival. The characters aren’t as elaborately built or as deliriously sleazy. There’s less of a sense of looking into a painfully real world and learning some truths about an industry, and more of a sense of artificiality being used to get at different truths altogether. But as modern successful stage plays adapted to the big screen go, Closer feels like the next best thing to Glengarry, in terms of taut, high-tension confrontations and a script that relies heavily on charisma, intensity, and performance to bring it across. Julia Roberts, Clive Owen, Jude Law, and Natalie Portman star, starting out as high-intensity people who fall into seemingly tight-knit couples. But when one pair splits up the other, all four participants get the chance to confront each other individually, trying to wheedle love, sex, acknowledgement, apologies, recognition, or something else entirely out of each other. There are some sweet sequences and some detached, spoiled-yuppie philosophical banter, but director Mike Nichols gets the film’s most crackling, breathless moments out of the scenes where one person desperately wants something from another that can’t be had, and fences frantically for a crack in the façade, an exploitable weakness, or some other access to power. Closer is uneven, but it’s an acting powerhouse with some tremendous scenes and a lot of daring, and it should be relatable for anyone who’s ever felt unrequited love, faded love, or unreturned lust curdling helplessly into anger. Closer airs at 1 a.m. Eastern on Starz Cinema.