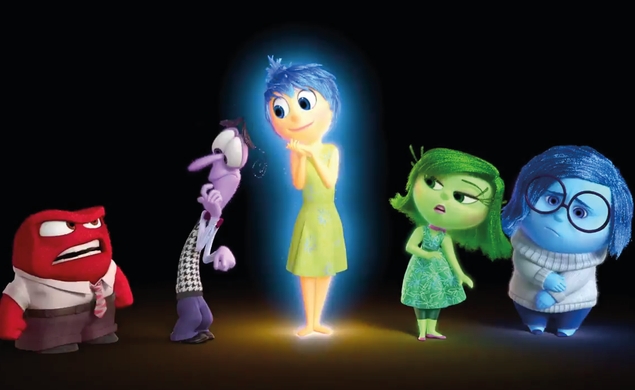 IndieWire’s Oliver Lyttleton on Inside Out and the vital importance of sadness:
“Yet the film’s value goes much further than pure entertainment, perhaps more than any film Pixar have made to date. On the most obvious level, the film provides a sort of basic vocabulary for children (and their parents) to talk about their emotions and what they’re going through. Some of the small handful of critics not bowled over by the movie have found fault as such —Ben Sachs of the Chicago Reader said it ‘feels like a clever educational short stretched to feature length’  I’d respectfully disagree, but there’s certainly some educational benefit to the movie’s necessarily simplified and incomplete but surprisingly rigorous metaphorical conceit. For a child to be able to grasp that anger is driving him or her, or even to be able to express to a parent that sadness is in charge of them for a little while, is as major a contribution to cultural discourse as Pixar have ever made.”

Bitchflicks’ Zoe Chevat weighs in on Mad Max: Fury Road and masculinity:
“While much hay has been made, and rightfully so, about the women in Mad Max: Fury Road, it was the men who began to catch my interest on a second viewing. Tough, monosyllabic, and utterly capable on the surface, the main men of Fury Road are also deeply flawed individuals who have been poisoned by the expectations placed on males in their (and, therefore, our) culture. Wrapped in a hypermasculine Trojan Horse of violence and war custom is a heady lesson about the dangers of ceding to those expectations, and about the road away from them and toward something like redemption. Here is a film where women are shown to be men’s combatative equals. Even more so, it is a film where the only way the men can escape their own oppression is to join up with, and occasionally defer to, these women.”

Movie Mezzanine’s Ryan Gimarc on Jaws at 40:
“Reading about the technical production of Jaws can sound silly in today’s computer-driven filmmaking climate: Mechanical sharks? Miniature cages to make the ‘shark’ look bigger? Even after seeing the finished product, these sound like the techniques utilized in a university student film, not by a director on his way to crafting some of the most celebrated action thrillers of a generation. Spielberg didn’t have the ability or budget to alter the image of the shark using a computer, but it hardly mattered. ‘Bruce’ spends so little time on screen that the money shot—in which the shark jumps onto the back of a boat and devours a major character—is the only obvious hat tip towards the animatronics at work. This was not only the result of an incredible special-effects team, led by Robert A. Mattey, but Spielberg’s important creative choice to withhold the actual shark for much of the film, even during the attacks (see the opening scene). This tactic, while not originating with Jaws, has foretold countless monster flicks in the decades since, from the director’s own Jurassic Park to other summer blockbusters like Super 8 (2011) and last year’s Godzilla. But while audiences last summer complained about Godzilla’s lack of screen time as merely a trope or a cop-out, the choice made in Jaws to keep the shark off-camera was a mix of budget necessity and narrative coherence: The film is as much about the characters above water as below.”

“18. Le Week-end (2013). Roger Michell’s acerbic relationship drama about an anniversary weekend in Paris is one of a rare haul of films that shows that growing old with a partner doesn’t mean the softening of interactive edges. Lindsay Duncan is brutal as Meg while Jim Broadbent is more rueful and needy as Nick. Let us also never forget Jeff Goldblum’s ridiculous posturing as Nick’s former student who has long since eclipsed him in the literary world. There are ruminative knee-bends.

25. Slumdog Millionaire (2008). I’ve since socially educated myself out of liking this film with its sloppy female role, but there was a time when it was my heart’s delight. It may not be cool to like movies that can be promoted using the term ‘feel-good’ but cool isn’t all it’s cracked up to be. Dev Patel’s hopeful smile as Indian slum-alumni, Jamal, provides hit after hit of charm as he goes through his rags-to-riches character arc. M.I.A’s since played-to-death single, ‘Paper Planes’, got us through an entire summer.”