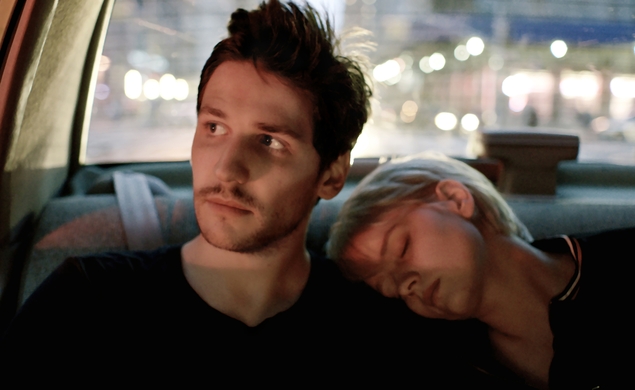 Buzzfeed’s Allison Willmore on why we need more stories, like Eden, about artists who don’t become rich:
“It’s fair to say that Eden is all about what happens when you don’t become Daft Punk, when your passion fails to solidify into something that’s at least a living, if not a source of fame and fortune. It’s not a movie about failure so much as one about how some affirmation can be worse than none, at least when it comes to figuring out whether you’ve stayed too long at the party. This puts Eden in undervalued territory alongside the rare likes of the Coen brothers’ struggling folk singer saga Inside Llewyn Davis and Amy Sherman-Palladino’s short-lived aging showgirl series Bunheads, as stories of what it’s like to realize you’ve probably already gotten as far as you’re ever going to get in chasing your particular dream. And while they’re not easily uplifting, these portraits are perfectly, intimately bittersweet in ways that a tale of triumph could never replicate…There are magnitudes more stories out there about characters who reach for the moon and are rewarded, even though most people who pick up a guitar or head out on an audition aren’t going to get to follow the same path. Which is why Eden offers such an unshakable sort of melancholy in showing how you can love something, and you can be good at it, but that doesn’t mean it’s going to love you back, and at a certain point being broke and hungry feels desperate rather than like a signal of creative integrity.”

Movie Mezzanine’s Josh Spiegel on animation as genre and medium in cinema:
“In a recent article profiling Inside Out, the new film from Pixar Animation Studios, New York Times journalist Brooks Barnes wrote the following regarding the state of modern animation and the burden that Inside Out bears in the industry: ‘The rival DreamWorks Animation has struggled badly in the time Pixar has been absent, leading to chatter that the computer-animation genre is in a funk.’; There is a troubling word in that sentence, one that has been a pet peeve of many animators and animation junkies over the years: ‘genre.; Animation (of any kind, not just the type created on computers) is not a genre; animation is a medium. Try repeating this a few times; turn it into your very own mantra. The distinction is important and necessary to clarify; if a writer for The New York Times is making such a gaffe, then it is clearly a widespread issue in need of fixing and clarifying.”

Stop telling Screencrush’s Matt Singer to turn his brain off during movies:
“Earlier this week, I wrote a piece called ‘Ranking Every Jurassic World Character From Dumbest to Least Dumb.’ The response to the article was generally positive; some folks who enjoyed Jurassic World even conceded that, yes, the people in it are pretty dopey. But there was a small vocal minority who hated this piece down to its very core, not because they necessarily disagreed with my opinion but because they objected to my having any opinion in the first place. One reader on Facebook suggested I should revise the list to include myself at the very bottom ‘for the colossal overthinking of a popcorn movie.’ That was a slight variation on the most common complaint, one any writer or cinephile who’s ever dared to criticize a big, moronic blockbuster knows very well: ‘Stop thinking so much! It’s a movie. Just turn off your brain and enjoy it.’ There’s an old expression about how ‘one person’s trash is another person’s treasure.’ Truer words were never spoken about the world of movies. Art is completely subjective and there really is no accounting for taste. As an open-minded guy who believes everyone is entitled to their opinion, I’m willing to accept almost any argument in favor of a movie; I may not agree with it, but I’d never deny someone their right to express themselves. The only argument I automatically reject on principle is ‘turn off your brain.’ If the only way to enjoy something is to turn your brain off, then it probably isn’t very good.”

Over at IndieWire, Infinitely Polar Bear writer-director Maya Forbes writes about how she turned her childhood memories into a fictional Sundance film:
“My mother is black, but I look white. My father came from a wealthy New England family, but the money hadn't trickled down and we were struggling. It was all pretty confusing. I tried to capture all these elements in a script over the years, but it was so complicated and I had to explain so much. The script was sluggish with explanations and justifications. The complicated emotional landscape was just not coming through. My father died in 1998 and my own daughters never met him. I started telling them bedtime stories about him. Then I started telling them the bedtime stories that he had told me when I was little girl. These stories were very vivid. And I realized that the way into a semi-autobiographical tale is letting it live. Because it happened. Don't justify endlessly: drop into it and go. Most importantly, tell the truth — about the anger, the ambivalence and the love. The first version of the script that I was happy with, that felt like a movie, was finished back in April 2008. As soon as I was done, I realized that I could not hand it off to someone else. What if it wasn’t funny? What if it wasn’t warm? What if it was maudlin? The idea of directing it myself scared me. I had brought a lot of emotion to the writing and I wanted to translate that visually.”