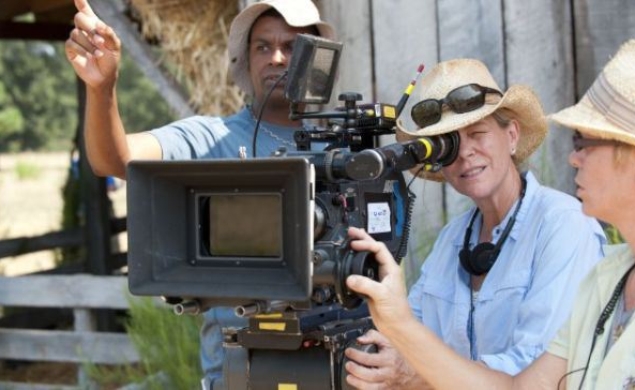 Rogerebert.com’s Jessica Ritchey says blockbuster directors need to change:
“Even Jurassic World’s director Colin Trevorrow has a similar ‘called up from the farm leagues’ story, having helmed a modest Sundance hit, Safety Not Guaranteed, that brought him the attention of some of Hollywood’s biggest players. And that's a story that never, ever happens to female or minority directors. Ever. Being a fan of blockbusters and of female directors means not getting excited at what should be good news like Michelle MacLaren being in talks to direct a Star Wars spin-off. Because you remember how she was also set to direct Wonder Woman and, depending on who’s doing the telling, either left or was pushed out over ‘creative differences’ with Warner Brothers. Even her being replaced on Wonder Woman with Patty Jenkins isn’t much of a consolation as it smacks less of wanting the best possible person for the job than not wanting to catch hell for firing a female director for Wonder Woman and replacing her with a man. And when rumors start that Marvel is considering Ava DuVernay to direct one of their properties, it means grinding your teeth at the surprising sudden burst of interest in her ‘experience’ for the job…Experience is the miserable Catch-22 that’s been slowly strangling blockbusters with increasingly unfortunate results for the past twenty some years. It’s what the fear and resentment of women and directors of color touching beloved toys cloaks itself in so it can’t get called out. Oh no, the problem isn’t that the director isn’t a white man, not at all, you’re just deeply concerned that they don’t have enough experience for a job. As if every new job doesn’t begin with a learning curve of some kind.”

The Huffington Post’s Lucy McCalmont has an oral history of Love & Basketball:
“Gina Prince-Bythewood, writer/director: In terms of the love scene, Monica’s first time ... the only note that I ever got from the studio during the filmmaking process was that when I shot that scene, they looked at the dailies and they said, they didn’t think she was enjoying it enough. And my argument was, it’s the first time and despite what the male fantasy might be, it’s not that great.

Stern: It may well have been a comment by one of my colleagues ... I’ll be honest, I don’t remember. I remember loving that scene and I have a vague recollection that she shot some additional footage to help that scene, I think to make it clear that she was enjoying it. But I thought the scene was great.

Prince-Bythewood: I always listen to ‘This Woman’s Work’ by Kate Bush. And then I happened to be -- while I was writing -- flipping across the channels and came across Maxwell’s ‘Unplugged.’ At the moment he was singing, ‘This Woman’s Work,’ and it wrecked me. Emotionally wrecked me. And I said, ‘I’ve got to put this in the movie.’ I was petrified and paranoid that someone was going to put it in before me. But I finally got a chance to make the movie and we put it over the love scene and it was -- like, it could not have been more perfect. The problem was it cost a grip of money and Maxwell’s people wouldn’t allow it to be on the soundtrack. So there was really no reason for the studio to say yes, because it didn’t help them at all. We kept it in for Sundance, and the reaction was pretty amazing and the studio was there. I tried, kept trying different songs, nothing felt as good. I finally went to Mike De Luca and I just said, ‘This is why it has to be this song.’ And he ponied up and paid for it and I’m so grateful for that because that song and that scene have become inseparable.”

Over at Slate, our own Matthew Dessem does a deeper dive into the recently found Laurel & Hardy The Battle Of The Century reel:
“Over the weekend, it was quietly announced at the Library of Congress’ festival of ‘unidentified, underidentified, or misidentified films’ that one of the most deeply mourned lost treasures in film history has reappeared. As reported by Pamela Hutchinson at Silent London, silent film historian Jon Mirsalis unexpectedly rediscovered the second reel of Laurel and Hardy’s 1927 film The Battle of the Century, lost for 60 years. The Battle of the Century is not only a crucial film in the careers of Laurel and Hardy, but it contains the biggest, best, funniest execution of the pie-in-the-face gag in cinematic history. For fans of early film comedy, this discovery is roughly the equivalent of Moby Dick swimming ashore carrying the Holy Grail….It’s not that the film disappeared from living memory so much as it passed into half-remembered legend. Pie throwing quickly became a cliché again, but those who’d seen The Battle of the Century agreed that it had once been executed perfectly. James Agee, Harold Lloyd, and John Ford all named it as one of their favorites, although they couldn’t agree on the title or director, and no one remembered the boxing match, just the pie fight. As Henry Miller (yes, that Henry Miller) put it, ‘There was nothing but pie throwing in it, nothing but pies, thousands and thousands of pies and everybody throwing them right and left.’ ”

The National Post’s Calum Marsh thinks the Sundance film is nothing but an “empty aesthetic”:
“ ‘It’s very Sundance.’ That’s been the refrain clinging to Me and Earl and the Dying Girl since its premiere this January at, yes, the Sundance Film Festival — where, the toast of Park City, it received the Grand Jury Prize, the Audience Award and a standing ovation. But simply premiering at the Sundance Film Festival does not a ‘Sundance movie’ make. You probably have a good idea already of what the appellation means: think irreverent banter and piped-in ukulele, primary-colored title cards and songs by Sufjan Stevens. Think breezy entitlement, and wry posturing, and white middle-class twentysomethings with first-world problems. Think people of color relegated to comic relief. You know by now what to expect of a Sundance movie. We all do. A type has hardly been so readily copied, or so easily parodied, since the western or the film noir.”