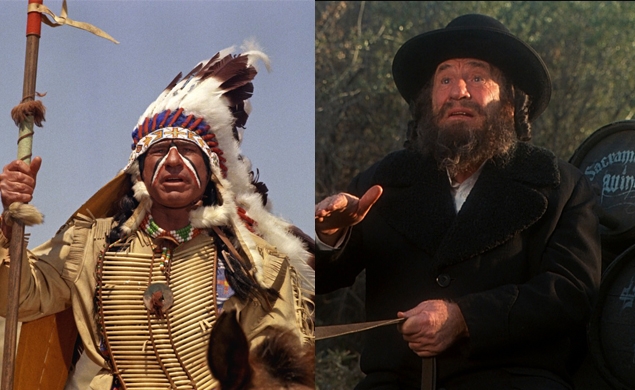 Released 19 years apart, Blazing Saddles and Robin Hood: Men In Tights represent two generations’ exposures to the parodic genius of Mel Brooks. (Spaceballs, released between the two, is another touchstone, but for the purposes of today’s Cable Pick Double Feature, we’ll pretend it doesn’t exist.) 1974’s Blazing Saddles is one of the undisputed classics of Brooks’ directorial filmography—along with the seminal Young Frankenstein, released the same year—while 1993’s Men In Tights, well, isn’t. Released toward the end of Brooks’ directorial run, Men In Tights is generally considered Lesser Brooks, but for a generation raised on mid-’90s cable TV (hi!), where it ran constantly, it’s a nostalgic delight, and a decent-enough inroad to one of film history’s most respected parodists. (It’s also a good way to appreciate the under-appreciated Cary Elwes outside of The Princess Bride, which his portrayal of Robin Hood lightly references.) Blazing Saddles, on the other hand, is an award-winning, much-lauded, and much-referenced—including in Men In Tights—comedy classic, made by Brooks at the height of his powers. But despite the discrepancy in esteem afforded to the two films, both Blazing Saddles and Men In Tights stick closely to Brooks’ established brand of ribald, see-what-sticks genre spoof; that one hits so often where the other misses is part of the grand, ephemeral mystery of comedy. Tonight Encore provides a opportunity to compare high and low Brooks, when it runs the two films back to back. (As a bonus for Brooks completists, the two films are preceded by 1983’s little-seen, Brooks-starring To Be Or Not To Be, which inspired one of the odder footnotes in Brooks’ career, “The Hitler Rap.”) Consider this double-feature an academic exercise, with the bonus of a bunch of laughs. Blazing Saddles airs on Encore at 8 p.m. Eastern, followed by Robin Hood: Men In Tights at 9:35 p.m.