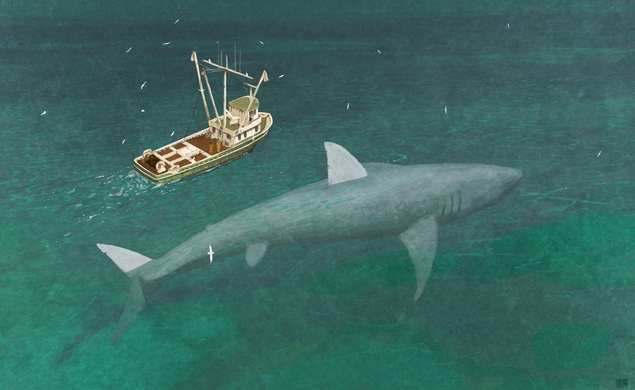 Everything’s coming up Milhouse for horror auteur Eli Roth these days. One minute, he’s directing the greatest thespian of our age (Keanu Reeves, as if I could possibly be referring to anyone else) in Knock Knock, what looks to be a filmic masterpiece of emotion and despair in the league of The Passion Of Joan Of Arc. The next, his cannibal parade of fun The Green Inferno snags a long-awaited release date of September 25 following a yearlong postponement. Today, even more exciting news comes to man-about-town Eli Roth. Variety reports that he has signed on to direct a film adaptation of Steve Alten’s 1997 book Meg: A Novel Of Deep Terror. It is about a giant killer shark. Let us all give glory to the higher power, however you may define it.

In this instance, however, “giant killer shark” might just be an understatement. “Meg” is short for megalodon, a species of colossal prehistoric shark that dwarfed the tyrannosaurus rex. It was big, like, scary big, known to eat whales in a single chomp. In the source novel, intrepid diver Jonas Taylor discovers that the megalodon series has remained intact through the present day by taking refuge in the warm-water vents of the Mariana Trench. (Some of the remaining megalodons have even developed bioluminescence to combat the darkness, meaning that these are no giant prehistoric killer sharks, but glowing giant prehistoric killer sharks.) But Jonas’ investigations into the megalodon presence inadvertently free them to escape the Trench and ascend to the navigable oceans, where they wreak havoc and eat many an unlucky beachgoer. In the source novel, the megalodon sets its sights on the Californian shores, but in an effort to up overseas appeal, the action has been moved to sunny, paradisiacal China.

Eli Roth’s the man who’ll bring this version of toothy terror to the big screen, with the full-throated backing of Warner Bros., hoping this summer tentpole may spawn a full franchise. While this announcement does conspicuously coincide with the unbridled box-office domination of Jurassic World this past weekend, Warner Bros. had been developing this script for some time. The project started at Disney in 1997, but has been floating around Hollywood for nearly 20 years. Meg, like Meg, has been biding its time, waiting until the cultural tides shift and it’ll be able to loose carnivorous mayhem on the world once more.