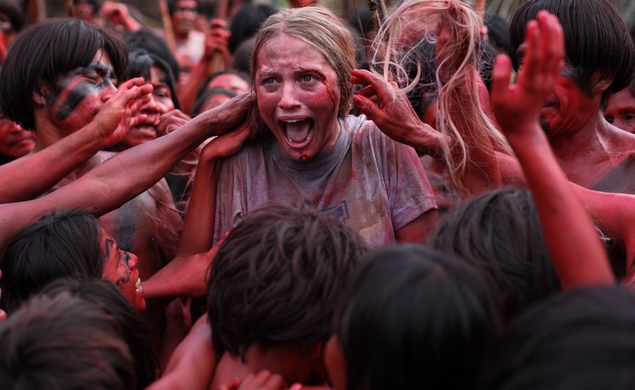 Last August, former News Editor Matt Singer seized on an opportunity to use the magnificent header image you see above and reported on the postponement of Eli Roth’s latest directorial effort, cannibal horrorshow The Green Inferno. The film was originally slated for a release in September 2014, but squabbles between distributor Open Road Films and financier Worldview Entertainment shelved the product nearly a full year after it debuted at TIFF. (Our man on the scene Scott Tobias liked it well enough, writing, “Several films into his career, Roth hasn’t made great strides in terms of style—if anything, this feels more like a first film than Cabin Fever did—but he’s a great student of the horror genre and he knows how to make entertainment out of appalling material.”)

A new report from The Wrap today indicates that Roth’s film will finally see the light of day, only one year behind schedule. The first new feature from Roth since 2007’s Hostel: Part II, The Green Inferno has a new distributor and an official release date: Blumhouse Pictures’ genre film label BH Tilt will loose Roth’s demon spawn on multiplexes come September 25.

The film sets a group of deluded student activists into the Amazon as their misguided efforts to save the rainforest acquaint them with a group of native inhabitants with a taste for flesh. It’s an old-school horror gorefest, just how Roth likes it, paying plenty of homage to Ruggero Deodato’s scandalizing snuff classic Cannibal Holocaust. The item from The Wrap includes a quote from Roth expressing his good faith in the film and its new distributor: “The Green Inferno is a wild, fun ride that took us deeper into the Amazon than anyone has ever taken a film crew,” said Roth. “BH Tilt is a forward-thinking label that is helping to redefine how genre movies can be released. I want to express my deep gratitude to the fans for their incredible support of this movie and to everyone at Blumhouse and Universal for making sure fans can experience the film in theaters across the country.”

Still on the horizon, Roth’s overseeing a remake of his directorial debut Cabin Fever and getting behind the camera for the astonishing-looking latest phase of the KeaNu Wave, Knock Knock. Though I am doubtful anything in The Green Inferno will surpass the cinematic excellence of Keanu Reeves saying “Chocolate with SPRINKLES!”, it's still a relief to see this film ascending from post-production purgatory. (Or rather, descending from post-production purgatory into hell.)