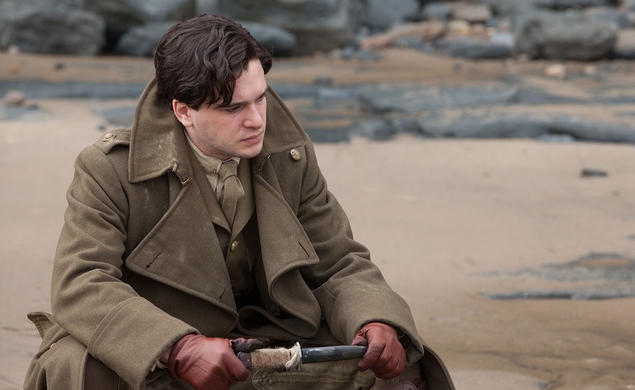 Grantland’s Kevin Lincoln on Kit Harington’s future as a movie star:
“What makes Testament of Youth notable, beyond its own merits and the fact that it marks the latest step in Vikander’s world-conquering ascent, is how well Harington plays his part. Looking like Vampire Weekend’s Ezra Koenig and acting like Jack O’Connell’s sensitive brother, Harington handles empathy, cockiness, charm, and horror with flexibility and skill. While there are some shared traits between Roland and Jon Snow — they both have good hearts, nice hair, and noble leanings — Roland’s a far more fearful and delicate character, and Harington shows some finesse in playing him.It’s not hard to imagine that he could have a long career playing both sides of the British leading-man coin: charming rogue and thoughtful lover. I think we might be surprised at how easy it is for Harington to ditch Jon Snow when the time comes, for two straightforward reasons: He’s surprisingly versatile, and when he cuts his hair, he looks like a different person than he does as a man in black. While he still might not have the insouciance of a Bond, I think he could have Colin Firth range, shuttling between more intense, high-pitched roles and lighter, breezier fare.”

Fandor’s Nelson Carvajal writes a personal tribute to his film fathers, paired with a video essay:
“But there was an elephant in the room. Something I never did tell my father. And now that he’s passed, I finally had to own up to it. It was simple: I missed my dad while he was alive. I was always too proud to admit that; I had convinced myself that I didn’t need him; that I was my own man; that I did it on my own. It didn’t really hit me until I started putting my ‘Film Fathers’ video essay together. As I arranged the clips to literally speak each other, albeit literally or thematically, I realized that I had looked up at these father figures of the silver screen for most of my life, to fill in the void left by my father. I needed my father for the sex talk. I needed my father to see me as a rebellious teen. I needed to see my father have a mental breakdown because of his ambition. I needed to see my father defeat the bad guys. Luckily, these movie dads gave me these lessons with larger-than-life gestures. And the movies did not just give me one father but an array of fathers, from all walks of life.”

Movie Mezzanine’s Ian Barr on the gleeful free-for-all of Gremlins 2: The New Batch:
“Of course, Hollywood sequels, remakes, and reboots that comment on the factors that produced them aren’t a particularly novel idea, but Gremlins 2 might be the most sustained and productive example of the meta-sequel. It helps that it’s a children’s film—outside of The Simpsons, I can’t recall a work of narrative that was more conducive to my own burgeoning comprehension of irony or self-reflexivity as a young viewer. Twenty-five years since its release, and a few less years than that since I first saw it, it feels just as inspired—one of a handful of films (Persona, Two-Lane Blacktop, Jerzy Skolimowski’s Le Depart) to truly earn the right to employ the meta-textual effect of the celluloid projecting it burning from the heat of fictional rupturing.”

Little White Lies’ Sophie Monks Kaufman wonders whether film can truly change the world:
“People are fearful of change. We seek reassurance in familiarity. We don’t want to feel the weight of a world tarnished by murder and rape and abuse and trauma on our shoulders. If there is hope for humanity then it will be through a chain of incremental lifestyle upgrades. These promotions tend to happen through encounters with people that inspire us through their example. For me, these people are storytellers – usually filmmakers. I don’t believe that all films take place in an escapist bubble floating above the tangible world. Serious, bold and talented documentary filmmakers are alchemists that turn the data-driven reports of the global news agenda into human stories with roots in the existing power structures of the world…We are not individuals independent of society. Intelligent progress depends upon finding a morally sound group to belong to, be that literal membership or spiritual fraternity. To run with [Joshua] Oppenheimer’s logic in the other direction: we need support. Among the guiding lights that uplift my thinking are the directors Mahdi Fleifel, Kim Longinotto and Joshua Oppenheimer. The films they make are very different, but each lets the gentle breeze of compassion ripple through subjects that would render many staccato with anger.”