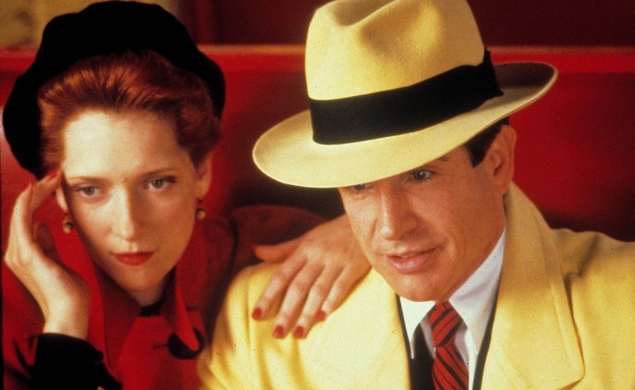 Over at Vanity Fair, our own Kate Erbland wonders why, as Dick Tracy turns 25, everybody’s forgotten the original prestige comic-book movie:
“Dick Tracy’s road to the big screen was bumpy, as the property cycled through attached directors (Steven Spielberg, John Landis, Walter Hill), possible stars (Harrison Ford, Richard Gere, Mel Gibson), and even studios (originally optioned by Paramount Pictures, it was made by Disney and released under their Touchstone label) for over a decade. Things turned around once Beatty came on board to direct, produce, and star in the feature, marking only his third turn behind the camera. A hard-core Tracy fan, Beatty was committed to making his film more of an homage to the comic strip than a singular adaptation. He didn’t go for the dark and gritty; he wanted something that looked like what it was, and Beatty’s desire to do just that turned Dick Tracy into one of modern cinema’s best adaptations of the two-dimensional storytelling form.”

Screencrush’s Matt Singer on Jurassic World and the rise of selective sequels:
“Jurassic World doesn’t just disregard its predecessors because it’s convenient; it does it because it’s essential to the internal logic of its story. It can’t exist in the same universe as The Lost World or Jurassic Park III. So regardless of Trevorrow’s wishy-washy answer, Jurassic World ostensibly writes them out of continuity (or at the very least ignores them). In doing so, it becomes the latest in a growing and troubling trend in Hollywood: the rise of what Trevorrow calls a ‘direct sequel,’ but is probably more accurately described as a selective sequel…Take, for example, Bryan Singer’s Superman Returns. Singer was a big fan of Richard Donner’s Superman and Superman II, and he designed his own movie as a sequel to just those films, which are explicitly evoked in numerous ways. The opening credits mimic the ones from Donner’s Superman, and utilize the original Superman theme by John Williams. Marlon Brando, Jor-El from the first movie (but not III or IV) makes a cameo appearance — even though he’d died two years earlier (his performance was cobbled together from outtakes from the Donner film). Meanwhile, the non-Donner movies are implicitly expunged from the canon; there’s no mention of Lana Lang (or her becoming Perry White’s secretary), or the power struggle at the Daily Planet.”

Vulture’s Lauretta Charlton looks at Asif Kapadia’s struggle to make the Amy Winehouse doc Amy:
“‘I’m pretty sure the people in the U.S. have never seen those images of young Amy. That intelligent, funny, special girl. Bright-eyed, healthy-looking. Even in England, people haven’t seen her. She was great, she was a good kid, she was human.’ But, says Kapadia, the heart of the film is about bullying and getting people to understand how picking on someone is dangerous. ‘The audience is partly to blame for me,’ he says. ‘The paparazzi may have been hounding her and the media may have been making fun of her, but we laughed and we clicked on the videos, and we commented on it and shared it. It just became so easy to make fun of this kid. She was just a kid who was taking it all in, and the more pressure and the more nastiness, the more she self-medicated to numb the pain. There’s a point in the story where I think the mirror turns back to us and we think, We knew what was going on, and we all took part in it. We were all complicit. I just hope we think twice before we treat someone the way we treated Amy because it will happen again. It’s probably happening right now. I remember somebody saying to me at the beginning of this film, ‘Why do you want to make a film about a junkie?’ And I just said, ‘That’s exactly why I want to make this film, because you just said that, and I can’t believe you just said that.’ ”

Film School Rejects’ Rob Hunter on 33 things he learned from Joe Carnahan’s The Grey commentary:
“7. Joe Anderson was under the impression that he was going to be fired after the first day because he thought Carnahan hated him. ‘He wasn’t the actor I hated,’ clarifies the director. ‘It wasn’t him.’ Barton adds ‘You know who you are.’

8. Flannery’s (Anderson) opening conversation with Ottway on the plane features a nod to Timothy Treadwell, the activist profiled in Werner Herzog’s Grizzly Man, but Carnahan thinks most people miss it. ‘I really wrote that line for my brother because I knew he’d get a kick out of it.’ ”