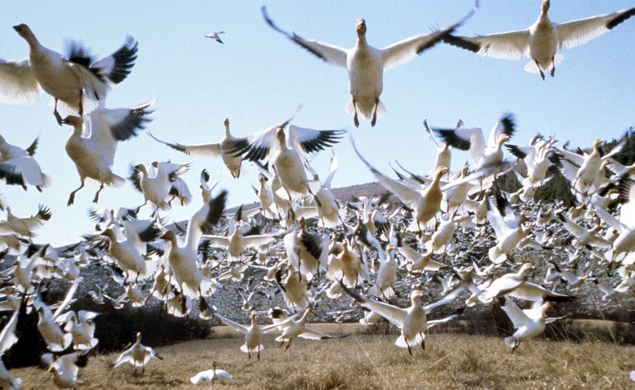 There are several potential inroads available to documentarians looking to convey something about the natural world—anthropomorphization (Disney Nature), education (David Attenborough), politicization (The Cove and Blackfish)—but pure visual spectacle is usually the most dependable tact when it comes to nature docs. Jacques Perrin’s Oscar-nominated 2001 feature Winged Migration takes this adage to heart, concerning itself with little beyond capturing various migratory birds in action throughout the seasons, using frequently breathtaking aerial footage that was shot over four years and spanning seven continents. Frankly, there’s not a whole lot to Winged Migration beyond that footage—the bits of heavily accented, desultory narration from Perrin achieve little besides breaking up the reverie from time to time—but for bird-watchers, photography buffs, or just those looking for a little film-assisted meditation, the visuals are plenty to sustain a mindless yet strangely emotional 98 minutes. Achieved primarily through cinematography, editing, and scoring, Winged Migration is precisely calibrated to evoke slack-jawed awe, and an appreciation for the natural world and its most unencumbered inhabitants, without pushing its agenda too forcefully (or, really, at all). It’s an ideal after-work kick-back-and-relax movie, which is why it’s airing at 6:25 p.m. Eastern tonight on Movieplex.