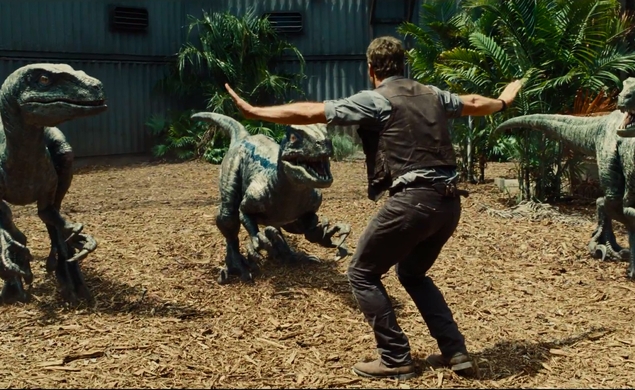 Jurassic World has wrecked—er, rexed? so sorry—the hopes and dreams of a little film called Avengers: Age Of Ultron, snatching away its second-best-opening of all-time title with one flick of its surprisingly short little arms. The fourth film in the Jurassic Park franchise (though it sure pretends it’s only the second) pulled in a staggering $204.6 million at the domestic box office this weekend, enough to knock over Age Of Ultron from its second-best spot, but still not enough to best Marvel’s The Avengers from No. 1 (that film made $207.4 million in 2012).

The record smashes don’t stop there, though: Jurassic World is now in possession of a wealth of precious new box office prizes, like the highest all-time Saturday gross ($69.7 million), the highest theater average for all wide releases ever ($47,871), the best June opening of all-time, and the fastest film to reach $150 million EVER, EVER, EVER. The movie made a lot of money, but it also made it fast. This thing moves like a raptor unencumbered by a life-long bond with Chris Pratt. It’s zippy.

Other things happened at the box office this weekend, but all seem destined to be forgotten in the face of Jurassic World’s massive and goat-breathed roar into the annals of movie history, so let’s celebrate them while we can.

Spy took second place with $16 million, enough to push its total worldwide take over $100 million. Congratulations, Spy! You get a can of Barbasol filled with pilfered DNA.

San Andreas dropped to the third spot, pulling in just over $11 million, enough to push The Rock-starring disaster flick into $300 million territory worldwide. Congratulations, San Andreas! You get a quivering spoonful of Jello.

The rest of the top 10 stayed relatively static, with the exception of Love & Mercy, which added 92 theaters to its limited run, edging it over $1.7 million for the weekend and earning it the number 10 spot in the overall chart. Congratulations, Love & Mercy, you get a CD of John Williams’ original Jurassic Park score.

Aloha finally dropped out of the top 10 after just three weeks at the box office, earning less than $1 million over the weekend. Its total take is now hovering just under $19 million. Congrat—erm, nevermind. Here’s a big margarita from Jimmy Buffett’s Margaritaville, just one of the amazing chain restaurants you’ll find within the boundaries of Jurassic World. Tasty!

Sundance winner Me And Earl And The Dying Girl began its limited run this weekend, opening in just 15 theaters to a total domestic take of $210,000. With a healthy per-theater average of $14,000, the film appears to have capitalized on an advertising blitz that somehow didn’t hinge on “it’s not Jurassic World.” You guys get this vintage Jurassic Park T-shirt worn by Jake Johnson in the film. Feel free to make it say “Jurassic Bark” or something.

As the week’s only large-scale opening, Jurassic World had plenty of holdover films to chomp on, but next week sees the release of Pixar’s very well-regarded (and deservedly so) Inside Out, so while the dinosaurs will likely remain on top, candy-colored feelings and such just might take a hearty nip at their heels. Is there an animated emotion for mild rivalry?