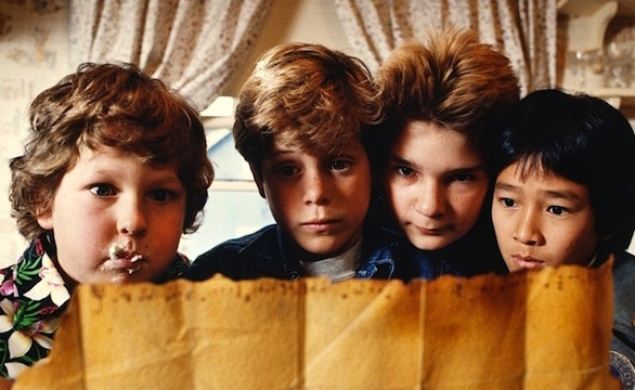 IndieWire’s Sam Adams owes a debt to The Goonies:
“The Goonies, which celebrated the largely unobserved 30th anniversary of its release this week is, how shall I put this, an enormous pile of junk. In recent years, a kind of perverse cult has grown up around the film, composed of people who loved the movie as kids and have carried that fondness into adulthood with them, but nostalgic fondness can't erase the utter shoddiness of this hacktastic crapfest. That said, I owe The Goonies a profound debt. You could say it changed my life—not by being great, but by being terrible.”

Over at Movie Mezzanine, Bilge Ebiri expounds on the virtues of Orson Welles’ The Trial:
“But maybe that’s one reason why The Trial possesses such a unique place in the director’s filmography. Because, for all our anticipation of high Wellesian style, The Trial constantly upends our expectations. It’s a film of unsettling opposites. Its fevered bursts of style are offset by eerily long, subdued dialogue scenes. For all the grim portent of that opening, the film also works as a dark comedy. And even though it places us firmly within the mind of its protagonist—that Kafkaesque cypher K, at once Everyman and no man — the film also undercuts that conceit by suggesting that K might not always be the innocent he pretends to be. Indeed, Welles uses his dream narrative to bring us face to face with a very stark reality: That, in the modern age, we are often responsible for our fate, and for our own downfall. Kafka’s symbolic novel of bureaucracy, law, and guilt captured something universal about the human condition. Welles literally explodes that to create a parable of the twentieth century, one that both embraces and destroys the Cult of the Individual.”

The National Post’s Calum Marsh reminds us “pssst, movies aren’t real”:
“Last Friday, June 5, a lot of eagle-eyed nostalgists celebrated the 30th anniversary of Ferris Bueller’s day off. I don’t mean the 30th anniversary of Ferris Bueller’s Day Off, the feature film — that occasion arrives next summer, three decades after its premiere on June 11, 1986. I mean the 30th anniversary of the fictional holiday. Now, you might object, if you know the movie well, that over the course of its 103-minute running time nobody specifies the date. You’d be right. But the amateur statisticians of BaseballProspectus.com have scrutinized the historical records, cross-referencing 1985’s game logs with play-by-play soundbites and what we know of the match attended by Bueller and his friends. From this wealth of data our analysts have derived a seemingly ironclad truth: ‘Ferris Bueller and his pals,’ the report concludes, ‘were at the June 5, 1985 tilt between the Cubs and the Braves.’ Thus the famed Day Off was taken 30 years ago last week. But hang on a minute: after the baseball game Bueller and company are whisked downtown to enjoy the musical revelry of the Von Steuben Day Parade — and the city’s annual Von Steuben Day Parade, as Bueller fans swiftly pointed out, doesn’t take place until September. (A calendar briefly glimpsed on the school principal’s office wall, meanwhile, suggests it’s sometime in May, confounding everybody further. Madness.) Of course to the sensible-minded this information isn’t contradictory. Indeed, the reality is perfectly obvious: the baseball sequence and the parade sequence were simply filmed on different days. (Bueller’s visit to Wrigley was shot on Sept. 24, actually, but archival footage of the June 5 ‘tilt,’ as the Baseball Prospectus fellows rightly discerned, was spliced together with the on-location material to make it seem as if they were there.) Ferris Bueller’s day off, like any movie day, was a composite. It isn’t real. Its apparent contradictions don’t need to be reconciled.”

Den Of Geek’s Ryan Lambie sends up Kyle Smith’s NY Post nonsense: “Cats are not capable of understanding Rambo: First Blood Part II”:
“The first time I saw Rambo: First Blood Part II, it was on a Contec KT-8135, 14-inch television. When the credits rolled, I sat there in wide-eyed amazement at the guns, the explosions, and Sylvester Stallone's luxuriant perm. Then I turned to my cat, Mr. Cobretti, and was stunned to discover that he'd fallen asleep. This, in a nutshell, sums up the inherent problem with cats: they're simply not capable of understanding or appreciating the power of Rambo: First Blood Part II. Let's face it, Stallone's 1982 sequel is a male fantasy picture, a soul-rousing action piece designed to wash away the self-doubt of the more introspective First Blood. But the sight of John Rambo tooling up and heading back to Vietnam to win the war singlehanded means nothing to your average domesticated feline.”