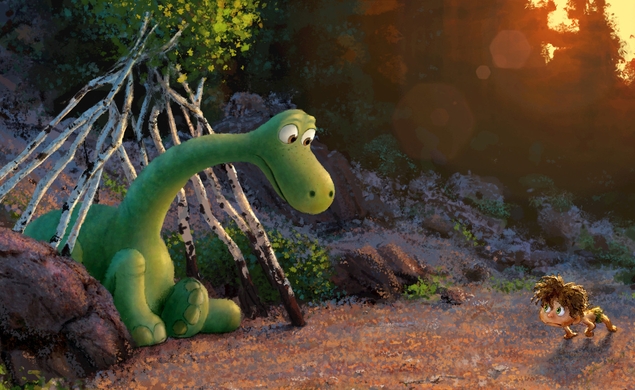 Last week, our dauntless News Editor Rachel Handler exhaustively catalogued the many setbacks and personnel switch-ups that have beset the production of Disney-Pixar’s The Good Dinosaur. It was awful decent of her to go through the trouble, because now I don’t have to! Suffice it to say that a whole mess of trouble has conspired to keep the animated feature from theaters, and if you’re interested in more detail, there’s your link. But as the great Sam Cooke once sang, “It’s been a long time coming, but I know a change is gonna come.” He was referring to the agony of waiting for the oversized, rusted gears of the entertainment industry to turn, correct?

Today, a post directly from the Disney blog indicates that the House of Mouse has comprehensively retooled The Good Dinosaur to get it in fighting shape before its premiere on Thanksgiving. They provide a little reassurance that there’s nothing to be worried about, this happens to all animated productions, it’s really no big deal. Delays and production snafus gave Inside Out director Pete Docter some trouble, too, so The Good Dinosaur has nothing to feel self-conscious about. Now that the higher-ups at Disney-Pixar have sufficiently tinkered with the film, audiences can expect another smash in the grand tradition of Brave or Cars.

But just as I’ve done in this very article, that blog post buries the lede in the third paragraph, waiting until the last moments to reveal a brand new cast of voice actors replacing the previously announced lineup. The young dino in the lead role will now be voiced by Raymond Ochoa of NBC’s Night Shift (a role originally assigned to Lucas Neff), Jeffrey Wright will take over for John Lithgow, and Marcus Scribner of Black-ish will replace Bill Hader. Both Judy Greer and Neil Patrick Harris have been stricken from the production entirely, and several new characters have also been introduced, to be voiced by Steve Zahn, A.J. Buckley, Anna Paquin, Sam Elliott, and Jack Bright. At least Frances McDormand stuck around; she’s all we can depend on in this hectic and unstable world. Frances McDormand is our rock.