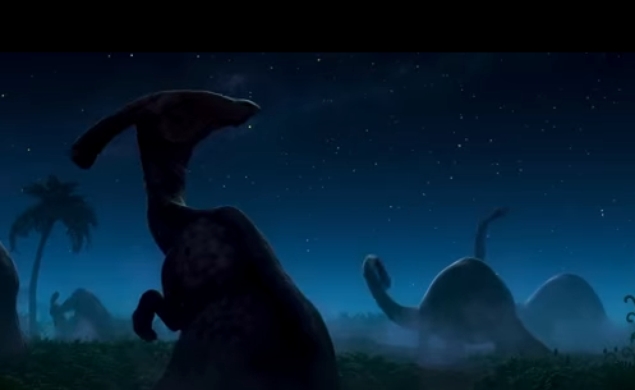 It feels like we’ve been waiting for a first glimpse at Pixar’s The Good Dinosaur since the Triassic era, am I right?! Things have been pretty rocky (one might even say...asteroid-y) for this much-anticipated movie since its inception. Let’s review, because it’s important to understand history so that it doesn’t repeat itself and/or so you can rewrite it and pretend all the bad stuff never happened.

A year before Dinosaur’s planned summer 2014 release, Pixar fired its first director, Bob Peterson, who’d created the original concept—a world where dinosaurs never went extinct—and had been working on the project for years. Pixar President Ed Catmull, pacing back and forth inside a windowless room, explained, “All directors get really deep in their films. Sometimes you just need a different perspective to get the idea out. Sometimes directors… are so deeply embedded in their ideas it actually takes someone else to finish it up. I would go so far as to argue that a lot of live-action films would be better off with that same process.” It would be the the first of many quotes from Pixar President Ed Catmull rife with a quiet sense of panic.

Pixar swiftly replaced Peterson with a “committee” of directors, including Toy Story’s John Lasseter, Toy Story 3’s Lee Unkrich, Brave’s Mark Andrews, and The Good Dinosaur co-director Peter Sohn. Each was charged with their own “section of the movie.” As the popular saying goes, “The more cooks, the better and more cohesive the broth.”

Soon thereafter, Dinosaur’s release date was pushed to November 2015, making 2014 the first year without a Pixar movie since 2005. Pixar President Ed Catmull, raking his fingers through his rapidly thinning hair and his other fingers through an Anxiety Service cat, explained, “Nobody ever remembers the fact that you slipped a film, but they will remember a bad film. Our conclusion was that we were going to give the [dinosaur] film some more time.” This boded horribly for the movie and for dinosaurs in general, who are constantly stereotyped in films as flaky and late to everything.

THEN. In August, John Lithgow told Collider that he was scheduled to re-record his dialogue for Dinosaur. In the first version of the film, he played the “father of a family of dinosaurs whose teenage son goes on a quest, accompanied by a scrappy human named Spot.” Lithgow, taking over the role of Official Good Dinosaur Spokesperson from Pixar President Ed Catmull, who had refused to exit his bathtub for 46 days and was subsisting solely on stale Peeps, told the outlet, “They have now dismantled [The Good Dinosaur] and completely reimagined it, and it is a fantastic new story. So I’m gonna record again on it within the next month. Don’t worry. It’s coming and it’s gonna be better than I ever imagined.” We were worried.

But then! In November, Sohn, who quietly shed his co-directors at some point, told the L.A. Times that the film hadn’t been changed very much from Peterson’s original vision— it would still “take place in a world where an asteroid never hit the Earth and the dinosaurs never went extinct, but instead of a focus on an agrarian society of dinosaurs, there will be a much greater emphasis on the savagery of nature and inclement weather.” A focus on weather instead of actual living things—what could go wrong? Sohn added that the movie’s main character would be “Arlo, a teenage Apatosaurus who mistakenly takes a young boy named Spot as a pet when he assumes he’s a beetle.”

Since then, we’ve heard very little from Pixar President Ed Catmull and his various cohorts, and even less from the actual dinosaurs who once roamed our planet (RIP). But today, the film’s first teaser trailer dropped. And it’s delightful. Behold:

Based on this brief teaser, I’m feeling better about The Good Dinosaur already—it appears to have the stunning beauty and self-aware, lighthearted sense of humor and heart that marks Pixar’s best work. In an interview about the new trailer, Sohn told Yahoo, “Arlo himself is what we would have become, able to articulate and have certain emotions and connection to family. They’ve become us, essentially… I’m trying to treat Spot in a very kind of animalistic way, where he doesn’t speak very much. He’s very feral.” Not unlike Pixar President Ed Catmull, who was last spotted in a lime-green jumpsuit, galloping wildly over some mountains.