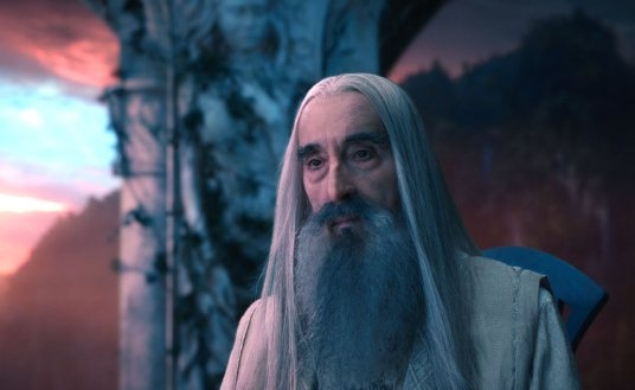 The Telegraph’s Nigel Farndale has republished a 2011 Christopher Lee interview:
“Lee is here at Bafta because his contribution to the film industry is about to be honoured with a Bafta Fellowship. ‘It means a lot to me,’ he says, ‘because it is a pat on the back from the profession. I shall probably have tears on the night of the ceremony. I’m much softer than people think. I don’t present to the world an emotional face. I’m pretty good at self-control, but I am easily moved.’ He adds that when you have been through five years of war you tend to save tears for reality, rather than the make believe of the cinema. ‘That is real horror and blood. When the Second World War finished I was 23 and already I had seen enough horror to last me a lifetime. I’d seen dreadful, dreadful things, without saying a word. So seeing horror depicted on film doesn't affect me much.’ … On the subject of his war record, Lee is like a man wrestling with a secret he longs to tell, metaphorically wincing in order to draw attention to an old war wound, only to say that he doesn’t want to talk about it. He will allude, for example, to his time with the Special Operations Executive, but when you ask him to expand he will look affronted. ‘I was attached to the SAS from time to time but we are forbidden – former, present, or future – to discuss any specific operations.’ Later he raises the subject again and says: ‘Let’s just say I was in Special Forces and leave it at that. People can read in to that what they like.’ ”

The Atlantic’s David Sims looks at the complicated legacy of Batman Begins:
“Ten years ago, the idea of Batman actually scaring people was far-fetched. So when Christopher Nolan’s Batman Begins was released in 2005, one of its biggest achievements was revitalizing the Caped Crusader as a dark icon of intimidation: snarling at Gotham’s underbelly while using fear (a major theme in the movie) to fight crime. Gone was the cartoonish, nipple-suited hero of the 90s; here, instead, was a tortured, flawed champion whose emotional depth grounded his exploits in a more realistic and recognizable universe. It was a revolution. But pop culture's memory is short, and the sight of Ben Affleck growling through his Batsuit in the trailer for Batman vs. Superman earlier this year provoked waves of online derision. Here was the real-world grit and psychological complexity of Nolan’s Batman, only dialed to a thousand. If once Batman had been too silly, now he was too serious. And this is the complicated legacy of Batman Begins: Nolan’s film allowed that superhero franchises could exist with one foot in the real world, and inspired legions of imitators to do the same. Some, like the James Bond franchise rebooted around Daniel Craig, followed that thread beautifully. But others seemed to assume that it was a cynical sense of bleakness that made Batman Begins special. The reality, as it turns out, is much more complex, and much more indebted to Nolan’s unique vision.”

Grantland’s Alex Pappademas looks at how hollywood tinkers with evolution to “grow new Spielbergs in a lab”:
“Whether he earned that sentence or not, we may look back on Trankgate as the end of a brief, weird moment in which Hollywood seemed determined to toss the keys to its shiniest franchise Ferraris to the greenest directors it could find. The last few years have been very good ones for youngish white dudes with superhero/sci-fi affinities and a single critically acclaimed, low-budget movie under their belts. Trank’s first feature, Chronicle — one of the few truly original movies of the current comic-book boom, a creepy found-footage rewiring of teen-superhero archetypes — was released in 2012, a few weeks before Trank turned 28; his Fantastic Four was officially announced that July. That same year also saw the release of The Amazing Spider-Man, directed by Marc Webb, who’d made several music videos and (500) Days of Summer before taking charge of Sony’s $230 million superhero reboot. British writer-director Gareth Edwards graduated from 2010’s Monsters (shot for a reported $500,000 with consumer-grade equipment and a seven-person crew and edited on a laptop) to 2014’s behemoth Godzilla and his own Star Wars entry, next year’s Rogue One. Thirty-eight-year-old Colin Trevorrow’s first film was the $750,000 time-travel comedy Safety Not Guaranteed, a Sundance hit in 2012. His second film, out this week, is Jurassic World.”

The Washington Post’s Alyssa Rosenberg: “Want to understand what it means to be a woman? Look to robots”:
“Ex Machina, a chilly, excellent debut movie from Alex Gardner about an artificial intelligence has crystallized a growing sense in science fiction movies that the machines are rising, and that we’d better prepare ourselves for their ascendance. As my colleague Sonny Bunch noted here several months ago, Ex Machina is of a part with movies like Her, Chappie, and Interstellar, all of which grapple with humans’ relationship to the technology they ostensibly own or control. But it can just as easily be included in another set of movies and music videos: stories about not just how robots and our understanding of humanity, but about robots, men and women. Some critics have noted the role that gender plays in recent explorations of the boundaries of humanness. Daniel Mendelsohn, tracing stories about robots all the way back to the Iliad, notes in the New York Review of Books that ‘because the creatures in these myths are virtually identical to their creators, these narratives raise further questions, of a more profoundly philosophical nature: about creation, about the nature of consciousness, about morality and identity…The similarities between Hesiod’s Pandora and Eve in Genesis indeed raise further questions: not least, about gender and patriarchy, about why the origins of evil are attributed to woman in both cultures.”