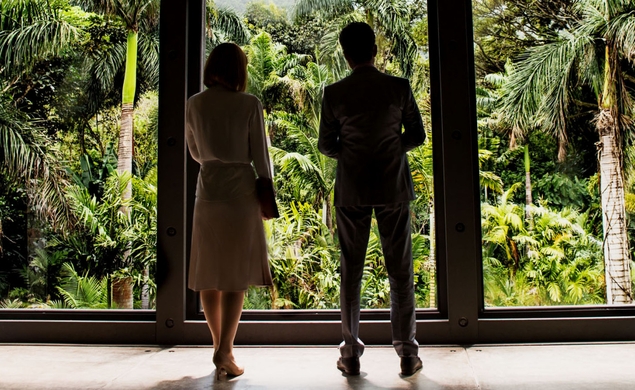 Around the midpoint of Jurassic World, as Chris Pratt’s Owen and Bryce Dallas Howard’s Claire prepare to run off into the dinosaur-infested jungle in pursuit of Claire’s missing nephews, the cocky, flirty Owen points out that she’s poorly dressed for the task at hand. He’s right to call attention to her pristine white skirt-suit and tasteful nude heels: Such garb isn’t suitable for a light jog, much less a life-and-death trek through the Costa Rican jungle. Undeterred and indomitable, Claire swiftly ties her suit jacket in a kicky knot at her midsection (a pointed nod to Laura Dern’s original Jurassic Park getup), gives Owen a smug little look, and they’re on their way. Four-inch heels still firmly on her definitely-not-killing-her-nope-not-at-all feet.

In the lead-up to Jurassic World, some rabble-rousers on the Internet, stymied by the dearth of real information on the film as its premiere approached, homed in on the film’s sexual politics, particularly the apparently “sexist” characterization of Claire, as pointed out by none other than Joss Whedon. Thankfully, Claire, while not quite the fully three-dimensional character with a rich inner life she could be, is a capable-enough and occasionally fun character, a sort of Beta Ripley. She gets to be vulnerable and tough, and gets to save the day in one way or another on multiple occasions. But she does it while wearing high heels.

This may not seem like an important point, because it's not, relatively speaking. (The absurdity of Claire’s footwear in the film has already been mocked, in characteristically charming fashion, by none other than Pratt himself.) It’s a minor flaw in an otherwise solidly realized, if not exactly groundbreaking, character. But it provides a handy object lesson in why wardrobe matters: Wardrobe is a storytelling tool, same as production design and music and even CGI, all of which Jurassic World make smart, ample use of. Wardrobe allows filmmakers to reveal details about characters, or show their development, without drawing attention to it through dialogue. Wielding wardrobe sloppily may not ruin a character, but it’s a missed opportunity for a deeper level of characterization.

In Jurassic World’s early scenes, Claire is presented as a pristine pillar of corporate, artificial otherness within Jurassic World’s perversion of the natural world. She is a micromanaging control-freak in both title—Operations Manager—and personality, and her impractical but impressively tailored snow-white suit and sleek, straightened hair reflect that. (One might think that, as played by an actress who’s 5-foot-8, Claire might not feel she needs the added height and could have simply opted to wear some on-trend flats to work that day, but I digress.) She presents a contrasting figure to Pratt’s ex-military outdoorsman, all rugged, natural fabrics that breathe well yet allow his muscles to bulge in a manner that is pleasing to the eye. As the dominoes begin to fall and Jurassic World teeters on the brink of chaos, Claire’s still attempting damage control, hoping to contain the threat to the park without alerting guests to the imminent danger, and thus tanking the park’s future, and hers. Claire’s turning point as a character is when she, driven by panic and presumably familial bond, makes the decision to go after her sister’s children, at the probable expense of her life, or at the very least her job. (Which, to be fair, is but a distant speck on the horizon at this point in the film.) At that moment, up goes the suit jacket into that sassy little knot, and her hair soon becomes noticeably wavier, the result of all the sweating she’s done while running for her life on multiple occasions. And through it all, the heels stay on.

This is nothing new. Action movies routinely feature female characters kicking ass in many varieties of impractical clothing, high heels included. Comic books and their resultant movies are more notable on the rare occasion they afford a female ass-kicker sensible flats than when they make her fight in thigh-high boots. It’s the sort of thing that rankles once you notice it, but is easy enough to filter out as annoying noise amid an otherwise healthy signal. But by specifically pointing out the impracticality of Claire’s heels, Jurassic World calls attention to this aspect of the character, and its failure to see that observation through is bad storytelling, plain and simple.

Here’s how you fix Claire's footwear problem: At one point in the film, Claire and Owen discover an old ruin of the original Jurassic Park, one stocked with old-but-still-functioning gear and equipment. Perhaps in this ruin, she discovers a sturdy pair of hiking boots stashed in a storage locker, leading to a funny little moment where she holds them up to Owen, smug, and puts them on, tossing her heels aside. (Hell, let the camera linger in on the mud-and-blood-splattered pumps for a second if you want to get cute with it.) Or, failing that, she breaks her heel at some point, then, bent but not broken, leans down, snaps the heel off the other one, and keeps going. Or something else! I don’t get paid to come up with this stuff. There are countless of much better, more imaginative ways to hurdle this minor obstacle in the character’s wardrobe. Many other films and television shows have found smart, subtle ways to do it. Again, this is nothing new.

Claire’s refusal to rid herself of impractical footwear that could easily get her killed in this horrifying scenario doesn’t make sense from a realistic standpoint or a storytelling standpoint. I have seen drag queens do things you can’t imagine while wearing 6-inch stilettos, but high heels and moist jungle soil do not mix, and no matter how agile a lady and how strong her calf muscles, running at top speed in heels over irregular terrain will eventually result in a turned ankle (and then, presumably, death). And even if we are to accept that Claire is descended from the same genetic line as Wonder Woman and can perform unimaginable feats while wearing heels, that doesn’t mesh with Jurassic World’s version of Claire’s character development, where she casts aside the sartorial symbols of her servitude to corporate greed and confronts the natural world on its own terms. Hell, this wardrobe decision doesn’t seem to even make sense to the actor who plays Claire: When asked about her character’s footwear in Jurassic World, the best explanation Bryce Dallas Howard—who was initially “kind of against the idea of wearing them”—could come up with seems to be that wearing heels was preferable to running around barefoot, not even acknowledging the third, sane option: to wear literally any other kind of shoe. (My suggestion: these.)

It’s one thing to completely ignore an aspect of your story that doesn’t make sense in the real world; streamlining is necessary in screenwriting, and not every little detail can go remarked upon. But it’s another matter to introduce a problem with your character’s wardrobe and then neglect to satisfactorily solve it, as Jurassic World does. The film’s script utilizes Claire’s wardrobe to tell a part of its story—and to make a joke—but it doesn’t go all the way with it. In this one tiny but maddening detail, Jurassic World sets itself up to fail. Just like a woman setting off into the jungle in a pair of tasteful but deadly nude platform pumps.