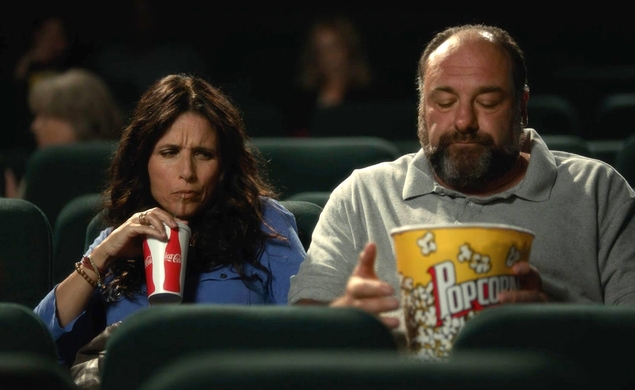 All of Nicole Holofcener’s movies—Lovely & Amazing, Walking And Talking, Friends With Money, Please Give—feel real and lived-in while simultaneously (and lovingly) sending up the world they’re holding a mirror to. They’re character studies rife with dialogue that’s quotidian but clever, as well as characters you recognize, for better or worse, as slightly larger-than-life versions of those that populate your own universe. Enough Said happily continues that tradition, introducing individuals who are deeply flawed and at times cruel to one another, but also witty, insightful, and vulnerable in a way that demonstrates that Holofcener’s not only in on the joke, but rewriting it with an extra layer of warmth. Julia Louis-Dreyfus stars as Eva, a divorced massage therapist who tentatively starts dating the good-hearted but manchild-y Albert (James Gandolfini), who, unbeknownst to Eva, is the ex-husband of her newest client and friend, the enigmatic poet Marianne (Catherine Keener). In the hands of another director, this plot might feel contrived or silly, but instead, it serves as a springboard for a pair of deeply funny, occasionally painful, and always fantastic performances from Gandolfini and Louis-Dreyfus. Enough Said is a bittersweet film, partly due to the fact that it’s one of Gandolfini’s last, partly because it’s full of empathy and difficult truths, good humor and heartbreak. But it’s also something of a social satire that peers down at its characters from a slight remove, a comedy of errors that affectionately pokes fun at the innate humor of imperfect, jaded people (i.e., all people) tormenting and trying to connect with one another in equal measure. Enough Said airs at 4:15 p.m. Eastern on HBO Signature.