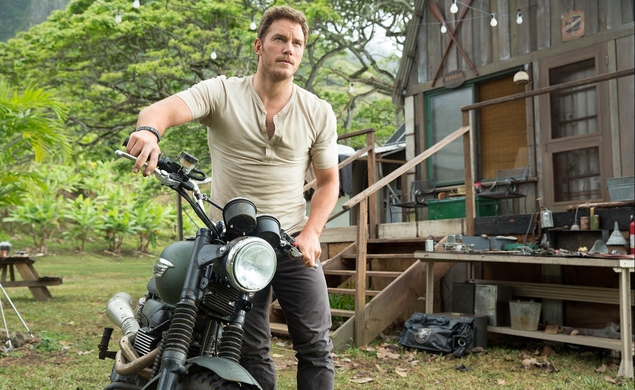 Movie Mezzanine’s  Adam W. Hofbauer writes about Chris Pratt as the next incarnation of the “cool girl”:
“Let us recall the Pratt ascendency: long-time working actor, juggling cable-TV bit parts with background film roles; lucks into megastar wife, then into multiple franchises; formerly doughy, now sculpted, yet having lost none of the ‘Who me?’ magnetism of his dad-bod inner self, his mouth hanging forever half-cocked in an asymmetrical smile that seems to originate from the sunlit bathhouse of his own glowing soul. Unlike the anonymous physical perfection of franchise placeholders like Jai Courtney and Sam Worthington, the appeal of Pratt’s beauty is that it feels earned, as if that doughy guy who loves Cheetos is still lurking inside the now-sculpted screen idol. And it all seems so accidental, as if fame of such top-tier magnitude were as much a blunder as an accidental double entendre about fellatio on The Graham Norton Show. The fallacy of these gaffes is no secret. As Pratt told Esquire last year, ‘The best stuff that you hear me say will be stuff that I thought of over the past three years. The best acting I did was pretending that it was improv and sneaking it in like I just stumbled on it.’ This is the key to the Pratt persona: his ability to make even his most practiced bits seem spontaneous. Pratt isn’t some caveman-browed jock of a 1980s teen movie enforcing heteronormativity through intimidation. If we ran into him on the street, he might not want to hang out with us, but he’d totally interact with us in some priceless way that confirmed our suspicion that he was the rad dude previously advertised.”

The New York Times’ A.O. Scott thinks we’re in the midst of a humor crisis:
“And this is where the humor crisis lives: in thorny, almost philosophical questions of intention, context and social power. It’s easy enough to formulate a distinction between the redemptive satire that aims upward, toward the seats of privilege and authority, versus the bullying kind that picks on the powerless. It can be quite a bit harder to figure out which way is up, and to make a clear distinction between solidarity and aggression. It can be virtually impossible to make a joke about racism that isn’t also a racist joke.”

Grantland’s James Hughes visits Kentucky’s fifth annual Harry Dean Stanton Festival:
“In 1971, Stanton sauntered into one of the quintessential American road movies, Monte Hellman’s Two-Lane Blacktop, which opened the three-day festival on May 29. The screening was presented drive-in style on the grounds of a shuttered bourbon distillery in Lexington, free of charge. When Stanton finally made his entrance onscreen, as an obliging but possibly lecherous hitchhiker sharing a ride with Warren Oates, a fellow Kentuckian, ripples of applause broke out across the parking lot. The wait had been worth it. Since well before dusk, cars had been lining up and getting situated. Among them was a ’55 Chevy parked in a prime spot up front — a near facsimile of the car James Taylor and Dennis Wilson labor over in the film…While Two-Lane has achieved cult status and has been screened countless times around the world, few presentations can compare to a view from the back of a pickup truck over beers and bourbon with gracious Kentucky hosts. And while most attendees conversed freely during the show, there was a noticeable hush during the iconic shot at the climax, when the celluloid melts mid-frame. It’s an effect that still resonates, even when projected digitally on an inflatable screen.”

The Hollywood Reporter’s Graeme McMillan looks at the many and troublesome adaptations of Philip K. Dick:
“We Can Remember It For You Wholesale (1966). What It Was: A short story about an unassuming worker who, unable to afford a trip to Mars, buys a fake memory of such a trip instead — only to discover before he's received it that he actually did visit the planet as a government assassin. In a final twist to the story, the false memory the authorities choose to replace his impulse to visit is also revealed to be true, and he saved the world from an alien invasion when he was a child. What It Became: This is the story that formed the basis of Total Recall, which diverts pretty drastically from the original both in terms of plot and by pretending that Arnold could ever pass for an unassuming worker drone.”