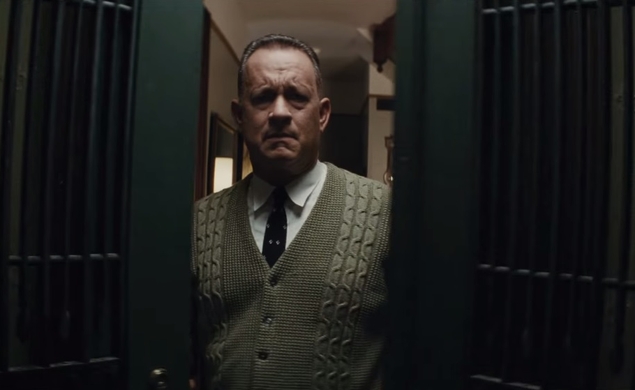 For Bridge Of Spies (a silly title that sounds like it was ripped right from the cover of a forgotten Tom Clancy paperback), Steven Spielberg and Tom Hanks’ fourth film together, the duo are, once more, going into that deep, dark abyss known as The Past, dissecting questions that remain relevant. (They previously delved into the 1950s/’60s with the great Catch Me If You Can, and World War II with Saving Private Ryan.) With Bridge Of Spies, those questions seem concerned with patriotism, paranoia, and the so-called “greater good.” Hanks is insurance lawyer James Donovan, an upstanding, Constitution-abiding citizen whose country calls upon him to help negotiate the exchange of a Russian spy for a captured American pilot whose cranium contains Class Five secrets. (I assume Class Five is very high.)

The American people greet Donovan’s humanistic mission—“everyone deserves defense… every person matters,” he tells us—with hostility, throwing things, shouting slurs, shooting up his house Godfather Part II-style. Hanks says, in at least three variations, that the Cold War could end the world, and the next mistake could be our last, their last, the last. Cut to credits. The trailer for Bridge of Spies packs a ton of footage and a large enmeshment of dialogue, but doesn’t divulge that much about the plot proper, which is fine; being based on a true story, the ending won’t exactly be a surprise for anyone currently living and breathing in 2015. (Spoiler: Russia doesn’t get the secret information and destroy America.)

While any new period piece from Spielberg is inherently gorgonizing, especially when Hanks has the lead, Bridge Of Spies has been hyped and highly anticipated for a couple of years now because the Coen Brothers penned the screenplay, reworking Matt Charman’s initial draft. Pairing Joel and Ethan Coen, two of the most important auteurs (and the only two-headed auteur) of the last two decades, with Steven Spielberg, the guy who engendered the modern blockbuster, is like divine intervention, or some once-in-a-lifetime alignment of certain planets and space particles.

This trailer teems with paranoia. (That brief glimpse of Donovan contemplating taking a drink from an enigmatic Man of Power harkens back to Hitchcock.) Though a vague, unsettling feeling of jingoism envelops the whole thing like a lens filter, Spielberg’s and the Coens’ bodies of work lead one to believe the patriotic, America-is-Awesome stuff in the three-minute trailer is a ruse, or setting up Donovan’s disillusionment, or something else sneaky. Also worth mentioning: Hanks’ careful, clearly practiced and perfected enunciation and flow feel forced, or fake—like we’re already being set up. Either way, this is quickly becoming one of our most highly anticipated films of 2015.