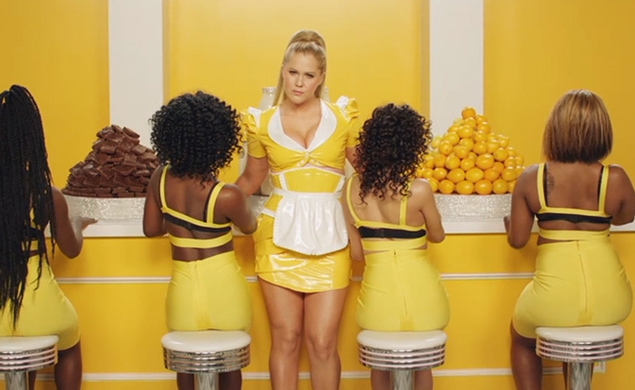 Amy Schumer is killing it. That’s not my own observation, though I fully agree with it; it’s a direct quote from Tina Fey, who handed the badass feminist comedian a Peabody Award this weekend, then promptly smooched her on the lips. As anyone would. “In a culture where young female entertainers are expected to be sexy without being too sexual,” said Fey before she took Schumer into her arms, “Amy’s honesty is making everyone furious.”

That honesty is also making Hollywood—the same town Schumer spends most of her time brilliantly skewering on her smash Comedy Central series Inside Amy Schumer—fall madly in love with her. In the past few weeks alone, Schumer’s been cast in an untitled Paul Feig comedy; been courted to appear in Plus One, an April Prosser-penned comedy co-starring Jessica Chastain, which, oh my God, what is this life; and has embarked on a national tour (see y’all there) to promote her forthcoming feature-film debut, the Judd Apatow-directed Trainwreck.  As of today, the Tracking Board reports that Schumer is also being offered the title role in Ginny, an “offbeat con-artist comedy” with Jason Sudeikis.

There’s nothing more fucking fantastic than watching a woman whose arms register as legs in Hollywood completely dominate Hollywood.

Peyton Reed of Ant-Man, Down With Love, and Bring It On fame is attached to direct Ginny, which was written by Andrew Weinberg (previously a writer for Conan O’Brien). Lorne Michaels is set to produce alongside Andrew Singer via their Broadway Video, Inc. production company. Welp, that’s a lot of dudes in charge of a movie about a dumb rich lady, which scares me a little. But again, let us return to our mantra and trust that Amy will bring some of that rage-inducing honesty to this testosterone-drenched set.