The Rock puts a fault line right through Pitch Perfect 2 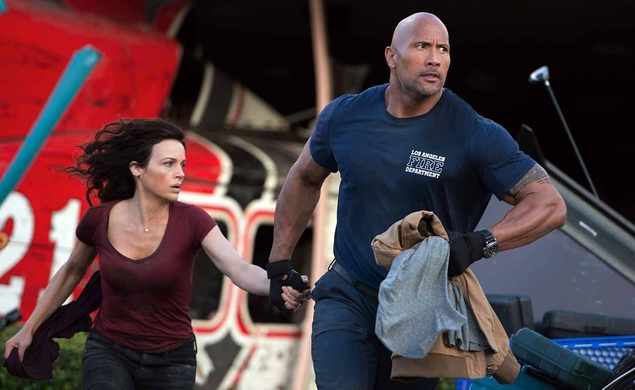 Mamas, don’t let your babies grow up to be movie titles that so wonderfully lend themselves to box-office punning. This weekend’s big winner, natural disaster actioner San Andreas, has the gags on lock, and twofold really, thanks both to its subject matter (earthquakes) and its star (The Rock). Nothing spices up a box-office report like jokes about destruction, fault lines, shaking, rocking, rolling, probably rocking again (this time: Rocking), more destruction, and falling buildings. Has someone out there made a snap about The Rock hip-checking a large building on to the Pitch Perfect 2 ladies? Probably, if not, definitely by next week.

San Andreas rocked (Rocked) the box-office this weekend, pulling in $53.2 in its debut. That’s the seventh biggest disaster movie opening ever, behind such big guns as Godzilla (2014), Gravity, and The Day After Tomorrow (which I had zero recollection of being such a big hit—did you know that film made over half a billion dollars at the global box-office?). It’s also the biggest opening for a Rock-led movie that’s not part of the Fast And Furious franchise (though The Mummy Returns did better, that one doesn’t totally qualify as a Rock-starring picture, at least per Box Office Mojo accounts, which goes out of its way to remind us that the Rock has a “minor” role in the film, diss). It’s also the biggest opening for director Brad Peyton, with this opening already surpassing the full domestic take of his 2010 feature Cats & Dogs: The Revenge Of Kitty Galore.

Pitch Perfect 2 held on to second place for the second week in a row, earning a respectable $14.38 million, enough to push its domestic take scarily close to the $150 million mark (it’s currently hovering around $147 million, so that benchmark will be surpassed this week). With international ticketing taken into account, the film has made over $228 million, nearly twice the first film’s total global take from back in 2012.

Tomorrowland plummeted from first place to third, dropping 58.2 percent from last week’s debut. The film pulled in just $13.8 million, though with foreign sales, the Brad Bird film has made over $133 million total. Keep dreaming, folks!

Cameron Crowe’s much-maligned Aloha opened in sixth place with an estimated $10 million take. Somewhat surprisingly, it’s still a better opening than 2011’s We Bought A Zoo, which opened under $9.4 million. Despite comparisons to Crowe’s other notorious misfire, Elizabethtown (which I still like a lot, so help me, God), the film made less than that feature, which opened at $10.6 million in 2005. Still, mostly bad word of mouth and series of brutal reviews will likely leave Aloha saying “aloha” before long (in this case, “aloha” means goodbye).

Elsewhere, the Safdie brothers’ latest, the Essential Viewing-certified Heaven Knows What, began its limited run with just two theaters. The film made $15,000 total, enough to give it a very nice per-theater average of $7,500 (the second best of the week, thanks to San Andreas, which also won that battle, behemoth that it is).

This week sees the release of one heck of a mixed bag, including Entourage, Spy, and Insidious Chapter 3, along with a bevy of compelling indie features, especially Love & Mercy, Hungry Hearts, and Testament Of Youth.