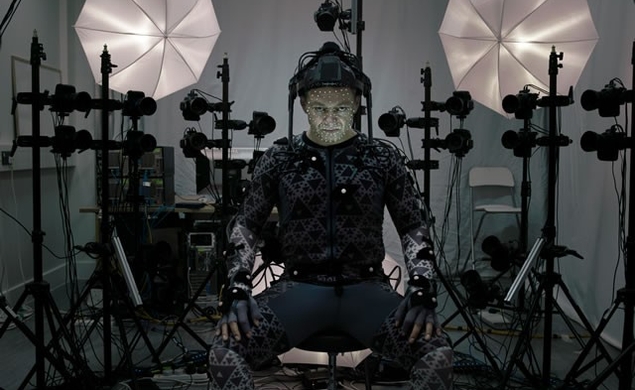 Star Wars Thing Of The Day: Please enjoy your first look at Andy Serkis’ character
Today brought a first glimpse (above) at Andy Serkis’ character in Star Wars: The Force Awakens, an upcoming movie about how, this summer, every celebrity will be forced to pick a side in the years-long feud between Harvey Weinstein and Harvey Keitel over who is the Scariest Harvey, then fight each other to the death. Serkis will play Supreme Leader Snoke, the hybrid son of a human and a sleeve of Necco Candy Buttons.

Electric Vibes Of The Day: Benedict Cumberbatch, who may play Thomas Edison
Benedict Cumberbatch is in talks to play Thomas Edison in The Weinstein Company’s (don’t hurt me, Keitel, I’m just the messenger) The Current War, a movie that will, once and for all, explain electricity. Written by The Giver’s Michael Mitnick, the film “chronicles the true story behind the direct/alternate current debate and follows the intense rivalry between inventors Thomas Edison and George Westinghouse as they battled to be the first to commercially implement a practical system of electricity.” As a staunch alternating-current supporter myself—not really one to go with the flow, if you know what I mean!—I’m crackling with anticipation. Who will win electricity??

Unintended Entourage Of The Day: Jerry Ferrara, Wendy Molyneux Drake, and Eric Stonestreet
Bob’s Burgers writer Wendy Molyneux Drake really doesn’t want to see the Entourage movie. So she’s asking people, via GoFundMe, to pay for her to see the movie—but, guys, it’s for charity! She wants to raise $10,000 for CureSearch, an org that supports kids with cancer. It’s kind of confusing, but just go with it. And in a stunning publicity move worthy of Ari Gold and/or Harvey Weinstein, Entourage star Jerry Ferrara has just donated $1,500 to Wendy’s campaign, subsequently reaching a level called the “Turtle 2” that rewards the donator with a ticket to see the Entourage movie with Wendy herself. As of this printing, Eric Stonestreet has done the same. What a world! It is my sincere hope that the three of them see this film together and walk out holding hands and smooching.

Unceremonious Exit Of The Day: Henry Cavill is no longer starring in Stratton
Henry Cavill has pulled out of the leading role in Special Forces thriller Stratton less than a week before shooting was scheduled to start, as he, a strapping young specimen, was asked to report for duty for the War Of The Harveys. Weirdly, Cavill was pretty pumped about Stratton back in February, saying “[director] Simon West is a perfect match for this movie wit his ability to marry storytelling and action, both of which are essential to do this project justice! [again, exclamation point his]” But more recently, he’d expressed a “different vision of what the film should be” and “wanted to delay production until September [when the Great War is slated to wrap up] and shoot a different story and script.” Based on the first of a series of novels by Duncan Falconer, Stratton was supposed to follow Cavill as he and his team risked “life, limb and national security to track down an international terrorist cell.” Now it will follow nobody doing nothing.

Not That Keanu Of The Day: The other Keanu, starring Key & Peele and Will Forte
Will Forte will join Keegan-Michael Key and Jordan Peele in Keanu, which has nothing to do with Keanu Reeves, whom I heretofore believed to hold the trademark to the name Keanu. Nay, Keanu, directed by Peter Atencio, follows two friends (Key and Peele) “who decide to act like gangster drug-dealers in order to retrieve a stolen kitten.” Ah, yes, the old “fuck-bitches-get-kittens” scheme. Forte will play a “low-level pot dealer obsessed with black culture although Peele’s character is the only black person he knows.” Method Man has already signed on to play a “murderous drug lord,” while Gabrielle Union is playing Key’s wife and/or the stolen kitten, depending on budget.