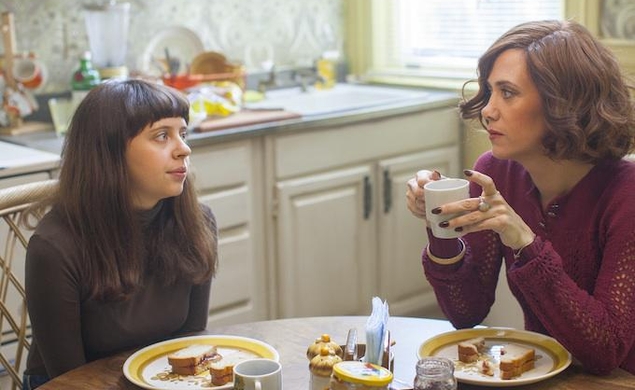 Just for funsies, let’s list some of the things that we ardent moviegoers rarely see: 1) Movies about young women. 2) Movies about women—of any age—unapologetically exploring their sexual identities. 3) Movies with female writers. 4) Movies with female directors. But fear not, dear readers: The Diary Of A Teenage Girl possesses all four of these highly exotic qualities, plus enough controversial plot points—affairs with older men, psychedelic-drug-dabbling, general adolescent debauchery (in other words, Haight-Ashbury in the 1970s)—to keep Fox News flush with reactionary content for several decades.

The film, which first-time writer-director Marielle Heller adapted from Phoebe Gloeckner’s semi-autobiographical 2002 graphic novel, premiered at Sundance to many an effusive critic and won the Grand Prix of Generation 14plus section at Berlin. Heller first adapted Gloeckner’s novel as an off-Broadway play in 2010, which she also starred in; for the feature-film version, Heller tapped buzzed-about British newcomer Bel Powley to play protagonist Minnie Goetze, an adolescent girl plunging headfirst into all the sex, drugs, and hacky-sacks that 1970s San Francisco had to offer. Here’s the official synopsis:

“Like most teenage girls, Minnie Goetze (Bel Powley) is longing for love, acceptance and a sense of purpose in the world. Minnie begins a complex love affair with her mother’s (Kristen Wiig) boyfriend, ‘the handsomest man in the world,’ Monroe Rutherford (Alexander Skarsgård). What follows is a sharp, funny and provocative account of one girl’s sexual and artistic awakening, without judgment.”

As brief plot synopses go, “young girl begins complex love affair with mom’s boyfriend” doesn’t exactly radiate female empowerment. Actually, upon first reading, it struck fear deep into the feminist part of my soul, where Gloria Steinem and Meryl Streep reside together in a solar-powered co-op. But reviews out of Sundance, like that of The Hollywood Reporter’s Todd McCarthy, confirm the “funny” and “without judgment” portions of that summary, which the film’s success would seem to hinge upon: “It is amply clear that Heller (and Gloeckner before her) is not interested in moralizing or assigning blame but, rather, in closely examining the development of a girl into a woman, of discovering one’s identity and becoming confident in asserting it.”

The first trailer seems to reflect that singularly progressive POV, with a dash of goofiness and whimsy for good measure:

At Sundance, our own Noel Murray was impressed by Powley’s performance, but less so by the movie itself. “The Diary Of A Teenage Girl suffers some from imposing a plot arc onto material that works better as a series of anecdotes about a libertine youth. Minnie’s inability to stop pursuing a relationship with her first lover—her mother’s boyfriend Monroe, played by Alexander Skarsgard—becomes increasingly maddening, and takes time away from the scenes of Minnie maturing through a dangerous process of trial and error,” he wrote. “Still, Powell brings a combination of carnality and wide-eyed innocence to a character who treats sex, drugs, and even comics as pass-cards into the secret club of adults.”

Personally, this trailer’s giving me a “Harriet-The-Spy-meets-An-Education-meets-What-If” vibe; Powley has a bit of a Zoe-Kazan thing going on (it’s in the wide, expressive eyes, and the self-aware intelligence, I think), and those intermittent cartoon interludes are reminiscent of the too-cute-by-half sketch animations fluttering about in Michael Dowse’s feature. As a fan of all three of these works—and as a one-time teenage girl who kept an extremely detailed diary of all of her teenage-girl exploits (hi, Mom!)—I’m looking forward to this one.