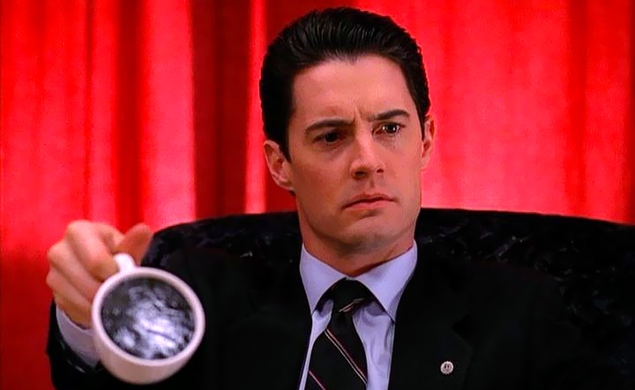 The Internet promptly lost its shit, pouring scalding coffee all over our keyboards and shoving household objects underneath our fingernails in celebration. But little did we know that this was merely Phase One—the “hype” phase—of Lynch’s brilliant, twisted, self-mounted publicity campaign. Lynch’s objectives, in my very professional estimation, were four-fold: 1) reboot Twin Peaks 2) for a fuckton of money 3) with zero interference from other human beings and 4) present it to a foaming-at-the-mouth public, who were so mad with lust for the series that they’d accept it in any form or quantity.

Phase Two began in April of this year, when rumors began to fly that Showtime had cancelled the series. Lynch, took to Twitter again to explain, striking a tone that fell somewhere between sadness and Kardashian-level shade.

Dear Twitter Friends, Showtime did not pull the plug on Twin Peaks.

After 1 year and 4 months of negotiations, I left because not enough money was offered to do the script the way I felt it needed to be done.

This weekend I started to call actors to let them know I would not be directing. Twin Peaks may still be very much alive at Showtime.

I love the world of Twin Peaks and wish things could have worked out differently.

This was the first unadulterated glimpse we got at David Lynch, diabolical marketing genius. This was some season-one Ben-Horne shit: Not only was Lynch snatching the hot cup of Twin Peaks hype he’d just brewed us straight from our hands, he was also putting Showtime on blast for being cheap, dream-shattering scoundrels—simultaneously stoking the flames of our now-blazing desire for the series and likely upping his own salary and negotiating power.

Just as Lynch knew it would, the Internet lost its mind again, this time determined to boycott whatever bastardized version of Twin Peaks might make it to the small screen and also burn down Showtime’s sawmill to buy up its land. Even Twin Peaks’ cast got in on the action, filming a video in which they all pleaded with Lynch to return.

Showtime, scrambling to pick up whatever smoldering pieces of dignity it had left, put out a statement shortly thereafter: “We were saddened to read David Lynch’s statement today since we believed we were working towards solutions with David and his reps on the few remaining deal points. Showtime also loves the world of Twin Peaks and we continue to hold out hope that we can bring it back in all its glory with both of its extraordinary creators, David Lynch and Mark Frost, at its helm.” But the damage had been wrought. David Lynch, both the Ari Gold and the Vinny Chase of his own life, had beaten the Showtime publicists at their own game.

Years passed. (David Lynch Years, which are roughly one month for the rest of us.) Strategically (as always), Lynch stayed relatively silent on social media, tweeting mystically about Dr. Oz and Allen Ginsberg—both, of course, experts in mindfuckery in their own right. We inhabitors of the Internet had all agreed that a Lynch-less Twin Peaks was going to be some bullshit, but we’d probably check it out anyway, because what else were we gonna do in 2016? Watch season two of The Astronaut Wives Club?

Dear Twitter Friends, the rumors are not what they seem ..... It is !!! Happening again. #TwinPeaks returns on @SHO_Network

Phase Three was complete. Showtime President David Nevins, trudging behind Lynch, carrying his bird-watching gear and weeping softly, confirmed the announcement: “This damn fine cup of coffee from Mark and David tastes more delicious than ever. Totally worth the extra brewing time and the cup is even bigger than we expected. David will direct the whole thing which will total more than the originally announced nine hours. Preproduction starts now!!”

Those are the double exclamation points of a broken man, a man who has ceded all power, a man who will spend the rest of his days re-enacting the Civil War. And while I’d personally like to feel unsullied joy about the news of Lynch’s return, I’m trepidatious. We’ve seen what David Lynch, depraved digital-marketing virtuoso, is capable of. Is this truly the final phase of Lynch’s staggering Twin Peaks blitz? Or are the owls not what they seem?