Our next Movie Of The Week: Glengarry Glen Ross 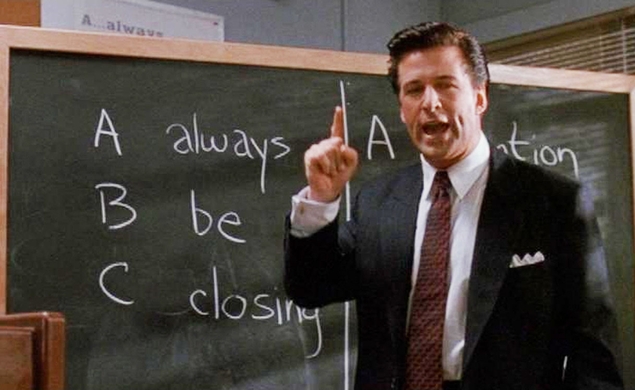 As a writer, David Mamet loves him some speeches. But his language is virtually never flowery or elaborate. He’s all about punch and patterns, repetition and reuse (especially of profanity, which he often uses like common punctuation), and thoughts forcefully delivered. Sometimes those thoughts come in jackhammer staccato, and sometimes in lulling, hypnotic diatribes. Both approaches tend to make his dialogue memorable, but it’s still rarely as quotable as it is in his 1983 Pulitzer Prize-winning play, Glengarry Glen Ross. The 1992 film version, directed by James Foley, is even more quotable, thanks to the added scenes—particularly the iconic one featuring Alec Baldwin as a hard-hitting, contemptuous sales-company rep whose every word belongs on the Most Memorable Lines In Film wall.

But the major reason to see our next Movie Of The Week is the murderers’ row cast speaking those memorable lines: Jack Lemmon, Al Pacino, Alan Arkin, Ed Harris, Kevin Spacey, and Jonathan Pryce, along with a young, taut Baldwin in that one-shot-and-out scene. Playing weary salesmen trapped in dead-end jobs in a competitive, cynical office, Lemmon, Pacino, Arkin, and Harris each get their turns to shine. They’re a tight ensemble, navigating ugly professional dominance games and trying to maintain a sense of manhood in an industry and a company that feels as interested in emasculating them as in turning a profit—because unmanning them is supposedly the best way to push them into trying harder to prove themselves.

Glengarry Glen Ross is simple filmmaking, but it’s a fantastic acting and writing showcase, which gives us plenty of things to talk about in a Keynote on the unusual and possibly unreplicable filmmaking lessons Foley’s film conveys. And in addition to the usual Forum conversation digging closer into the details, we’ll have a Thursday essay where Tim Grierson posits this as the specific movie where Kevin Spacey, actor became Kevin Spacey, Star Personality. Now remember, A-B-C: Always Be Considering this film a masterpiece that we can’t wait to talk about. Do I have your attention?