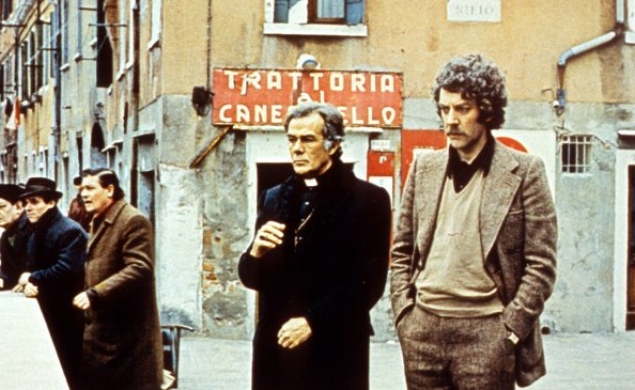 Nicolas Roeg’s Don’t Look Now would make my list of Top Five Films That Should Never Be Remade, Ever. What’s the point? The film’s pretty much perfect, and has already influenced cinema (both horror and not) pretty extensively, from Casino Royale to American Horror Story, from In Bruges to The Brood. Pseudo-retired auteur Steven Soderbergh borrowed Roeg's innovative editing techniques liberally for the sex scene in Out Of Sight, and has been pretty open about his appreciation for the film. It also received a very sexy Blu-ray release courtesy of Criterion earlier this year, which only reinforces its cultural importance.

At once lucid and elusive, the epochal film taps into the internal sorrow of death and loss that most of its contemporaries jettison in favor of Exorcist-derived shocks. It remains a touchstone of British film, ’70s film, the horror genre, and the course of human events. David Cronenberg, a guy who knows a thing or two about scaring (and scarring) people, even called Don’t Look Now the scariest film he’s ever seen.

So what’s left to do to a film that’s perfect, has recently been remastered and rereleased, and has become a cinematic milestone? Remake it, of course. I wonder if the sisters saw this coming.

The Hollywood Reporter confirms that Andrew Rona and Alex Heineman, who are responsible for the Liam Neeson vehicle Non-Stop and the still-in-development Escape From New York remake, are now producing a remake of Roeg’s classic film for StudioCanal, which I’d like to imagine is only taking on this project as some sort of silly play on its name. No word yet on the creative team.

Don’t Look Now’s elliptical narrative concerns a couple (Donald Sutherland and Julie Christie) mourning the death of their young daughter, who drowns in the film’s first moments. In one of cinema’s great opening scenes, Sutherland inspects photos of an old cathedral he’s restoring while the children—one boy, one girl—play outside. It begins tranquilly: a placid backyard, the girl’s shimmering red reflection dancing along the surface of a still pond. Then, with the abruptness of a match struck in a darkened room, the scene veers sharply into tragedy. Roeg quickly establishes the motifs, the leitmotifs, and the aesthetics with which he'll play for the rest of the film, and which he'll use to conjure horrors, akin to a sorcerer tossing ingredients into a bubbling cauldron. Using the arroyo alleys and myriad canals of Venice, Roeg turns the picturesque city into a labyrinth of ruin and decay.

The film draws much of its immense power from the keen, often disorienting editing, which jumbles past and future events. Editor Graeme Clifford and Roeg cut film like a stone, which they then shatter it into a bunch of gleaming shards that are rearranged and reassembled into a fragmentary whole. That they did all of this on film, without the aid of Final Cut, still baffles my movie-loving mind. There’s nothing that anyone can do to improve upon the film, and the notion of updating it to the Twitter age seems pointless. It’s a film set firmly in 1973 that simultaneously exists in a timeless realm.

But it (sadly) makes sense that a film concerned with the Sisyphean futility of life should be reworked and remade 40 years later to the chagrin of its fans. While I try to be optimistic, the cynic inside me might say that unique, original horror films are dead. Dead dead dead dead dead dead!