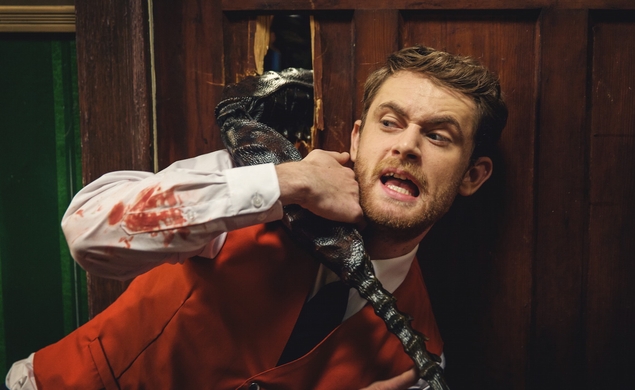 The Tribeca Film Festival seemed shorter on midnight-madness horror movies this year than in previous years, but one standout was Stung, the feature debut of German SFX artist Benni Diez. Stung is a silly horror film about giant mutant killer wasps, but at times, it’s also a surprisingly sincere romance. Julia (Jessica Cook) is the anxious new owner of a tiny catering firm; Paul (Matt O’Leary), her dutiful but slacker-y only employee, has a crush on her that she doesn’t reciprocate. Then, at Julia’s first real gig, chemically mutated wasps start transforming the party guests into gigantic, bloodthirsty monsters. Which doesn’t stop the film from periodically dialing back to check in on Matt and Julia’s budding romance, or lack thereof. Aliens and Millennium’s Lance Henriksen co-stars as the town’s grumpy, practical veteran mayor, with Tigerland’s Clifton Collins, Jr. as Julia’s creepy client. Stung has been picked up by IFC, and is currently awaiting a U.S. release date. It made its world première at the Tribeca Film Festival on Friday, April 17.

The Dissolve: Your background is in CGI and digital effects. Are your giant wasps primarily CGI? At times they seem more like practical effects, but they’re integrated well enough that it’s hard to tell.

Benni Diez: It’s very, very mixed, and I can’t even say what percentage is practical and what is CG, because sometimes it’s combined in one shot. We tried to do as much real as possible, and then we ended up with more CG than planned, because sometimes we couldn’t shoot stuff on the spot. We had so little time on set, so we had to fill in the gaps that we just couldn’t do in the real shoot. We tried to get a good balance. You always have to start out with something real, even if it’s just one rubber leg, and you expand on that. What we did a lot was actually practical bodies of the wasps, and the wings were CG. There were a few dozen shots of that. Most of the time, if it’s close-up, it’s real. If it’s farther away, it’s starting to get more CG, because you can’t wire-control the bodies any more, because then you would see the puppeteer.

The Dissolve: How did Lance Henriksen get involved?

Diez: We asked him! We asked his management and agency. That was a crazy day. It started with [Stung screenwriter Adam Aresty] and me being fans of Aliens. This whole film is an homage to films like that. We approached a few different actors for that role, and at one point, I said to the producers, “Guys, just for the fun of it, can we ask Lance Henriksen? He’s not going to do it, but let’s just ask him.” And then I was out with a few friends in Cologne, Germany, having a few beers, and my phone rang, and my producing partner [Benjamin Munz] said, “Hey Benni, it’s Ben, Lance is doing the movie.” And I was like, “What?!” Imagine being out with your friends at night and getting this kind of phone call.

The Dissolve: His character and Clifton Collins Jr.’s character are so specific. Once you had those actors cast, did those characters evolve for them?

Diez: Oh, very much so. With Clifton, we had someone else cast in that role. And then Clifton came on the project shortly before the production. That informed his role a lot. It was really awesome to get him in there, because before that, the role was a bit more basic, really just the weird guy who’s kind of a villain. He’s such a character actor, and he has such a nice, natural phrasing. He did so much with the role. And having Adam on the set to work on the script, we always had the opportunity to tweak dialogue, to tweak little details in the scenes. I talked a lot with Cliff even on the day before the shoot. Five minutes before the shoot, he blasted me with questions about the character, and we fleshed out even more details. It was really an awesome experience for me as an inexperienced director working with such high-grade character actors.

The Dissolve: Your screenwriter said at the Q&A that the film was inspired by a period when his life was shut down by a wasp attack. How did you know him? How did you come to this script?

Diez: My manager sent me the script a few years ago, and I loved it so much that I said, “Get me that guy on the phone.” And then I talked to Adam, and we totally hit it off right away. We had the same tastes in movies, and we had the same sense of humor. I knew if I was ever going to do a feature film, this was going to be my first, because it’s just perfect. It has every element I love about drama.  It has the scope where I would dare start really directing actors. Because it’s not an ensemble with a dozen characters that have a lot of nuance, it’s very compact. I had to do this movie.

The Dissolve: You’ve cited some classic drama-horror influences, like Jaws and Aliens. But this also feels like a 1950s creature feature, and the humor is very much up to the moment in terms of camp. Are you also a fan of horror films on the further ends of the spectrum?

Diez: Oh absolutely. Formicula [the German title of 1954’s giant-ant movie Them!], for example, and other really old black-and-white movies were inspiring and awesome. They didn’t give a fuck about, “Do those effects work photo-realistically?” It came down to, “What’s the psychology behind a menacing monster attack? What are the middle layers between? What does this do to people?” And the modern point of view came into play with us asking, “How can we try to put an indie-movie sensibility into this classic monster drama, and create characters that you believe, because they’re very down to earth?” Stung isn’t really mumblecore, but it’s borderline sometimes. We put those kind of characters into monster situations and then just see what happens. And hopefully, people get emotionally involved because of it.

The Dissolve: Stung feature a lot of downtime for a horror movie. There’s so much emphasis on how put-down Paul feels by Julia, and how much he’s trying to impress her even when he’s trying to survive. Did you want to prioritize the romance equally with the horror?

Diez: One of the earlier cuts had an even longer first act. And we knew, “Okay, that’s too much. People want to see the wasps in action.” One of the first elevator pitches for the movie was “Garden State vs. Aliens.” We just wanted to have those two genres clash, to see what happens. And it’s what we did. Besides, we had to spend a little time without effects just to afford 90 minutes of film on our budget.

Monday: Gregory Kohn gives the thumbs-up to drugs in Come Down Molly.