Stephen Fingleton on his feature-length writing-directing debut, The Survivalist 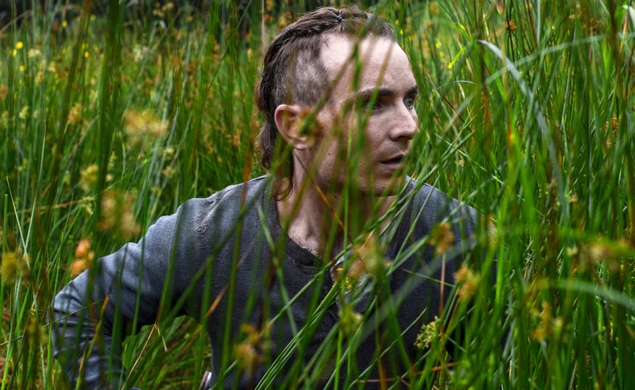 Tasha Robinson is at the Tribeca Film Festival in New York City, talking to filmmakers about their projects shortly after their premières. The Tribeca 10 interview series addresses some key ideas in these brand-new releases in 10 minutes or less.

Stephen Fingleton’s feature-length writing-directing debut, The Survivalist, opens with a shattering image: a strikingly intimate, moving close-up of a simple graph plotting the rise in world population against the rise of oil production. When the latter falls, the former soon follows—plummeting into a steep dive that reduces global Armageddon to a single red line onscreen. This film is a fine example of visually striking, low-budget science fiction: No complicated special effects, no heady technology, just a few people trying to survive after the end of the world, watching how the former drops to virtually nothing once the latter takes a dive. Martin McCann (’71) stars as a paranoid, tense loner eking out a solitary living in the woods, until two refugees (Mia Goth and Olwen Fouere) arrive to complicate his life. What follows is part human drama, part nonstop thriller. The Survivalist is currently seeking a U.S. distributor. It made its world première at the Tribeca Film Festival on Thursday, April 16.

The Dissolve: You had a lot to say in the Tribeca Q&A about your belief in the peak oil theory, and the danger we’re all in as a result. You cited a lot of facts supporting your conclusion. Why make this narrative film that uses that as a relatively distanced backdrop, instead of a more direct story or even a doc?

Stephen Fingleton: A lot of first-time directors, their goal is “I have got things to say. Here’s me setting up my stall.” And that should be the last fucking thing on anybody’s mind. It should be about transporting an audience somewhere completely different. What was important was that I believed that the world in this film could come into being. I put the odds at 10 percent. Everything that happens in the film is happening right now in Syria. People are getting eaten. People are getting burnt. The government’s collapsed. To paraphrase William Gibson, the apocalypse is already here—it’s just unevenly distributed. All those facts, all that information, were only important so far as to convince me that this was the case. My job was to convey the conviction of the characters. Rather than telling the audience what the world was, I showed them the shape of it through the ways the characters were deformed by it. That was the choice I made.

The Dissolve: So much of that is communicated without dialogue, just through body language and through their eyes. How did you work with the actors to reach that point?

Fingleton: The three of them are just brilliant actors, though with very different acting styles. I did what I could to get them to a place where they could not perform, but be their characters. And they had different ways of achieving that, but avoiding performance was key. If they’re being their characters, their eyes will not lie. That was the stage we had to get to. I think the second element was, they had to believe everything they were doing was completely realistic. If anything felt false, we wouldn’t do it. I was loath at any point to move an actor to a mark, or turn them for a camera angle. I would make a fuss about moving the camera rather than moving them. My director of photography has a strong documentary background, which is why I was attracted to him.

The Dissolve: That realism shows up in the film’s opening, as we watch your protagonist going about his life for a while. It’s not always clear what he’s doing, but he clearly knows a lot of tactics to keep himself alive. Did you research survivalist techniques for the film?

Fingleton: Martin did a course on survivalism, which was useful in some regards, like learning how to skin rabbits. I did some book research. My art director helped me fill in the gaps about farming and so on. He’s quite the expert.

The Dissolve: You talked a lot in the Q&A about how your cast revised the script significantly, and had a lot of input into what they felt should happen. What did the original script look like by comparison?

Fingleton: It had a lot more dialogue. It was fundamentally the same story. There are two subplots which aren’t in the finished film, because we were more sparing and minimalist in our approach. The best way to describe it is that the bones were the same, but the cast deepened the scenes, and the moments between the scenes, in ways I hadn’t conceived. In particular, in a film that’s very silent, they conveyed things with blocking that I wouldn’t have conceived. When we were revising the script, we’d go through and ask, “Do we need this scene? Is there a scene after this that needs this scene to exist?” If the answer was yes, we’d ask, “Do we need the dialogue?” If the answer was still yes, we’d ask, “Do we need all of the dialogue?” The name of the game was How Many Lines Can We Get Rid Of. Some of our executives were very cautious about this approach, but I ultimately felt this was the way it was going to be.

The Dissolve: Are you hoping people will approach this as a cautionary tale as well as a narrative or an experience?

Fingleton: I want it to be a film of hope. In a time of madness such as we’re at, I want to say that things will be okay in the end. Our place in the universe might not be as secure as we think, but things will be okay. I really wanted to pick at the choices of characters. I was drawn to the idea of a world that’s very, very selfish by necessity, but where characters choose to make sacrifices for others. Viktor Frankl’s Man’s Search For Meaning was a big influence in the script. It’s a 1946 memoir of surviving Auschwitz. I visited Auschwitz two weeks before we shot it. And there are many stories from there you’ll find reflected in decisions my characters make. Post-collapse films generally aren’t typically viewed as serious dramas, though The Road is probably an exception. But what I was trying to do here was make something about things that really are happening everywhere. Just because it’s science fiction doesn’t mean we shouldn’t take it seriously. It’s kind of a pre-documentary in that respect.

The Dissolve: The film goes to an extremely grim place, though. Is the hope you see just in the fact that people are still capable of kindness in this world?

Fingleton: I don’t know if in the end, the last person we see will be accepted in that situation or not. Ultimately, it doesn’t matter. It’s someone who has become a survivor. That’s the important part.