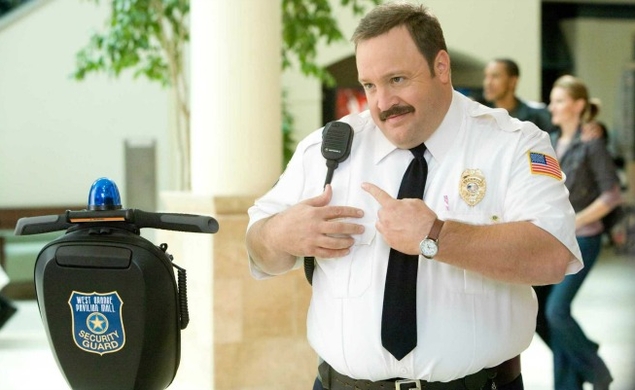 As anyone who has spent any time meandering about the seedier niches of the Internet knows, fan fiction is a ubiquitous feature of the web. Fan fiction allows fans to become creators, or at least re-appropriators of other people’s creations. Not surprisingly, most fan fiction tends to revolve around dashing, larger-than-life figures deeply embedded in our culture. For example, Star Trek is a particularly rich source for fan fiction. But what about the loser characters in pop culture, the Segway-driving, ugly-mustache-sporting security guards whose very names are an instant punchline?

I am talking, of course, about Paul Blart, a professional mall cop who roared back into action this weekend to be befuddlement of an audience that, understandably, thought the first film was a flop, and certainly not a big enough hit to inspire a sequel six years later. Yahoo reports, however, that there is actually a rich vein of Paul Blart Mall Cop fan fiction floating about the web and attracting the interest of people with way too much time on their hands.

The article offers cringe-worthy summaries of five representative pieces of Paul Blart fan fiction. First, the portly mall denizen squares off against a sumo wrestler from the Street Fighter series. Who will ultimately triumph? Read for yourself and find out, and then weep in shame for being so emotionally invested in a conflict between Paul Blart and a video-game character.

The next story involves a puzzlingly Blart-free narrative rooted in the villain from the first film, a small boy Blart finds and mentors, while the final entry is less a proper exercise in fan fiction than a grotesque, racist parody of our most beloved cinematic character.

So now that you know that this horrifying phenomenon exists, why not write some Paul Blart: Mall Cop fiction of your own? Here are some sample premises: