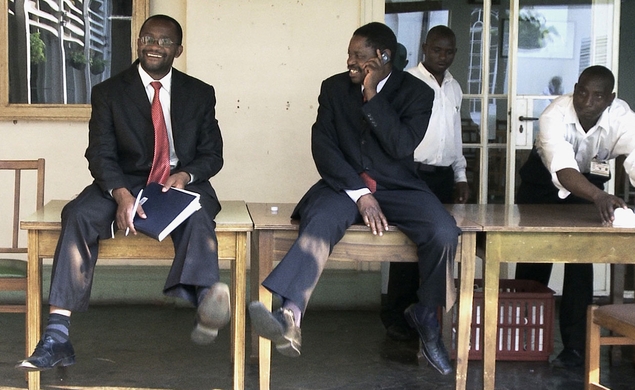 Tasha Robinson is at the Tribeca Film Festival in New York City, talking to filmmakers about their projects shortly after their premières. The Tribeca 10 interview series, which starts here, addresses these brand-new releases in 10 minutes or less. Check the Tribeca site to see which films are still playing. The festival continues through Sunday, April 26.

Zimbabwe’s constitutional-reform meetings may not sound like the substance of a riveting documentary, but they build plenty of nervous tension in Democrats. The first full-length feature from Danish documentarian Camilla Nielsson (co-director of 2009’s Mumbai Disconnected) took three years to film, as a popular uprising in the country led to an uncomfortable power-sharing arrangement between longtime dictator Robert Mugabe and the opposition party, who then agreed to co-draft a constitution for the country. Nielsson and her team, commissioned by the Danish Film Institute, capture fraud, intimidation, tampering, and violence at a series of public hearings, and dangerous manuvering and tantrums in committee, with co-chairs Paul Mangwana and David Mwonzora squaring off in a highly public confrontations that sent the latter to jail on trumped-up charges and put the former at the center of a media circus. Democrats is currently seeking a U.S. distributor. It made its North American première at the Tribeca Film Festival on Thursday, April 16.

The Dissolve: You start the film with interviews where people are talking directly to the camera, and return to that briefly again at the end. But for the most part, you’re just playing fly-on-the-wall, observing some fairly complicated situations without pressing for confessionals. Why did you want to pursue the story that way?

Camilla Nielsson: For a very specific reason. Even apart from the fact that I’m an anthropologist and I make observational films. But particularly for Zimbabwe—so many times, these stories are told through a white, colonial gaze. In a project of this nature, it’s so important to let it speak for itself. Of course my voice is still in there somehow, but I wanted not to ask questions, not to push an agenda, just to let things unfold. It’s funny, Zimbabwe is going through such a process of censorship right now, but one of the reasons the censorship board agreed to let this film through, they told me, was, “We really like the fact that Zimbabwe is talking.” So I was concerned about having white people to come in and tell them their own story. And I think they liked feeling that they could work unguarded, without a critical journalist breathing down their neck. So I told them, “I’m an anthropologist. I collect data. I’ll shape the story in the editing room, but it will be your story.”

The Dissolve: Did you never feel the pressure of censorship as you were filming? Did anyone ever say, “You can’t use what you just shot?” or anything similar?

Nielsson: One time, I was asked to leave the room. So 15 minutes later, I went back in, and was allowed to be there. I’m sure there were lot of things negotiated specifically when we were not there. I’m sure there were many very sensitive things they would have discussed on the phone, late at night, that I didn’t get to catch. But they gave us all-access, and they never took that card back. And that was also one of the conditions I made: I couldn’t go spend one and a half years filming something, and then they cut us off, and we would have no movie. So I made a very clear agreement from the beginning that they wouldn’t do that.

The Dissolve: There are very few women in the room during the actual constitution negotiations, and as you say, you’re white. Was it hard to feel as invisible as a documentarian wants to be?

Nielsson: No, because I was also the sound recordist on this film. Which was a specific choice. We didn’t want to have a large crew. There’s no tradition of documentary filmmaking in Zimbabwe, and we didn’t want to make a circus of our presence, so I did my own sound. And operating a boom mike in a big room, covering 20 people, is a lot of work. So I was always busy doing something else, and it looks like, “Well, they’re doing their work, I’m doing my work.” I think if I’d been in a corner taking notes, there would have been a different guardedness. And I enjoyed the work! It wasn’t a strategy from the beginning. We just wanted a minimal crew. But it worked out really well for that reason.

The Dissolve: There seems to be a friendship arc throughout the movie, as Mangwana and Mwonzora start off dubious about each other, and come to sympathize with each other. It even feels like Mangwana’s stance softens in part because he sees how unfairly the regime is treating Mwonzora. Is that what it felt like to you?

Nielsson: Of course we enforced that narrative in the editing, put a three-year arc about [Mangwana]’s development into a 100-minute film. But two things happened: I think when the violence broke out at the public hearings, and he almost got caught in it himself, that was a big moment of realization for him. It’s unheard-of that somebody attacks one of their own. And I could feel, after that incident, a change in his personality. And I think Mwonzora’s patient way, never meeting aggression with aggression—if you do that for three years, you’re keeping aggressive and you just meet a wall of patience, of diplomacy, of “Let’s talk about this, there’s other ways to do this,” it just has a disarming effect. They were both under pressure, they had the whole world against them, so they united, which is probably why they made such a big bond. And I think Mwonzora, on the other hand, really felt sorry for Mangwana when the shit hit the fan. So the arc of the relationship as you see it in the movie is how it happened. And they’re still friends!

The Dissolve: Did you engineer the scene at the end, where they sit together and talk about their experiences?

Nielsson: Yeah, I did. That’s the only scene in the film I set up. It was the last day of filming. I asked them if they wanted to evaluate. I wanted a brotherhood scene. Because after what happened with Mugabe, we could have ended it as a very dark tragedy, “Okay, back to square one,” or worse. But I thought there was a positive story in the development of their relationship, and I thought we needed to set that in stone. So I asked them if they would go for a walk in the park and evaluate what they had learned as people in this process. And they never did that. They talked about football and all sorts of things. And I said, “Okay, that’s it, I can’t stage anything with you guys, let’s just forget it.” And then Mangwana sat on the bench, and Mwonzora sat with him, and they were talking still about politics in South Africa. And I told my DP, “Let’s wrap.” But Mangwana gave me a sign. And then he dumped this information. And if you feel Mwonzora is reacting authentically, it’s because he was as surprised as we were that this story came out at that point. We all knew it had happened. I had asked him to talk about it a few times, but he would only talk about it off-camera. But he knew I was leaving the next day, and would probably never come back. And he gave us that last slice.

Tomorrow: Stephen Fingleton, of The Survivalist.