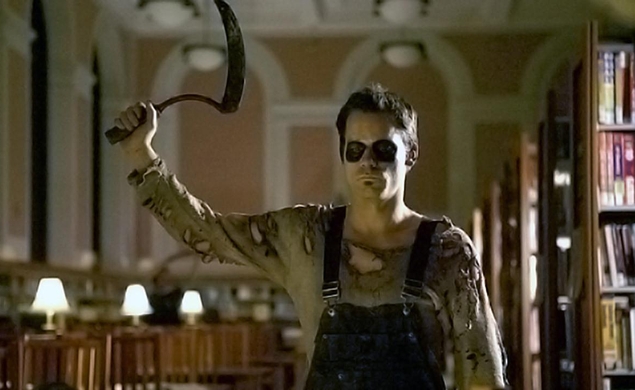 Imagine Man Bites Dog without the relentless nihilism. Imagine The Cabin In The Woods without the special-effects budget. Imagine Scream without the over-the-top cheese factor. Put those three imaginings together, and you have the awkwardly titled but still awfully charming 2006 horror-comedy indie Behind The Mask: The Rise Of Leslie Vernon. All four of these films deal to some degree with the ideas behind horror movies and horror-movie fans. And all four deal with serial murderers, to greater or lesser comic effect. But Leslie Vernon does it on a shoestring budget. This is the kind of lo-fi, smart storytelling that comes from a great idea executed with minimal resources—the process that produced horror like Resolution and Henry: Portrait Of A Serial Killer. Nathan Baesel stars as Leslie Vernon, a fanboy of the great slashers like Freddie and Jason. Like the star of Man Bites Dog, he has a documentary crew following him and interviewing him, in this case as he plots out the killing spree that’s going to make his name. But Leslie is a postmodern, genre-aware killer-to-be, and much of his plan involves setting up a movie-worthy slaughter: One where he’s done enough cardio to keep up with fleeing victims while still appearing to just be walking menacingly, and one where there are plenty of escape routes and weapons to hand, but he still comes across as unstoppable. Just listening to him lay out the plan, as if Jason from the Friday The 13th movies was a media-savvy mastermind who’d worked out all the details in advance, is fairly hilarious. But then the film takes a series of turns, and morphs into what it’s initially mocking. It’s clever, but more than that, it’s fun, and it’s clearly the work of genre fans who know horror’s strong points and weak points, and took advantage of both of them. It plays at 10:45 p.m. Eastern on Encore Suspense.