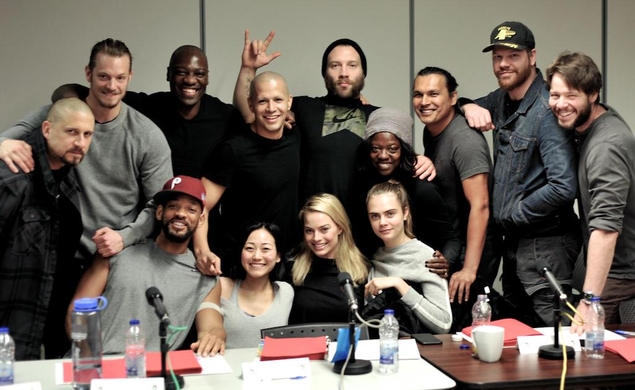 Like so many of us, Suicide Squad director David Ayer enjoys hanging out with his pals, shooting the breeze, and then sharing a pic or two of his good time fun with the wide world of social media. Hollywood directors, they’re relatable! Ayer was apparently hanging with his crew last night, inspiring him to casually drop a picture on the web, perhaps for all his other budz and followers and such to enjoy. Laidback and whatnot.

Ayer, of course, didn’t just tweet out a picture of some random pals, but of the entire cast of his upcoming DC film at their first table read (less Jared Leto, who was apparently doing something else instead, perhaps even taking the picture? Jared, you are a giver). At first glance, all the usual suspects are in place, including Will Smith, Margot Robbie, Joel Kinnaman, Jai Courtney, Cara Delevingne, and Viola Davis. Yet, crammed into the right side of the frame are three fresh faces. And missing? Joe Manganiello.

Latino Review reports that Ayer’s super casual photo is not only functioning as a neat way for DC fans to see the cast of Suicide Squad (mostly) assembled in one place, it’s also the announcement of three new cast members and the departure of another. According to the outlet, the film now includes the talents of Adam Beach, Ike Barinholtz, and David Parrack.

Beach and Barinholtz will be playing smaller roles, with Beach on board to play “martial-artist bad guy Ravan” and Barinholtz set to play Dr. Hugo Strange (a well-known Batman baddie who, unlike Marvel’s own Doctor Strange, doesn’t use magic to carry out his nefarious plans, but just a big brain). The real stunner, however, is who Parrack is playing: Deathstroke.

Manganiello was long rumored for the role—one that the team over at LR reports is “the standout part in the movie”—but it now appears he’s jumped ship (or was never fully on board, despite chatter to the contrary) to sign on for Pee-Wee’s Big Holiday, which is certainly, uhm, different. It’s different!

But while this Manganiello news is certainly unexpected, why has the world ignored the real story here: Ike Barinholtz is going to be a superhero?