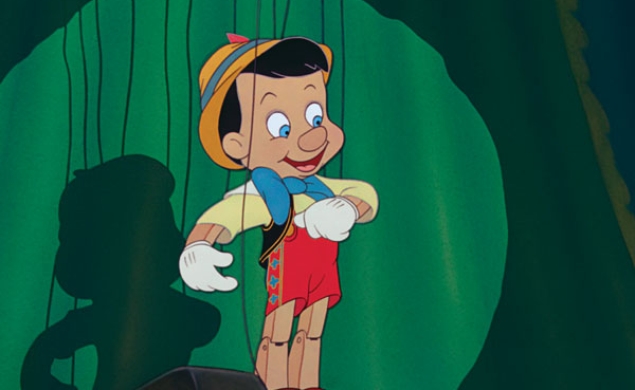 Oy Of The Day: Disney is developing a live-action Pinocchio
Good God. In what is now becoming a weekly development, Disney is planning another live-action movie. We just barely choked down the news of Mulan and Winnie-The-Pooh, Disney. Can you give us a second to digest, clear the table frantically, and run away from you? Oh, sorry, I forgot to mention that the movie is Pinocchio, but just insert any Disney title in there because they’re probably remaking that one, too. Peter Hedges is penning a feature “loosely based on the original Pinocchio story about a boy carved from wood who dreams of becoming a real child.” It’s sort of an extended metaphor for whatever the fuck is going on with Disney right now. Sit down, Disney. You’re in time out.

Sure, Why Not Of The Day: Lionsgate is adapting The Odyssey
Lionsgate is developing a “grand-scale retelling of history’s greatest voyage home,” Homer’s The Odyssey.  I mean, I hope it would be grand-scale? So much shit happens in The Odyssey, and I remember all of it and totally read the whole thing, yep. Francis Lawrence will direct, Peter Craig will write, and Nina Jacobson will produce. All of these people have worked on various Hunger Games movies, and the Deadline item mentions the Hunger Games movies so many times that it’s suspicious, so I have to assume that this version of The Odyssey will be reworked to star Jennifer Lawrence as Odysseus. (Wait, I typed that as a joke but now I really want it.) Unlike Odysseus, who took his sweet-ass time on his odyssey, gallivanting with all manner of degenerates, Lionsgate is on “a fast track” to produce this movie; production starts early next year.

No, Don’t Of The Day: Need For Speed sequel
A sequel to 2014’s Need For Speed, a tepid film about cars that feel chronically compelled to go very fast, is being developed. This is why we can’t have nice things. China Movie Channel, Jiaflix, and 1905.com have teamed with game publisher EA to make the sequel, much of which will be filmed in China with local talent. So, while I can’t say for sure that Aaron Paul is not currently living in China, he likely won’t be back. Anyway, this is just a preview of a future where all of our movies are about people doing a few other things but mostly just driving cars. Chefs driving cars, nuns driving cars, cats driving cars, hats driving cars, cars driving cars, news editors driving cars (but don’t ever let me drive cars).

All-Out Survivor Of The Day: Brie Larson in Free Fire
Brie Larson has joined the cast of Ben Wheatley’s Free Fire, replacing Olivia Wilde, who had to drop out “because of her schedule” ( “because of Tron”). Luke Evans, Armie Hammer, and Cillian Murphy are also set to star in the film, which is “set in 1978 in a deserted warehouse where a meeting between two gangs turns into a deadly shootout and all-out survival.” I don’t know what that last part means (that they all for sure survive?), but all sounds very #real. If anybody is keeping count, this is the first original movie I’ve written about today—no, wait, “sources” describe Free Fire as “Reservoir Dogs with a new twist.” The new twist is that they just drive more cars.

Potential On-Screen Lovers Of The Day: Joe Manganiello and Pee-wee Herman
Back to our regularly scheduled sequel programming! Magic Mike’s Joe Manganiello is joining Paul Reubens in Pee-wee’s Big Holiday. In the pic, which is naturally about goddamn cars, “Pee-wee takes his first holiday, the journey of a lifetime in an epic story of friendship and destiny.” Is Manganiello his friend? Or his destiny? I hope they are destined to be lovers, because otherwise this movie sounds boring. Regardless, the two are just friends in real life, assures Reubens. “Joe’s already my friend—and he’s tremendously talented and a terrific person…this totally makes up for being cut out of Magic Mike and Magic Mike 2.” Um, it’s called XXL, Paul. Manganiello takes it a step further: “Growing up, my Saturday mornings were all about Pee-wee Herman. I saw everything he did.” Everything??

Overall Winner Of The Day: A Cure For Wellness, starring Mia Goth and Dane DeHaan
Dane DeHaan and Mia Goth have joined A Cure For Wellness, a supernatural horror film from Gore Verbinski. The movie tells the story of “an employee (DeHaan) who is sent to rescue his boss from a European wellness spa, but soon realizes he’s trapped, and discovers that the facility has a more sinister purpose than just serving the health needs of his patients.” (Like making money? That’s called capitalism, homie.) Goth, who’s still negotiating, “will play a longtime patient who is oblivious to the spa director’s dark designs for her.” Nobody is driving cars or writing this as a sequel to anything, which means it wins my heart. I love you, A Cure For Wellness.