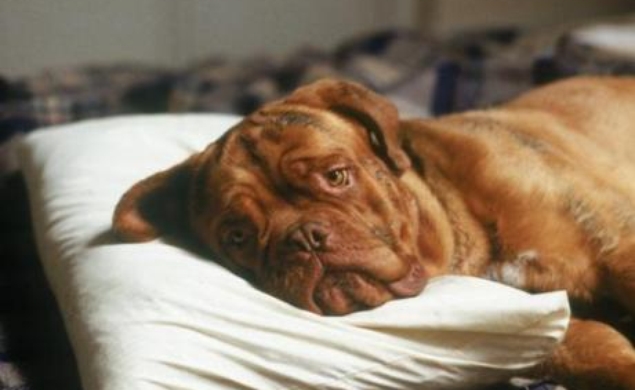 If you take just one thing away from my recent Forgotbuster piece on the inexplicably popular 1989 Tom Hanks-and-slobbery-dog comedy Turner & Hooch, it should be this: The dog fucking dies. After spending 90 minutes getting audiences emotionally invested in a seemingly repulsive but ultimately heroic dog’s life, happiness, and future, the filmmakers build toward a climax where a bad guy shoots a bullet into Hooch’s heart, killing him. I like to imagine that director Roger Spottiswoode was out that day and had his good friend Werner Herzog fill in, and that when Herzog saw that, in the original script, the dog was merely grazed by the gun shot and survives with minor damage, he demanded changes. I imagine an enraged Herzog screaming at the crew, “It is only by the violent destruction of this beautiful creature that children will be able to realize the innate cruelty of nature, and how life is little but a nightmarish gauntlet of horrors en route to a cold and barren grave.” Consequently, they didn’t just fake-shoot Beasley, the dog-actor playing Hooch, but brought in a machine gun, spraying round after round into him until he was dead, then bringing in a man with a flamethrower to char Beasley’s corpse so that no sequel could be made that might undercut the Herzogian bleakness of the Turner & Hooch ending.

As if to apologize to the universe for killing Beasley, a canine actor with the same name is touted as the star of the unsuccessful Turner & Hooch spin-off pilot, which aired once on television alongside the pilot for Poochinski, a show about a cop played by Peter Boyle who is reincarnated as a sassy mutt. It was pitched as a “two dog night” and boy oh boy did it live up to its billing.

For the Turner & Hooch spin-off, Hanks was shockingly unable to return to his role as fussbudget cop Turner, so they went and got the 379th best alternative: Thomas F. Wilson, best known as Biff Tannen in the Back To The Future trilogy, the gym coach on Freaks And Geeks, and an amiable and well-liked stand-up comic.

Wilson gives it his all, even borrowing some of Tom Hanks’ vocal inflections, but he cannot help but come off as a poor substitute for the real thing. The pilot finds Turner, now the owner of Hooch, happily married to the veterinarian played by Mare Winningham in the film and Wendee Pratt here. The tension between the neatness-obsessed Turner and the slovenly Hooch provided the fundamental comic tension in the movie, even if it never led to anything resembling laughs. The pilot tries to have it both ways; Turner professes to hate Hooch and is terrorized by his freewheeling ways in a manner that is nearly identical to the movie, yet he also clearly loves Hooch and values him as a partner.

Where previous Mutations entry Benji, Zax And The Alien Prince seemed to think that Benji, one of the most beloved dogs ever, wouldn’t be enough to sustain a Saturday-morning kids' show and needed to be augmented by an effete robot and an asshole boy prince from outer space, Turner & Hooch doesn’t seem to think either Turner or Hooch is enough to sustain a show, which proved accurate.