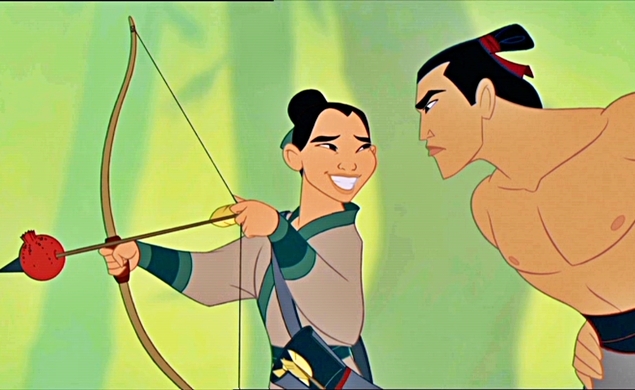 Late-Breaking Disney Announcement Of The Day: There will be a live-action Mulan
Let’s get down to business: Disney has announced that it will produce a live-action version of Mulan, one of its tentpole animated movies that centers on the Chinese legend of a female warrior who rocked the original man bun. (Sort of... it’s complex, as are all of today’s Newsies.) This news comes on the (glass) heels of the live-action Cinderella’s box-office success and also on the heels of the Newsies, which almost went to print before this announcement. Disney, can you get your shit together, please? I finish Newsies around 4 p.m. Central, so if you push out big news at 3:46 p.m. it makes it hard for me to be remotely clever about it. K, thanks.

Nepotistic Monsters Of the Day: Emily Blunt and John Krasinski
Emily Blunt has joined the cast of Animal Crackers, an animated film already featuring the voices of Danny DeVito, Sylvester Stallone, Ian McKellan, and John Krasinski. In a hilarious turn of events (if raw, unfiltered nepotism is a joke to you), Blunt and Krasinski, who are married in real life, will also play a husband-and-wife duo on screen, who “inherit a ramshackle circus and a mysterious box of animal crackers biscuits [ed. note: a British person wrote this, I think] that turns people who eat them into animals.” Honestly, animal crackers already have that effect on mostly everybody; they are so fucking delicious. Show me a human who can stay calm near an animal cracker and I’ll show you a liar and then eat their animal cracker with wild abandon.

You Wish This Were Your Family Of The Day: Stephen Dorff and Jennifer Morrison and a magic horse
Stephen Dorff and Jennifer Morrison have joined the cast of Albion: Rise Of The Danann. The flick, from first-time director Castille Landon and Sweet Tomato films, is being billed as a “fantasy family film,” which is to say it depicts the family you wish you had but you don’t, sorry. It centers on a “12-year-old girl, played by Avery Rath, who is carried to a faraway land on a magic horse.” Sounds like kidnapping by force (or by horse!!) to me, but I’m not an expert in fantasy family law. Dorff will play the girl’s father, and Morrison will appear as a “mystical woman in the alternate universe.” Filming has begun in Michigan and Florida, but the bulk of the film is to be shot in Bulgaria, because all of these places are basically the same.

How Strong? Of The Day: Mark Strong, who has joined real movie Jadotville
Mark Strong has joined Jamie Dornan in Netflix’s Jadotville. The film, set in 1961, centers on the “real-life siege of an Irish UN battalion by 3,000 Congolese troops, led by French and Belgian mercenaries working for mining companies.” “There’s a real fashion at the moment for real-life based on or inspired by real events,” said Strong. He didn’t say this out loud, just with his eyes, but he was referring to the fact that Animal Crackers was inspired by the way that real people respond to animal crackers (violently, with much passion).

Oh No/Hooray Of The Day: NBC will adapt The Wiz
It’s highly probable that right now, somewhere in the world, Christopher Walken is raising a glass of whiskey to himself, chortling as he reflects on his performance as Captain Hook in NBC’s Peter Pan Live! last year. It was, in a word, surreal. And in another word, bad. And in a third and most important word, unforgettable. Which is why I’ve been waiting with bated breath to see what classic musical the snappy young network might reimagine next. Good news: It is The Wiz.  NBC will produce the hit Broadway musical on December 3, this time with the help of Cirque du Soleil. If, like Mark Strong, you know anything about history and things that are real, you’ll know that The Wiz is already adapted from The Wonderful Wizard Of Oz, which is already adapted from Albion, Rise Of The Danaan.

What Is Reality? Of The Day: The Weinstein Company bought “not actual story” Gold
The Weinstein Company has paid around $15 million for the U.S. rights to Gold, starring Matthew McConaughey and Edgar Ramirez. Gold in “inspired but isn’t the actual story” of the 1993 Bre-X Mineral Corporation mining scandal, in which “vast amounts of gold were reportedly discovered in the Indonesian jungle.” An interesting distinction that makes little sense, to be sure, but a distinction nonetheless. So just to recap, as we’ve all had our minds bent by today’s reality-twisting Newsies: Jadotville is real, Albion, Rise Of The Danaan is a horse-kidnapping fantasy, you will never have Stephen Dorff as your cool dad, Gold is inspired by reality but isn’t real because real gold is too expensive to film, Animal Crackers is a true story about how we cannot control ourselves when faced with anthropomorphized crackers, and Helen Of Fast And Furious Troy is happening.