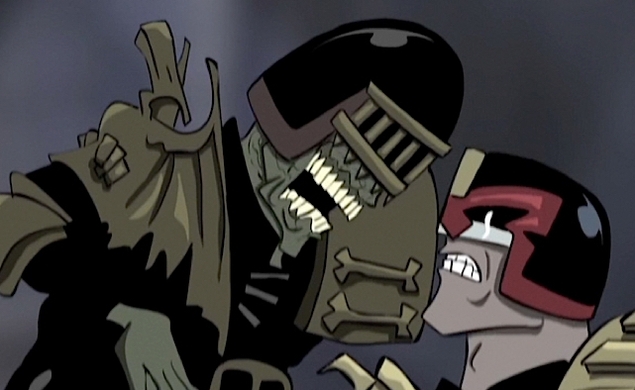 I first encountered a gentleman named Adi Shankar a little while back in a Newsreel post highlighting his “gritty” bootleg short film “Power/Rangers,” a take on The Mighty Morphin Power Rangers as a grim action-thriller about adults traumatized by having to serve as child soldiers in their brutal youth. The short was impressive on a technical level, but not being the right age for The Mighty Morphin Power Rangers nostalgia, the whole enterprise struck me as dour, joyless, and faux-edgy. “Power/Rangers”—which featured the semi-high-powered likes of Torque director Joseph Kahn (who also directed the batshit crazy teen comedy Detention) behind the camera and James Van Der Beek in front of it—was taken down by order of the folks behind Rangers, then put back up on the Internet not long after.

Shankar, when not applying too much eyeliner and being on YouTube, produces actual big-budget movies, including the gritty 2012 reboot of Dredd that people seemed to like, as well as other macho opuses like The Grey.  It’s too bad Shankar seems a bit like a self-aggrandizing poser in Troy Duffy mode, because what he’s doing on YouTube with his “Bootleg” series—taking popular characters from his youth and twisting and contorting them in dark, unauthorized ways—makes his mini-epics perfect for this column. So I overlooked the fact that Shankar looks like Mystery, the head goon from the risible VH1 reality show The Pick-Up Artist, and decided to give a gander to one of the other projects in Shankar’s “Bootleg” project: “Judge Dredd: Superfiend.”

“Judge Dredd: Superfiend” centers on one of the other Judges, Judge Sydney, a.k.a, Judge Death, a helmet-wearing exemplar of futuristic law in a dystopian society who fills the role of judge, jury and executioner. In the opening sequence, his voice rich with contempt, he calls in a rapist he’s just caught to a bored dispatcher who tells him the punishment for rape is mild, even when the victim is young. But if the victim is killed by the rapist, then murder is the proscribed punishment, so Death, whose idea of justice is heavy on indiscriminate slaughter, kills the victim so he can have justification to kill the rapist as well.

We then flash back to Sydney/Death’s childhood as the son of a deranged dentist who sees his clients less as patients to be treated than as people to be killed. Death learns the fine art of killing from his eager teacher of a father and grows up to be a Judge. It’s a bold move, making the first short films in the mini-series to be about Judge Death (who, true to his name, ceases to be among the living at the end of the second film, after tangling with the Angel Gang, a group of drug-dealers even more kill-crazy than the Judges of the era).

Death sums up his bumper-sticker-ready philosophy when he hisses, “The real crime is life and the punishment is death.” Death isn’t at all shy about meting out that ultimate punishment to all those he finds guilty of being non-dead. Dredd isn’t even introduced until deep into the third short film. He shares Death’s rage-filled rasp, but is less gung-ho about killing people for no reason. The third episode introduces another adversary in Dredd’s brother Rico, who escapes from prison and reconnects with his adorable daughter Vienna and proves a quick study in doling out the kind of brutal justice the future demands.

In the ugly world of “Judge Dredd” the good guys are defined by being less evil than the bad guys. Judge Dredd emerges as hero by default; we’re tempted to root for him only because he’s less psychotic and obsessed with slaughter than his brother and Judge Death. In another bold storytelling choice, he only really becomes a major factor in the series at the very end; “Superfiend” is as obsessed with Death and Rico as it is Dredd. There’s a twisted final sick joke in Dredd bringing Rico back to life solely so that he can kill him.

I was as impressed by “Judge Dredd: Superfiend” as I was underwhelmed by “Power/Rangers.” That’s because “Judge Dredd” is rich in dark, blood-splattered humor and has fully realized its brutal yet intermittently whimsical world, whereas “Power/Rangers” is grim and humorless. If it was Shankar’s intention to use these shorts to inspire people to want to see his 2012 live-action version of “Judge Dredd,” he succeeded, as I’m adding it to my Netflix queue now.