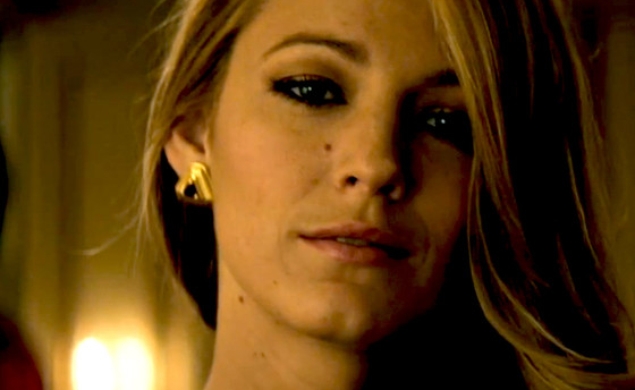 Snappiest Pun Of The Day: All I See Is You (it’s about a blind person, get it?)
Artisanal vintage vase Blake Lively and Jason Clarke have signed on to star in Marc Foster’s (World War Z) next film, All I See Is You. The title is a pun, y’all! Somebody sound the pun airhorn! I’ll wait. The movie tells the story of a blind woman and her husband who, “upon restoration of her sight, begin to discover previously unseen [pun airhorn] and disturbing details about themselves, their marriage, and their lives.” For instance, Blake starts to notice that Jason shops exclusively at the Men’s Wearhouse and Jason notices that Blake is running a pretentious website.

Unique Space Of Great Beauty Of The Day: Lord Of The Rings theme park in Spain
The town of Rincon de La Victoria, Spain, recently announced it’ll be building a Lord Of The Rings theme park called “La Comarca,” which roughly translates to “The Shire.” La Comarca will be a 20-acre park that costs about $2 million, which is not very big in scale compared to other theme parks and not very big in cash compared to all of the Lord Of The Rings movies. The mayor of the town told Euro Weekly News, “It will be a place in which family leisure, sports and nature will go hand-in-hand in a unique space of great beauty set in a time of fairy tales and the magic of the elves.” That quote sounds like a euphemistic bid for a dystopian communist society, but I am 100 percent okay with it and I will see you there in my charcoal jumpsuit.

More Legos, More Star Wars, No Lust Of The Day: Lego Star Wars: Droid Tales
Disney XD has picked up Lego Star Wars: Droid Tales, an animated take on the six Star Wars movies. This time, though, the stories will be “retold through the eyes of the robots C-3PO and R2-D2 in a brand new story.” If this were my retelling, the stories would be “retold through the eyes of robots C-3PO and R2-D2 who are and always have been lovers and that makes everything way more interesting.” Disney’s version has them being kidnapped and remaining platonic friends with palpable sexual tension, which is whatever.

Stop The Madness Of The Day: Robin Hood movies
Speaking of remaking things because money, there are now no fewer than five (5) separate Robin Hood movies in development. One is called Robin Hood: Origins, a “grittier version of the rogue do-gooder” from writer Joby Harold and Leonardo DiCaprio’s Appian Way production company; one is called Nottingham & Hood, a “revisionist take on the Robin Hood legend” aiming for a “Pirates Of The Caribbean tone” acquired by Disney (Disney, you have too much shit going on; please try to focus!); and a third is called Hood, will be produced by Sony, and promises to be “tonally similar to the Fast & Furious and Mission Impossible movies.” Oh, plus some other “smaller entries,” like Brandon Slagle’s Robin Hood And The Prince Of Aragon, which will be a “vibrant pop punk retelling,” and a “future-set sci-fi movie” called Robin Hood 2058 by American Sniper’s Jason Hall.

Let’s all pause and look at the damage we have wrought on whatever fragile system used to keep everybody from making hundreds of Robin Hood movies. Our hands are not clean. Is it too late to go back? I have to lie down (forever).

Less Snappy, But Still Pretty Snappy, Pun Of The Day: Looking For Alaska
Scott Neustadter and Michael H. Weber, who wrote the movie adaptation of John Green’s The Fault In Our Stars—a documentary about how female celebrities look without makeup—are re-teaming to write Looking For Alaska. It’s the pair’s third adaptation of one of Green’s novels—they’re also behind Paper Towns, out this summer—and it tells the story of a teen named Miles who goes to boarding school and “meets an enigmatic student named Alaska, and begins to fall for her.” PUN HORN. John Green loves to kill (his teen protagonists), so somebody probably dies in this movie and probably very tragically. Sarah Polley was previously slated to direct this, but it’s unclear whether she still will or if she’s signed on to direct Robin Hood: Because We Can. Sarah, please feel free to chime in in the comments.

Goodbye For Two Weeks Of The Day: Me
Because of Robin Hood movies, I’m going on a two-week vacation to the site of the future Lord Of The Rings theme park. I need to clear my mind of men in tights and Lego Droids, be one with nature in a unique space of great beauty set in a time of fairy tales and the magic of the elves.

Just kidding; I love men in tights. I’m going to Vietnam and Thailand to visit my little brother. I’ll be back and jet-lagged as hell on Monday, March 16, so take these two weeks to reread all of the old Newsies 400 times, commit them to memory, rewrite them into YA novels, and adapt them as films. I will miss you all and will definitely bring you back thousands of dollars worth of souvenirs.