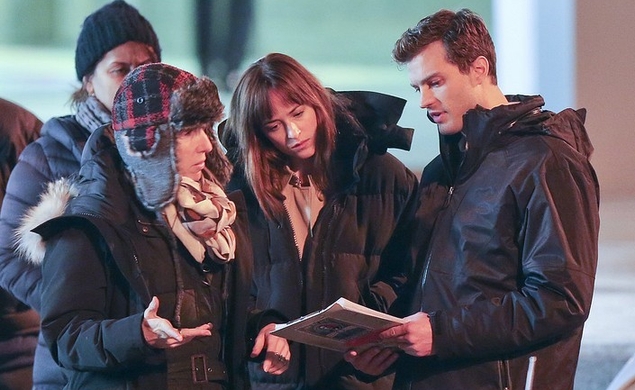 It was hard to hear over the din of 10 million thinkpieces, but quite a lot of the Fifty Shades Of Grey press focused on the contentious relationship (not the sexy kind) between author E.L. James and director Sam Taylor-Johnson. Understandably, the two came at Fifty Shades from very different places: James wanted to protect the source material and honor the relationship she’d painstakingly built with her rabid fan base, while Taylor-Johnson, ostensibly, wanted to at least attempt to protect the audience from hearing 14,000 variations on “holy crap” and honor the basic tenets of good taste. Neither can be blamed for holding strong to her position, but both are equally responsible for allowing the line “I’m fifty shades of fucked up” to actually exit an actor’s mouth.

Today comes “news” from The Daily Mail that Taylor-Johnson has “pulled out” of the film’s sequels as a result of these squabbles. A “senior film insider” told the pub “Sam won’t be back for the Fifty Shades sequels. She wants out and Universal knows that’s the right decision. Her relationship with [James] has become absolutely toxic—they despise each other and blame each other for the problems with the film.” (If by “problems,” this film-insider means millions of dollars, then I’m with him so far.)

Prior to this, both women have spoken openly and carefully about their disagreements surrounding Fifty Shades. Taylor-Johnson told Porter magazine, “It was difficult, I’m not going to lie…We definitely fought, but they were creative fights, and we would resolve them. We would have proper on-set ‘barneys,’ and I’m not confrontational, but it was about finding a way between the two of us, satisfying her vision of what she’d written as well as my need to visualize this person onscreen, but, you know, we got there.” James—who helped handpick and effused over Taylor-Johnson last year—echoed Taylor-Johnson both in vagueness and Britishness, telling Digital Spy, “It was hard in places. But any creative process they’re going to have disagreements between all sorts of people, but we got there in the end and I think the fans will be really pleased.” She’s right—it’s not uncommon to have creative tension and occasional dissension on a film set—so if things really went down as Taylor-Johnson and James say they did, there’s not really too much of a story here, right? Just two professionals trying to do their jobs, when their jobs are to make a fairy-tale BDSM blockbuster that offends nobody and also turns everybody on.

Well, several “sources” were more explicit, less polite, and more imaginative (just like the version of the film James wanted to make!) about those on-set barneys, sharing highly specific and occasionally surreal details that led to a deluge of press that often veered into “catfight!!!” and “Can two successful women get along? No, because women are back-stabbing and threatened by each other” territory. Even if all of the stories are true—James and Taylor-Johnson hate each other and can’t even agree about the seductive powers of jellyfish—it’s no coincidence that Fifty Shades is one of the most successful women-helmed films and a film that’s receiving undue attention for its behind-the-scenes female relationships. Here’s a brief look at what the two allegedly clashed over, according to sources that may or may not have any idea what they’re talking about:

The film’s ending. The book and film both end when Anastasia Steele (Dakota Johnson) leaves Christian Grey (Jamie Dornan) after he whips her too hard. Apparently James wanted the final word in the script to be “stop,” while Taylor-Johnson wanted it to be “red,” which was the couple’s safe word in the original tome. The Hollywood Reporter claims the film ended with “stop,” but I recall it ending with the two of them saying each other’s names as an elevator door closes between them. Winner: Neither?

The film’s tone. James wanted the film to be as “racy” as the book. Taylor-Johnson “wanted the movie to be more than just a collection of S&M scenes.” Winner: Taylor-Johnson, who deprived us of all manner of tampon-related erotica.

The film’s use of jellyfish. Taylor-Johnson wanted to use a jellyfish as sexual innuendo. “Everybody else”—i.e., James—was all, “What the fuck? No.” Winner: James, and, if this is true, the general public.

The film’s use of double-breasted suits. Johnson and costume designer Mark Bridges “conceived of an idea for Christian’s clothes to change through the film, tracking the way he becomes more open and loving toward Anastasia, from a double-breasted suit in one scene to a three-piece suit in the next, then peeling away and softening textures as the story goes on. They custom-made and tested a double-breasted suit, but ‘our excitement was short-lived as word came down to us from the powers that be that double-breasted suits weren’t sexy and we should stick to single-breasted. We were disappointed in having to change Christian’s first film moment but were able to use the metaphor of self-protection of the vest in his next change,’ Bridges says. ‘I respected [Erika’s] opinion and took her suggestions seriously, always discussing [her] notes with Sam before finally putting them into the film.’ ” Winner: Bridges, for falling on his sword and putting aside his devotion to metaphorical clothing.

The film’s depiction of Christian’s playroom: Taylor-Johnson wanted this to be “womb-like but masculine, with a ritualistic aspect to the decor and furnishings.” James wanted many of Christian’s “sexual implements” to be hidden in drawers, like in the book. Winner: Taylor-Johnson, who understands that nobody has time to look through drawers in a sex dungeon.

Good movies in general. Taylor-Johnson thought Nicolas Roeg’s Don’t Look Now had one of “the best sex scenes in any film.” James’s favorite films are “Casablanca, Good Will Hunting, Cabaret, Aliens, The Shawshank Redemption, Finding Nemo, and It’s A Wonderful Life.” Winner: Both, because people can like different movies and still work together.

Taylor-Johnson and Universal have yet to confirm any reports about her exit, but if it’s true that she’s leaving a highly lucrative franchise just as it’s ramping up, I can’t imagine that it isn’t partly due to the public’s fixation on whether she can be a professional without letting her hysterical, womanly emotions fuck it all up.