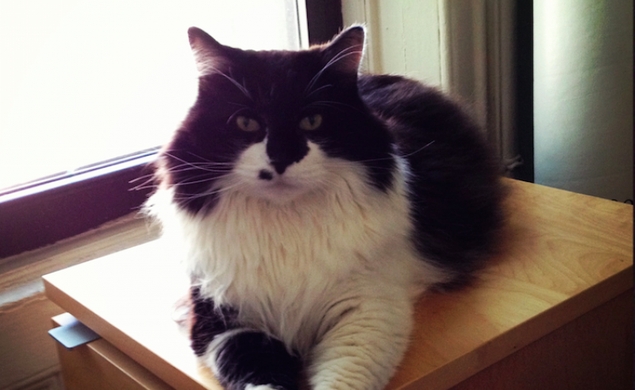 The Internet is frequently used as a tool for evil. It can be a fetid cesspool, where bullies hide under fake names and anonymity to harass and antagonize people who are different, or people who are the same, or just people at all. That’s why it’s always nice to see people use the Internet for nice, good reasons, rather than to call somebody on the other side of the world a real first-class jerkermer for disagreeing with you about the quality of an episode of Game Of Thrones. So hats off to Listen Up Philip director Alex Ross Perry, whose last film, a prickly comedy-drama of literary ambition and personal toxicity, was a big favorite here at The Dissolve and elsewhere.

Instead of luring underage women into a bus so he can degrade them on camera and post it online, Perry is trying to raise money to save his sick cat Fluffy, who figured so prominently in Listen Up Philip that he has his own IMDb page, appeared on a pet-centric podcast, and made Fandor’s list of the most memorable animals in movies of the year. Last year, Perry learned that Fluffy had a tumor in his nose that’s since revealed itself to be a cancerous lymphoma. Fluffy has been undergoing successful chemo and radiation treatments, but they’ve proven prohibitively expensive for the independent filmmaker and his partner, Anna.

So far, response to the GoFundMe page has been encouraging. They’ve raised  $5,000 of their $11,000 goal in a single day, but they’ve still got $6,000 to go. So if you love Listen Up Philip, Fluffy the Cat, or just animals in general, this is probably a better way to spend your money than signing up for more of those online girlie mags. Also, it’s a damn cute cat.