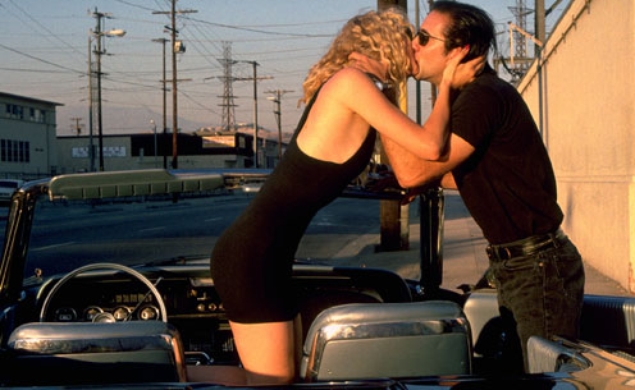 Tasha Robinson, Wild At Heart (1990): David Lynch has always been a bit of a Boy Scout: I love the famous story about him directing Dennis Hopper on Blue Velvet, pointing to the word “fuck” in the script because he was uncomfortable saying it. “Now, when you say this word here…” “David,  you wrote that word!” And yet his movies and TV shows have always been packed with twisted sex and violence, as though he were trying to express something unpleasant lurking underneath his own discomfort and repression. So I’ve always been surprised at how relatively sexually healthy and positive Wild At Heart is. Sailor (Nic Cage) and Lula (Laura Dern) are crazy about each other, and they express it physically and loyally. But it’s more striking to me that hearing Sailor lustily describe a past sexual escapade turns Lula on rather than making her jealous. There’s certainly some non-positive sexual leering in the film, particularly from Willem Dafoe’s creepy character Bobby Peru, but he’s held up as a twisted anomaly compared to Sailor and Lula’s energetic lust. I was talking to my partner about this over IM, and he suggested the story actually revolves around good sexual thinking vs. bad: “Lula’s mom thinks sex is a commodity, Grace thinks it’s death, Bobby thinks it’s about power, the pornographers think it’s an occupation. Sailor and Lula think sex is fun.” Good point.

Scott Tobias, The Lady Eve (1941): As Jean Harrington in Preston Sturges’ classic screwball comedy, a scorching Barbara Stanwyck plays a professional thief who uses her considerable wiles to separate naive ale magnate Charles Pike (Henry Fonda) from his fortune. That’s the plan, anyway, until love intervenes, followed by heartbreak, revenge, and eventual reconciliation. To call Jean’s sexual advances on Charles “forward” would be putting it mildly: She so overwhelms him that he’s not so much transfixed as paralyzed. Sturges sets the audience up for a tale of a wicked woman redeemed by the love of a true-hearted man, but in fact the opposite is true. Jean and Charles have to come to terms, but it’s Charles who has to do most of the bending, because in order to love Jean, he has to drop his hang-ups about her criminal and sexual past and grow up a little. Based on the evidence here, the rewards for doing so will be substantial.

Keith Phipps, Say Anything... (1989): I wish Cameron Crowe’s Say Anything... had come out earlier in the 1980s. By the time it arrived, I was a teen who wanted to be older than my years and a little suspicious of movies targeted at or featuring teens, any movie targeted at or featuring teens. Consequently, I didn’t end up seeing Say Anything... until the mid-’90s, when I’d started to grow out of being a snob. What did I get instead in the years when I was watching movies trying to explain the worlds of sex and teendom to me? Horny guys crossing the border to sleep with prostitutes in Losin’ It, Doug McKeon desperately groping Kelly Preston while the Platters played in Mischief, date rape played for laughs in Revenge Of The Nerds, Peeping Tom behavior played for laughs virtually everywhere, and whatever messed-up sexual politics were going on in Sixteen Candles. In Say Anything... John Cusack’s Lloyd Dobbler loses his virginity to Ione Skye’s Diane Court, and it’s not a matter of him winning a hard-fought victory or clearing a level in a videogame or making the earth open up. It’s something that happens between the two of them that leaves him moved and vulnerable. This wasn’t scoring or getting away with something naughty, and I hadn’t really seen sex, particularly sex between teens, portrayed that way before. I’m not even sure I’ve seen it portrayed that way since.

Rachel Handler, Pleasantville (1998): Pleasantville isn’t the first movie that comes to mind as a paragon of sex-positivity. On its surface, it’s a simple, straightforward movie about how the times are a changin’, set primarily inside the titular 1950s sitcom: a black-and-white universe where George Parker’s (William H. Macy) wife Betty (Joan Allen) exists solely to serve him, where firemen exist solely to rescue cats from trees, and where everybody’s a virgin. But when—thanks to a magical remote!—modern-day teenage twins David (Tobey Maguire) and Jennifer (Reese Witherspoon) become newly minted citizens of Pleasantville, it’s not so they can learn how much simpler and happier life was in 1958. Instead, it’s to show the town of Pleasantville what they’re missing—namely, a good roll in the hay. It’s an unexpected message from a movie of this caliber and type, and a welcome one. Baby-faced Jennifer starts having car-sex with the most attractive human in town/the world at large (Paul Walker), and soon, Betty is pleasuring herself in the tub and sleeping with the owner of the local soda fountain (Jeff Daniels). For the two women—but not necessarily the men they sleep with—embracing their sexuality means that their respective worlds turn from black-and-white to color. (Very on the nose, Gary Ross, but we’ll take it.) And though it first appears that Betty and Jennifer will be punished for the twin sins of sexual agency and enjoyment, the movie ultimately paints their sexual awakening as a positive force, championing sex as a means of self-discovery and self-expression for women (who, you may recall, have been historically shamed for such things). Plus, a tree bursts into flames when Betty orgasms, so there’s that.