The first bad movie we ever saw

by the Dissolve staff 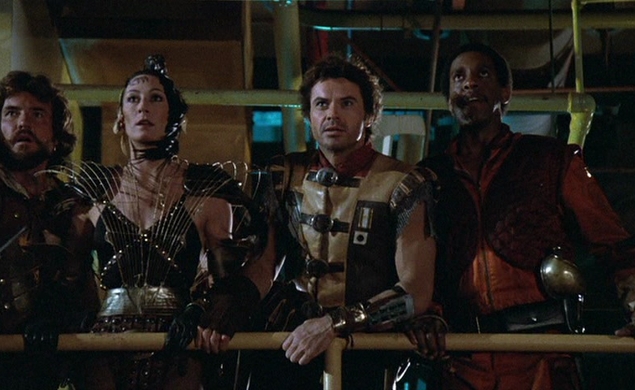 Here at The Dissolve, we talk a lot about films we love—films that moved us, shaped us, and changed our lives. In the spirit of January, which is a terrible month, we decided to look back on the first terrible movies we ever saw. These movies moved us, shaped us, and changed our lives, too. Just, you know, in a bad way. Here are the films that first woke us up to the staggering reality that not all features are for all tastes, expectations, or quality standards.

Tasha: When Scott wrote his recent Exposition about the movies he does or doesn’t choose to revisit, and led off by citing how much he admired Ice Pirates at age 13 (“the greatest space adventure of all time,” he said, about a movie released four years after The Empire Strikes Back) it gave me a good chuckle. We disagree vehemently about a lot of movies and movie-related issues—it’s become a running joke over our 15 years of working together—and here was evidence that we started the habit long before we met each other. I also encountered Ice Pirates in my early teens, and I still remember the bitter taste of my resentment—not so much at the specific crude, broad 1980s-comedy humor, but at my first real evidence that sometimes actual professionals spend real movie-money on writing, shooting, promoting, and distributing lame crap. There’s no fan like a teenage fan, but there’s also no contempt like teenage contempt, and I hated this movie in a completely outsized way. Hey look, it’s a roaming “space herpe.” Take that, Alien!

Keith: I saw Ice Pirates in the theater and hated it. Sorry, Scott, I have to pile on. But Ice Pirates didn’t give me the “Did I just get cheated?” feeling I got from seeing Cannonball Run II at the suburban dollar theater in my hometown. Admittedly, this place can make any movie seem bad: The door opens directly to the lobby, which means light comes flooding in whenever someone goes to the bathroom or arrives late. And I'm pretty sure it never upgraded to stereo. Looking it up online, I see it’s currently showing Interstellar. I can only imagine what that viewing experience is like. But enough digression: Even under those undemanding circumstances, I knew Cannonball Run II sucked. The gags were corny, the stunts less-than-thrilling, and the theme was by Menudo. And while I didn't have the firmest grasp on who Frank Sinatra, Dean Martin, Sammy Davis Jr., and Shirley MacLaine were, I could tell even they were pretty embarrassed by the movie. Here’s the thrilling conclusion:

Rachel: I’ve established that I wasn’t really allowed to see many “adult” movies as a kid, outside of the horror films my dad paradoxically deemed appropriate. (Like The Shining. Definitely not an adult movie. Nope.) So my “good movie” bar was set preeetty low as a child. I took in every Disney movie with unadulterated glee, mainlined Mary-Kate and Ashley Olsen movies, and even unironically lapped up the Look Who’s Talking films, mostly just excited that I was allowed to watch anthropomorphized sperm speak to each other. But the first movie I remember completely turning me off was 1998’s Jack Frost. Billed as a “comedy-fantasy-drama,” it was deemed milquetoast enough for my young and impressionable mind. Though it’s simplistic, silly, and relatively benign (…definitely when compared to The Shining), for an already anxiety-prone 11-year-old girl, it’s also a disturbing and confusing trip into the uncanny valley, exploiting children’s fears of their parents’ mortality, and of inanimate objects springing to life. The movie stars Michael Keaton as a flaky musician and father who suddenly, tragically dies in a car accident, then comes back to life as a terrifying snowman. Those beady little coal eyes! That scarf! All those Zappa kids! Putting aside the fact that Jack Frost is inarguably lazy, tone-deaf, and awful, through the eyes of a child, it’s also deeply worrying and depressing. I mean, Keaton fucking melts at the end.

Nathan: I was an indiscriminate consumer of movies as a kid: If it was in theaters, or on television, or available on VCR, then dammit, I wanted to see it. And like most kids, I didn’t have particularly well-developed critical faculties. But I think it was during a screening of Ron Howard’s then-timely, now-horrifically dated East-meets-West culture-clash comedy Gung Ho that I first realized not all movies were good. Some were sloppy, insulting, and even to my 10-year-old mind, filled with the kind of cartoonish stereotypes I already found offensive. So fuck you, Gung Ho, for disabusing me of the notion that all movies were good, and tainting my incredible respect for star Michael Keaton.

Scott: I have to admit, I struggled with this question—in part because it’s hard to remember my childhood all that vividly, and in part because I tended to like everything I saw. I can recall watching movies projected in the elementary-school gymnasium, where the entire student body would sit "Indian-style"—or “criss-cross applesauce,” as they say today—on the floor to watch some Disney live-action comedy. My tastes weren’t refined enough to recognize the flaws in movies like Gus, a Tim Conway/Don Knotts team-up about a field-goal-kicking mule, or The World’s Greatest Athlete, about a Tarzan-like sporting prodigy from Africa (named “Nanu” and played by Jan-Michael Vincent), which were perhaps not the greatest cinema had to offer. But the mere act of watching a movie—especially at school, where we normally did boring stuff—was exciting to me. My first memory of being disappointed might be after the first R-rated movie I was ever allowed to watch: Wolfen, which is actually a fairly decent horror film starring Albert Finney as a detective looking into a series of perhaps animal-related murders in the South Bronx. At the time, there was the added benefit of seeing it in a hotel room, which was even more exciting and exotic than watching a movie at school. But aside from the indelible image of a severed head with chattering teeth, I can recall an “Is that all there is?” feeling at the end of it. A life full of disillusionment, cinematic or otherwise, continued from there.