The Mighty Ducks: lovable human underdogs, or terrifying duck-monsters from an alternate dimension? 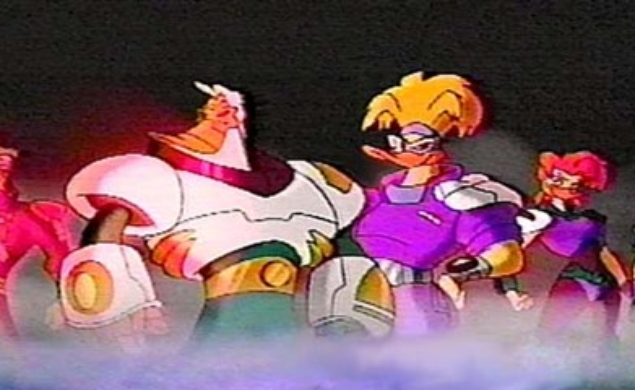 There are days when I fear the future of Mutations will be limited, because there are only so many ways people can contort beloved film fixtures in bizarre, seemingly inexplicable ways. Then there are days when entertainment’s capacity for trying to fix what was never broken is as limitless as Bradley Cooper’s abilities after taking a miracle drug called “cocaine” in American Hustle.

So while I was bummed that my original choice for this entry—the short-lived television version of the Jake Kasdan dark comedy Bad Teacher—was only available on YouTube for a fee, I was overjoyed to discover that Disney’s cartoon adaptation of The Mighty Ducks is exactly the kind of surreal, convoluted mindfuck this column was created for.

The animated version of The Mighty Ducks seems animated by the same thinking that transformed lovable, small-sized mutt Benji into the sidekick of an effeminate asshole robot and condescending alien prince in the previous Mutations entry Benji, Zax & The Alien Prince: Why simply replicate a winning, simple formula when you can transform familiar characters into the stuff of a PCP-addled schizophrenic’s waking nightmare?

In the case of Disney’s animated Mighty Ducks, that meant tossing out the film series’ simple underdog formula of a cynical adult coaching a motley crew of pint-sized hockey players, and re-imagining the franchise as an acid-addled cross between Ralph Bakshi, Lord Of The Rings, Space Jam, and Star Wars, with a tiny soupçon of The Mighty Ducks thrown in for good measure.

It’s a testament to how convoluted and insane Disney’s re-imagining of The Mighty Ducks is that about a third of its first episode is devoted exclusively to Phil Palmfeather—a coach voiced by the Belush himself—explaining the show’s bewilderingly complex premise to ornery cop Captain Klegghorn (Dennis Franz). Even with that exposition, I still could only follow about half the action.

For in the animated world of The Mighty Ducks, the Ducks are no longer children playing for a team named after a water-bound animal. Instead, they’re humanoid ducks from “Puckworld,” an icy planet perfectly suited to the freakish-alien-duck-monster’s favorite pastime: playing hockey. The people of Puckworld speak of the legend of Drake DuCaine, an almost messianic figure who possessed a magical goalie’s mask that allowed him to see and defeat an evil race of alien overlords known as the “Saurians,” sending them into a Dimensional Limbo.

A Saurian ship led by the evil Dragaunus (Tim Curry) managed to escape this limbo, however, and (Christ, my brain is hurting just regurgitating all this) enslaved the residents of Puckworld, until they discovered the magical goalie mask of Drake DuCaine and freed the planet from the Saurians’ control. The Saurians aren’t about to go down without a fight, however, and they end up in an intergalactic portal that leads to Anaheim, California, right here on Planet Earth, where they’re soon doing double-duty as a professional hockey team (hey, nothing in the rule book says duck-monsters from another galaxy can’t play professional hockey) and a crime-fighting unit, eternally at war with the evil Saurians and their leader Drauganus, as well as various other baddies.

Mighty Ducks opens with crotchety Captain Klegghorn picking up a newspaper with the headline, “Mystery ducks foil bank hoist,” and, right next to it, “Cop angered by duck headline.” That’s an early indication that the show has a sense of humor about itself. Klegghorn sits down with Phil Palmfeather, who catches Klegghorn up on the Ducks’ supernatural origins, innate love of playing hockey, Saurian war, and even more needlessly involved bullshit. The Ducks don’t even make it from Puckworld to Earth until the closing moments of the first episode. Part of me wanted to keep watching further episodes in a desperate, no-doubt-doomed attempt to figure out what the fuck was going on. But a much bigger part of me wanted to go home to my wife and infant son.

According to Wikipedia, however, the show only got stranger and stranger, as it added characters like a villain named Daddy-O Cool (voiced by Jim Cummings), whom Wikipedia describes as a “deformed beat poet who is into monster trucks. In ‘Monster Rally,’ he challenged the ducks to a monster truck battle, and had planned to put toxic waste into the world's water supply to make the world a ‘cooler' place. It's stated that he was once human, until he fell into some toxic waste. When his plan is thwarted, the toxic waste changes him into a 1950s insurance salesman.”

If anything, Mighty Ducks suffers from an excess of imagination, though I suspect part of the series’ radical shift from Bad News Bears knock-off to intergalactic surrealistic mindfuck was motivated by merchandising. It’s a whole lot easier to market a line of bad-ass-looking humanoid-duck-hockey-player action figures than it is to sell action figures of Emilio Estevez (as the poorly selling That Was Then, This Is Now action-figure line proved) and kid actors who were probably already in rehab when the cartoon hit the airwaves in the mid-1990s.

Franz is great as the straight-man/audience surrogate; he breathes just the right note of aggravated skepticism into lines like, “So these hockey-playing ducks were attacked by a dinosaur named Dragaunus, am I hearing you right?” but I still could only follow about a third of the action. The first episode of Mighty Ducks is denser and harder to understand than Inherent Vice, and I fear doesn’t offer quite the same rewards, creatively speaking.