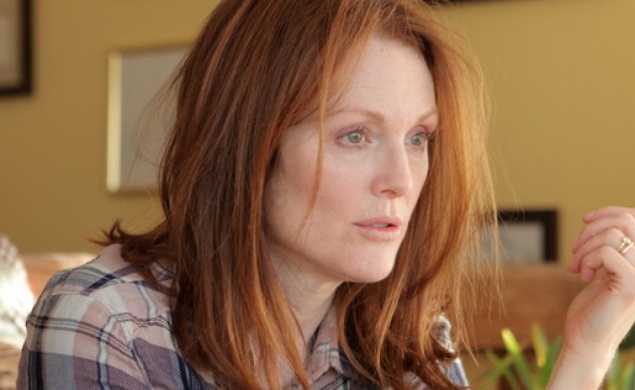 Stephen Follows digs into the numbers behind an Oscar campaign:

“In 2002, the New York Times reported that ‘the most aggressive studios have mounted campaigns that by some estimates have already cost more than $10 million, easily double what a successful effort totaled only two years ago.’ That’s twice the average cost of winning a seat in Congress. Many non-studio films find themselves priced out of the running.”

The New Yorker’s Richard Brody wonders why Still Alice and Cake have to deny their melodramatic roots:

“Moore and Aniston, excellent actors, cut their performances to the pseudo-refined scope of the drama. They map their expressions one-to-one to the needs of each scene. They’re virtuosi who are here misdirected to turn ballades and fantasies into drawing-room miniatures. Moore’s subtlety is a natural register; her formidable technique is utterly internalized. For Aniston, whose comic gifts are hard to stifle, the mode is uneasy, and she seems constantly on the verge of breaking out; her technique involves a self-restraint that she imposes on herself, and that effortful self-mastery is part of what wins acclaim. Moore shows off the graceful ease with which she can work hard; Aniston shows off the fierce effort with which she achieves graceful ease. They play each scene with restrained and unambiguous precision, as if filling out each moment of screen time by clicking out cinemoticons. Neither actor—and neither movie—ever comes close to letting go.”

Avidly’s Evan Kindley on Inherent Vice and the reverse Manic Pixie Dream Girl at its center:

“In this way, Inherent Vice can be seen as a kind of reverse Manic Pixie Dream Girl movie (and thus, a neat reversal of Punch Drunk Love, a classic of the MPDG canon): if a wild, beautiful bird can swoop in out of nowhere and change or save your life, then she can just as easily fly away and unchange it, too. Eggs break, chocolate melts, birds fly, and all of this applies to ex-old-ladies in a sad but predictable way.”

Rogerebert.com has an excerpt from the new issue of Bright Wall/Dark Room, which is devoted to Mike Nichols:

“Mike Nichols’ Wit, however, puts death center stage and never pretends otherwise. We’re told in its earliest moments, by the main character herself, that she will spend the film dying: ‘I have stage-four metastatic ovarian cancer. There is no stage five.’ From that point on, we have no real illusions that Dr. Vivian Bearing (Emma Thompson) will survive. Wit—co-written by Nichols and Thompson, and based on Margaret Edson’s Pulitzer Prize-winning play—is not the story of her miraculous recovery but instead a chronicle of this once well-defended, fiercely proud scholar’s long, humiliating, and messy capitulation to the cancer that will one day claim her.”

-  Spike Lee’s new movie premieres on VOD today, a month ahead of its theatrical release

- The Visual Effects society announces its nominees, including Guardians Of The Galaxy and Interstellar

- Common and John Legend release the video for Selma’s “Glory,” which won a Golden Globe Sunday

- Ansel Elgort circles the lead in Edgar Wright's next feature