Nathan Rabin vs. The IMDb Top 250: The Truman Show 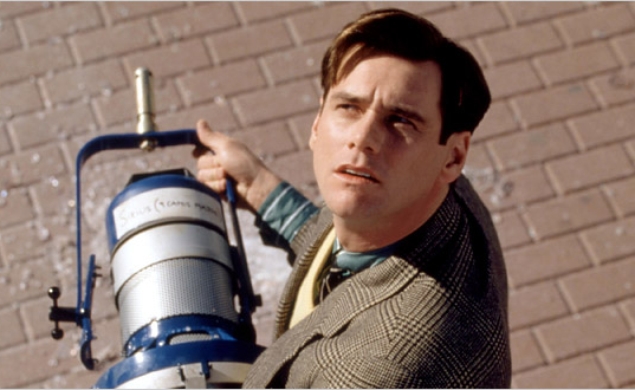 The sometimes-great director Peter Weir set The Truman Show in some strange middle ground between the freshly scrubbed worlds of Leave It To Beaver and The Brady Bunch, where no dilemma is so severe it can’t be wrapped up in 22 minutes of family-friendly television, and the experimental films of Andy Warhol, where life is art and audiences are expected to be riveted by a man sleeping for hours. Weir’s 1998 film could also be said to presage the world of reality television, except that reality television had already been a major cultural force since the introduction of The Real World earlier in the decade. The appeal of reality television lies heavily on the outsized, crazy nature of its inhabitants, whether the miscreants involved are the steroid freaks of Jersey Shore or the oversexed cast of Flavor Of Love; but Truman Burbank (Jim Carrey), the star of the titular show-within-the-show of The Truman Show, could not be any blander. He’s a grinning, goofy, high-stepping parody of all-American gee-whiz masculinity, the kind of guy who gets his jollies mowing his lawn and enjoying a cold one after a long day of work selling insurance.

Truman is a young man who has been filmed for his entire life (without his knowledge or permission) and who serves as the star of the world’s largest and most ambitious reality show. Truman essentially lives in a giant dome called SeaHaven surrounded by actors pretending to be his wife (Laura Linney), his best friend (Noah Emmerich), and his mother (Holland Taylor). Throughout the world, millions, even billions, follow Truman’s every move, despite his leading a white-bread existence dunked in lukewarm milk. Truman almost literally could not be more boring, yet he is the most famous person in the world. This speaks to one of the film’s central flaws: Why on earth would people be so riveted by such an insanely boring human being? Has the entire world suddenly become transfixed by the non-adventures of non-entities? If Truman is so boring, then why is he also so popular?

Then again, Leave It To Beaver and The Brady Bunch were also screamingly dull, and that didn’t keep them from becoming huge pop-culture phenomenon, so it’s possible that part of what attracts people to Truman’s program is its lack of incident and its reassuring mildness. Truman begins the film in a state of giddy obliviousness, before a series of mysterious cracks in the elaborately constructed world of the television lead him to suspect that his life is not at all what it seems, and that his wife, for example, is more interested in pushing consumer products via product placement than in his inner life. Carrey begins the film a bland goof, but his performance improves as his existential crisis deepens and he begins to wonder what, if anything, about his life, and particularly his past, is genuine. A sweaty desperation enters his performance that’s infinitely more compelling than the grinning positivity of his first few scenes.

The Truman Show wears its ambitions proudly. It doesn’t just want to riff on reality television, it wants to comment on free will, social conditioning, the insidious poison of consumerism, and humanity’s heroic quest for self-actualization in an often artificial and manipulative world. But it’s a testament to how badly it fails in its noble efforts to say something profound about the world in which we live and the way the media distorts our sense of how we see both ourselves and the world that I couldn’t stop obsessing over its plot holes or wondering why in the hell the entire world was obsessed with the most boring show on earth. The Truman Show isn’t bad, really, and there are sly jokes throughout, like the people in Truman’s world being unable to fulfill roles like, say, driving a bus, because they’re really just actors. It aims high, but The Truman Show, like its protagonist, struggles to overcome a bland vanillaness at its core.

1. The Best Years Of Our Lives
2. In The Mood For Love
3. Network
4. Her
5. All About Eve
6. Hotel Rwanda
7. Incendies
8. Pirates Of The Caribbean: The Curse of The Black Pearl
9. The Truman Show
10. Slumdog Millionaire