Nathan Rabin vs. The IMDb Top 250: The Best Years Of Our Lives 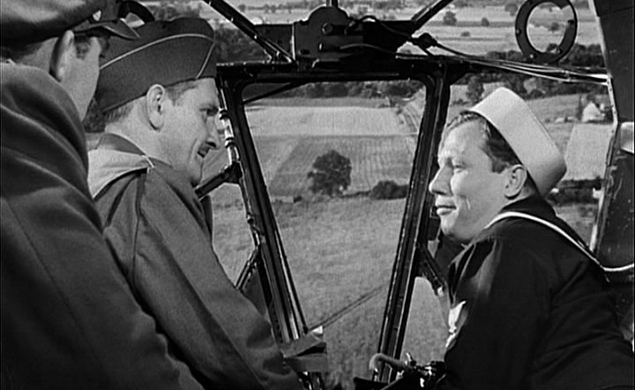 There are many war movies, but fewer films about the endless shadow of war and how the trauma and pain of battle can linger through the years. It’s no exaggeration to call 1946’s The Best Years Of Our Lives the quintessential film about coming home, even more quintessential in its own right than, well, Coming Home (which has a bit of a reputation for quality as well). Released in 1946 and adapted by Robert E. Sherwood from a novel by MacKinlay Kantor, The Best Years Of Our Lives triumphed critically and commercially just a year after World War II came to a brutal end. It was the film of the moment, a zeitgeist-capturing masterpiece that plugged into a powerful sense of ennui and resentment undergirding the culture-wide celebration following the Allied Powers’ triumph.

The United States and its allies had beaten the forces of evil and made the world safe for democracy. The Best Years Of Our Lives asks, “What happens next?” The answers it comes up with tend to be despairing at worst and melancholy at best. How can civilian life be anything other than a crashing anticlimax after the adrenaline-pumping thrill and danger of warfare? How can a job as a soda jerk at a drugstore hold any appeal after years of bombing the enemy into submission?

One of the film’s great strengths is its ability to make the normal seem surreal and the surreal seem normal. Gregg Toland, who shot Citizen Kane just a few years earlier, is particularly adept at long takes and deep-focus compositions that give the sense that his camera can go anywhere and see anything. Wyler and Toland demonstrate this most spectacularly during an early plane ride where our three protagonists—angry former soda jerk Fred Derry (Dana Andrews); Homer Parrish (Harold Russell), a young man who lost both hands when his aircraft carrier sunk; and upper-crust banker Al Stephenson (Fredric March)—look down on their hometown, seeing its totality from the sky, as if they were gods contemplating a world they used to know but that has changed irrevocably.

Later, Fred goes into the old drugstore where he used to work and is quietly mortified to see it has been transformed into a grotesque supermarket where he’s expected to toady up to his old assistant and sell overpriced perfume to overfed housewives. This is what Fred defeated the Axis Powers for, the right to return home to a job he was too good for in the first place and that has only gotten worse since his absence. Toland and director William Wyler allow us to to see the country through the eyes of the returning veterans as a place whose seeming normality takes on a freakish, disorienting glow.

Fred isn’t the only one suffering from existential ennui. Homer returned from the war with two hooks for hands, and while his girlfriend says nothing has changed between them, he cannot believe that anyone could be so noble and self-sacrificing. A world that was once comfortable and knowable to these men has become alienating and strange. They feel like strangers in their own homes, lost in their own land, carrying on mindlessly in jobs that can’t help but seem meaningless compared to the work they did overseas.

The Best Years Of Our Lives is a film of great patience and meticulousness. Its compassionate but unsentimental humanity is reflected most powerfully in the long, tender sequences devoted to Homer navigating the world with his hooks. There is not an ounce of faux pity or maudlin condescension to these scenes, only a clear-eyed admiration for a man who is forced by the brutal realities of warfare to think and move and operate in a whole new way. All these men have been changed by their experiences in the war; it’s just Homer’s fate to wear his scars on the outside, where they are unavoidable.

Wyler’s film tells the story of an entire generation of lost men who came home from the greatest triumph of their lives only to discover that they had to fight a new war, for recognition, direction, self-respect, and for the wives, lovers, and jobs they assumed would always be there for them no matter what. It manages the singular quality of being at once intimate and epic. The Best Years Of Our Lives represents the studio age at its best. It’s adult, mature filmmaking that didn’t just feel important and socially significant, it was and remains important and socially significant, preserving the weary, uneasy mood of the moment that created it.

1. The Best Years Of Our Lives
2. In The Mood For Love
3. Network
4. Her
5. All About Eve
6. Hotel Rwanda
7. Incendies
8. Pirates Of The Caribbean: The Curse of The Black Pearl
9. Slumdog Millionaire