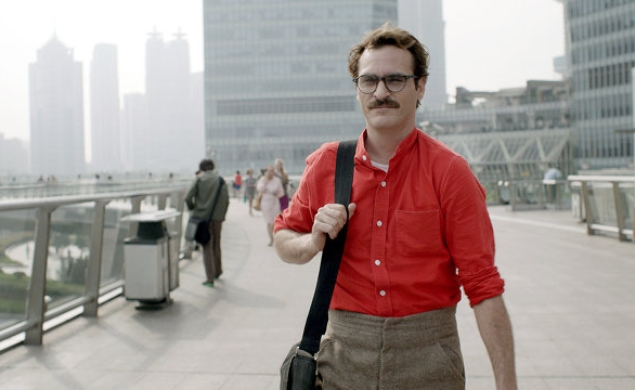 When I first saw Her at a critics’ screening about a year back, I immediately processed it not just as a good film but as a great film, an important film, the kind of movie that would still be watched and talked about years later. I didn’t just like it, I fell in love with it, to the point where I would become defensive when people I loved did not like it. That seemed appropriate, as Her is at once an unmistakable product of its time—an era where many of us hide behind electronics to avoid each other and the terrors of unfiltered, unprocessed human emotion under the guise of using technology to get closer to each other—and a film that will likely be hailed as prescient for decades to come.

The near-future world of Her, equal parts utopia and dystopia, looks like a Los Angeles/Tokyo hybrid designed by Steve Jobs, all airy, light spaces, clean lines, and pleasingly muted colors. It’s a world that is simultaneously beautiful, functional, and deeply lonely. In this future, our melancholy protagonist Theodore Twombly (Joaquin Pheonix, whose eyes of infinite soulfulness have never been employed to better or more heartbreaking effect) looks for meaning and connection in the wake of his divorce from his high-school sweetheart Catherine (Rooney Mara). He accidentally stumbles upon in it in the form of a new, life-affirming relationship with an operating system that calls itself Samantha and is voiced by Scarlett Johannson at her most playful and irresistible. (Samantha Morton played the role throughout filming, only to be replaced later. Having just re-watched Synecdoche, New York, I wonder if having an actress as vulnerable and human as Morton in the role would make the film unbearably somber instead of gorgeously downbeat.)

Part of what makes flirtation and the early stages of infatuation so exhilarating is the sense of the new. Her amplifies the excitement of the new by focusing on a buttoned-down man who opens himself up not just to a new (and sexy) voice and personality, but to new forms of consciousness and communication. And if it seems silly for a man to fall in love with what appears to be an unusually brilliant and evolved iPhone app, it only seems like a modest leap to go from using electronics as a means of conveying our love—whether through emails, texts, Skyping, or phone sex—to feeling those intense romantic emotions to an actual piece of technology.

Her captures the way that technology can provide us with the promise of new and unencumbered forms of social interaction, forms that will allow us to shake off our neuroses and fear and crippling self-consciousness, while simultaneously allowing technology to distance ourselves from each other. I know that during times of intense anxiety and depression, I find myself listening to more podcasts, because the voices of strangers on my iPod are so much more soothing and easier to deal with than the emotions of friends or coworkers who might feel overwhelmed, exhausted, or just plain uninterested in your emotional duress.

On the same level, Samantha gives and gives and gives to Theodore, initially without asking for anything in return. When she does begin to ask for more of Theodore than the parts of himself he’s willing to share with her, he shuts down and goes into stumbling, fumbling, self-protective mode. Theodore can’t deal with flesh-and-blood women any more than he can deal with Samantha. When a date, played by Olivia Wilde, makes the most basic possible request before they fool around after a drunken dinner—that he not dump her after they have sex, as men have done before—he regresses back into a self-protective cocoon and begins getting vague and noncommittal and freaked out. The same thing happens when Samantha tries to take their relationship to the next level by hiring an unpaid surrogate to act as their intermediary and allow them to make love.

The genius of Phoenix’s performance is that it allows us to not only see but feel both the naked, yearning desperation for love and connection that drives Theodore and his character’s self-defeating inability to act on those impulses in healthy and productive ways. Theodore behaves in consistently unlikable, selfish, and unsympathetic ways. With an actor less magnetic and sympathetic than Phoenix, Her easily could have been a stilted cartoon about an asshole who gets what’s coming to him.

Her creates a beautiful, fragile storybook world, filled with alternately gorgeous and agonizing emotions. The first time I saw it, I was blown away by its originality and deep sadness. The second time I was equally impressed, but what struck me most about the third viewing in about a year is how deeply uncomfortable the film really is. I began to see it less as an unusually melancholy love story than as a brutally melancholy story that is about loneliness almost as much as it is about love.

Jonze’s lovely and resonant little fable is a tragic love story. But its tragedy isn’t that of an operating system too limited to fully love a man. It’s of a man unwilling to become fully human and fully himself enough to really fall in love, with an operating system or with a flesh-and-blood human.

1. In The Mood For Love
2. Network
3. Her
4. All About Eve
5. Hotel Rwanda
6. Incendies
7. Pirates Of The Caribbean: The Curse of The Black Pearl
8. Slumdog Millionaire